From Zelda Dungeon Wiki
Jump to navigation Jump to search
Want an adless experience? Log in or Create an account.
Dai 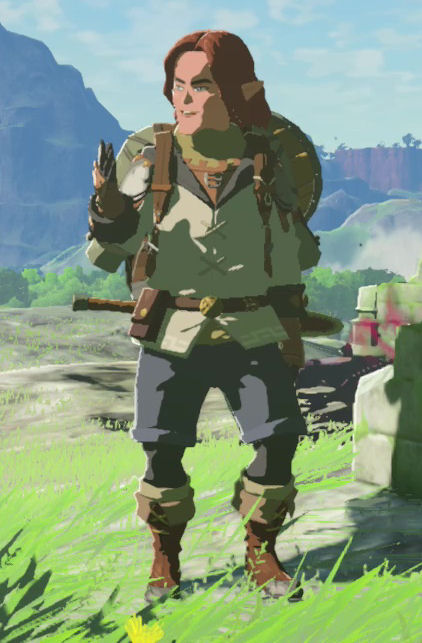 Dai is a character from Breath of the Wild

Dai can be found curled up and trembling, just north of the Coliseum Ruins.[1] He can be seen wielding a Traveler's Sword and a Fisherman's Shield. He has traveled to the Coliseum to slay some of the monsters inside, aiming to get the treasure and weapons that are left behind.[2] He has a strategy of keeping his eye on his opponent at all times, thinking the extra focus will help him to victory.[3] However, Dai gets frightened and can't bring himself to enter the arena. Instead, he stays outside and gets scared when Link approaches him to talk.[4]

Dai will encourage Link to head inside the arena to scout it out for him. He suggests to Link that if he defeats some of the monsters in there, he wouldn't mind.[5] If Link heads inside the arena and defeats the Lynel, Dai will be ecstatic. Dai claims that he was going to do it himself, but because Link already took care of the Lynel, he awards him with a Silver Rupee.[6] Dai says he can take it from there, implying he is planning on raiding the coliseum, now that the Lynel has been defeated.[7]

Each night at midnight, Dai will fall sleep, right up against the wall where he was standing. Even at nighttime he will be dreaming about taking on the monsters in the Coliseum and getting all the weapons and treasure that go along with it.[8][9][10]