From Zelda Dungeon Wiki
Jump to navigation Jump to search
Want an adless experience? Log in or Create an account.
Maggie 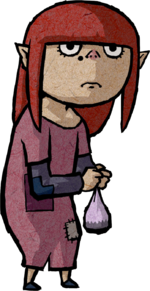 Artwork of Maggie while poor

Maggie is a character in The Wind Waker.

Maggie is is one of the girls, along with Aryll and Mila, to be kidnapped by the Helmaroc King and taken prisoner to the Forsaken Fortress due to her possibility of being Princess Zelda because of her Hylian ears. She originally lived on Windfall Island with her father. Their family was very poor, yet Maggie's father ran around the island while Maggie was gone, begging anyone to help find her.[1][2]

When Link rescues the imprisoned girls, Maggie returns home to Windfall Island. She gives Skull Necklaces that were gifted to her by a Moblin to her father who sells them, making them the richest people on the island.[3][4] Maggie's family virtually trades places with Mila's family, going from being extremely poor to very rich. They move into Mila and her father's old home, the Auction House.

Even though Maggie is back home to a completely different life, she misses the Moblin that she met at the Fortress, Moe.[5][6] Though she writes often to express her love, he never responds.[7][8] She asks Link to deliver a letter to Moe, and is very happy when he agrees.[9][10] When he returns, Link witnesses Ilari arguing with her father, who claims postmen are not allowed in his house.[11] Later, Link finds Ilari at the Cafe Bar, where he dejectedly explains that the letter was from Moe to Maggie.[12] He asks Link to give the letter to Maggie for him.[13]

Link successfully delivers Moe's letter to Maggie, which she is overjoyed to see and claims she saw it in her dreams.[14] The letter says that Moe wants to eat Maggie.[15] However, she misinterprets as a wedding proposal.[16] She declares the day an anniversary of true love and gives Link a Piece of Heart.[17][18] She dreams of sailing away to marry Moe, but she instead stays at home with her father.[19][20][21]