Skyward Sword as the Template for Zelda Wii U’s Soundtrack 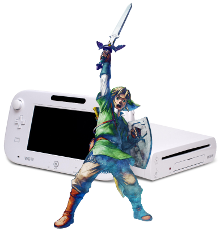 Last week Djinn wrote about how the state of music in the Zelda series has changed over the many years since its inception, and near the end of the article he spoke briefly of how recently the quality of Zelda music has drastically increased with the orchestrated soundtrack of Skyward Sword. And let me tell you, when I first played Skyward Sword that was the impression I got too: It’s so much higher quality. It would be a mistake in my eyes for Zelda Wii U to not continue what it did. But there’s a bit more to it than just live instrumentation.

The orchestrated soundtrack is the first thing people talk about with Skyward Sword’s music. From the tracks played like a symphony, such as a number of the boss themes (in particular the mini-boss theme played during the Stalfos fights), to the rest of the soundtrack, the vast majority of which is played using live instruments, this soundtrack did add quite a bit of impressive raw quality to the music, and I certainly don’t doubt that this blatantly and in-arguably superior sound quality won’t be used again in Zelda Wii U. I mean, hell, they used an orchestral style in A Link Between Worlds, so why not the next major console release?

The other aspect of what was great about Skyward Sword’s soundtrack to me, however, has nothing to do with quality of sound but quality of composition. Skyward Sword is my favorite Zelda soundtrack because much of its music is very deep, and very emotional.

A fair amount of people have criticized Skyward Sword’s soundtrack, saying it wasn’t that memorable. This always left me, well, dumbfounded to be honest, because I remember every track vividly. It’s a very memorable soundtrack for me personally. That said I do understand the gist of what they mean: Previous Zelda soundtracks have had many themes that, while impressive, always had a degree of repetition. They had recurring beats, melodies, or other sounds, that made every part of the theme — even if the parts differed — feel the same, because they carried the recurring element. Some of the most famous Zelda themes, such as Gerudo Valley, Lost Woods, Dragon Roost Island, or Midna’s Lament, all carry this repetitive aspect. It’s a common technique used to make songs catchy in the music industry and it’s applicable here. The simplicity of these famous Zelda tunes alongside their artful repetition makes them particularly easy to commit to memory, and that’s because they’re catchy; they stick with us and we enjoy them. To prove the point, one of the themes that even these critics of Skyward Sword’s soundtrack still often like is Faron Woods, which was easily the game’s most catchy, repetitive tune. 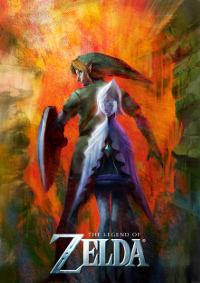 That’s all well and good, and it’s certainly not a lesser form of music. But at the same time, it’s a much simpler form of music. What I loved about the music of Skyward Sword was its depth. There was a complexity and emotional depth to the music of Skyward Sword that gave it much more impact for me. Many of the themes are longer, with less repetitive elements but instead more variation and distinct elements throughout the songs. Oh, to be sure, many of them have repetition like Faron Woods, but also like Faron Woods, even those still have more of the depth I’m talking about than the average music from earlier Zelda games.

More than that, the themes in Skyward Sword always seem to be built with an atmosphere or emotion in mind. Certainly that’s true of other Zelda games, but it was rare in previous games for me to feel like the music itself helped deliver a scene with a huge impact. Time for some examples, no?

“The Goddess Sword” is one of my favorites in the game. It was a theme only for cutscenes, playing during some of the conversation after Link first acquires the titular blade, and also while speaking to the old woman on the surface about upgrading it. This music is melancholy as hell. It fits these moments, and the destiny and duty surrounding Link’s journey to save Zelda and then later to find a way to her in the past. And these scenes ARE melancholy. In the first, Zelda is missing and no one knows if she’s safe (plus Link’s destiny is getting thrust upon him), whereas in the second, Link has just faced an apocalyptic foe and must still find a way to Zelda. When the drums come in the theme practically kills me, and it really is music that represents a solemn duty. It’s a super emotional track, and it varies a lot as it introduces new elements constantly throughout, such as when it introduces the drums only after playing for a while.

The music that plays while following Fi during the game’s opening is great, too. While Fi’s theme itself is beautiful and almost sad on its own, this version takes it even further. I love how mysterious it sounds, while also being a bit sad. It allows the theme to fit Zelda’s disappearance, the mysterious emergence of Fi, the nighttime scene you pursue her in, and even all the later moments with Fi throughout the game. It’s a perfect theme to complement this nighttime mystery.

The theme that plays on the deck of the Sandship while the Timeshift Stone is active blew me away. It’s an awesome rendition of the main Sandship theme that feels electronic, epic, and mysterious. It really gives a sense of this lost time period and this lost culture of the Ancient Robots along with their long-ago plight, and makes the whole area seem a lot more meaningful than it would without this music going along with it. 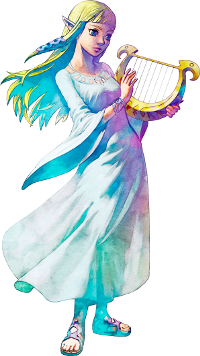 The theme of the area outside the Goddess Statue as well as the Isle of Songs is a very beautiful theme with a great sense of the ancient and the benevolent. Around the Goddess Statue, it feels like the theme of a sacred and holy place, while on the Isle of Songs, it feels like a beautiful and peaceful reprieve amongst the horrible storm. And other than its repeating strings, it has a lot of variation as it goes on.

These are just a few examples, and there are many others, from the menacing yet heroic epic battle march of the Stalfos mini-boss theme to the peaceful and relaxing tune of the Sky islands, all of the music in Skyward Sword captures an emotion or feeling of some kind, and carries it through a lot of distinct parts to give the themes both length and variety. Many of them feel very unique to me, and I enjoy listening to all of theme on their own more than other Zelda music, because they all carry heavy emotional impact all their own. Of course previous games had music that did this too, but the composition of Skyward Sword’s music just takes it so much farther.

So my overall point is this: Skyward Sword did some great things with its music, and even if not everyone considers its specific themes among their favorites, I still think it made better music. The live instrumentation in its music, some of which is played by symphony, ensures its quality is so much higher, while the length and variation of the themes alongside their added emotional impact makes them much deeper. I very much hope this is a trend that will continue in future Zelda games, and I hope Zelda Wii U shows off this amazing music too.

What are your thoughts on the soundtrack of Skyward Sword as compared to previous ones, and how do you feel Nintendo should make Zelda Wii U’s soundtrack? Tell me in the comments!