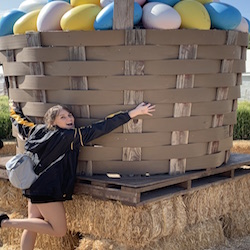 The grass is greener where you water it.

Hi all, I’m Samantha, a writer for Zelda Dungeon. I just recently joined the team, and I’m stoked to be providing content for all the dedicated Zelda fans out there!

Growing up in the desert of Southern California, there was little to do other than play video games. As a child, I spent many hours with my older brother taking turns playing Ocarina of Time on the N64, and from there, my love for the Zelda series truly flourished. Come the year 2007, I received Twilight Princess as a birthday gift. From the moment I placed the disk inside the Gamecube, I became infatuated with the soundtrack, art style, and heartwarming storyline, easily making Twilight Princess my favorite title within the series.

The culmination of the years spent playing multiple Zelda titles and running Halo 2 campaigns with my older brother resulted in me moving to Los Angeles at the age of 18. At first, I wasn’t entirely sure what I was doing in there, but I knew I wanted to work in the video game industry. Now, sent in my path of becoming a game writer, I spend most of my days writing and researching. When not writing, I can be found playing a multitude of different fantasy RPGs, practicing yoga, or tending to my house plants.

I’m incredibly delighted to be on the Zelda Dungeon team and provide content that equally excites and inspires me. You can find me on twitter @srreynn