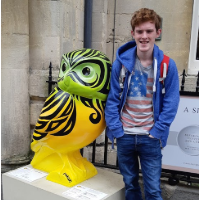 If at first you don’t succeed, you should probably stay away from the parachutes.

Hey there! I’m Euan Crombie, and I’m part of the writing team here at Zelda Dungeon (in case that wasn’t obvious by now). I’ve been hanging around since March 2018 – this doesn’t make me feel old yet, but I’m sure it will in time.

I hail from the frosty wetlands, also known as Scotland. I’m originally from Glasgow, but I’m currently living in England to study music at university. I’m a huge fan of Nintendo games (I have Mario slippers and a Zelda lanyard) – this love really took off during the DS era, but I’m still going strong. These days I spend most of my time playing Splatoon 2, sometimes with randos (Booyah back will you?), but I also captain a small competitive team. Being a music student, I’ve always loved Nintendo soundtracks, especially those of Zelda – Skyward Sword is one of my absolute favorite soundtracks of all time. Being from Scotland, I’m naturally sarcastic, and I’ve been told I have a tongue sharper than 99% of knives (the doctors never confirmed this though).

While I’m not playing Zelda personally, you can usually find me on Twitch, watching others play it very quickly. I’ve been a member of the Zelda speedrunning community for quite a while, and I also run a small Indie game called Fairune, which I currently hold the any% world record for (there’s my boast for the day). I’m currently in the process of learning and running Skyward Sword too!

Like so many others, my favorite Zelda title is The Wind Waker. I put this down to the beautiful graphics, the moving but concise story, and the incredible characterization of Link and co. (I mean, just look at those eyebrows!). Looking at my best Zelda ever lists is a bit like entering a parallel universe, but I’m always ready to defend my favorites (and explain why Ocarina of Time is not one of them).

On Zelda Dungeon, you can find me rambling about speedrunning every second Tuesday (inherently difficult when you Americans don’t use the word ‘fortnight’), and you’ll occasionally see me ranting and raving about Ocarina of Time, whether it’s relevant to the current discussion or not.