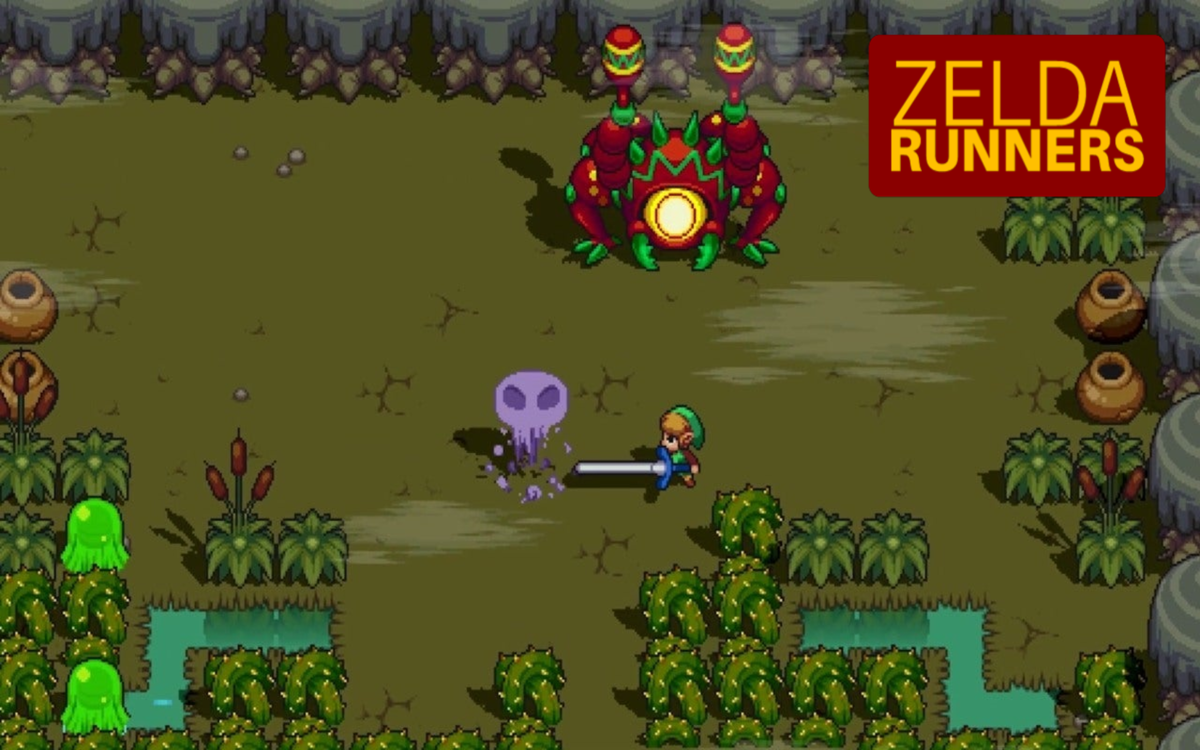 Hello and welcome back to Zelda Runners, your (almost) bi-weekly digest of everything going on in the Zelda speedrunning community. It’s been both a quiet and hectic couple of weeks, so without further ado, let’s jump right in!

The A Link to the Past Randomizer community are gearing up for their 2020 tournament! This bumper 64-person tourney will start 24th May, and will consist of around 6 weeks of bracket races, followed by an 8 person single-elimination bracket. Sign ups have already closed, but you can find out more information about the tournament and where it will be streamed on its Challonge page.

It’s tough being stuck inside for weeks on end. Sometimes, I spend so much time sitting in one place without any active movements or thoughts I feel like I’m back at university. Luckily for you, though, I’ve compiled  short list of some Zelda speedrun categories which you might not have had the pleasure of experiencing before. This isn’t a definitive list, nor is it ranked worst to best. It’s simply a collection of some runs and categories which I personally enjoy watching and highlight some of the game’s best glitches and tricks. 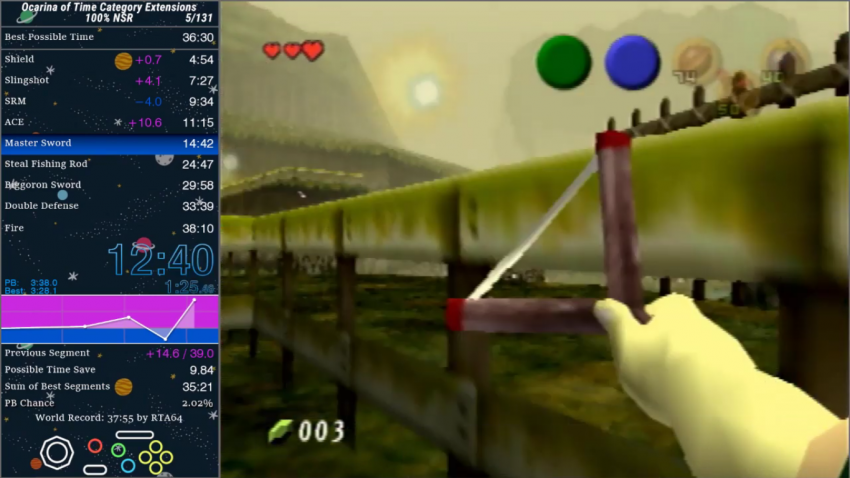 Ocarina of Time – No Source Requirement

This, along with most of Ocarina of Time‘s categories, has recently undergone huge re-routing to make use of Arbitrary Code Execution and related glitches. Nonetheless, if you’re looking for a showcase of how ridiculous this game can get, what better a way than watching someone collect every item in the game in under 40 minutes? Before the recent discoveries, the run took over 3 hours, but those are also worth watching in my opinion.

Breath of the Wild – All Shrines

Ok, this one is less ‘an hour to kill’ more ‘I’ve finished my essay three weeks in advance and now have nothing in my diary until September’. As with most Breath of the Wild runs, this route relies on efficient overworld movement and routing, but also requires a database knowledge of skips and time-saves for each of the game’s Shrines. These runs are perfect to have playing in the background of a long day doing nothing.

This game can be completed in under 3 minutes in the Any% category, but if you’re looking for a longer distraction, the Warpless category is perfect. Plus, if this isn’t enough Link’s Awakening content for you, make sure to check out runs of the DX and 2019 versions! 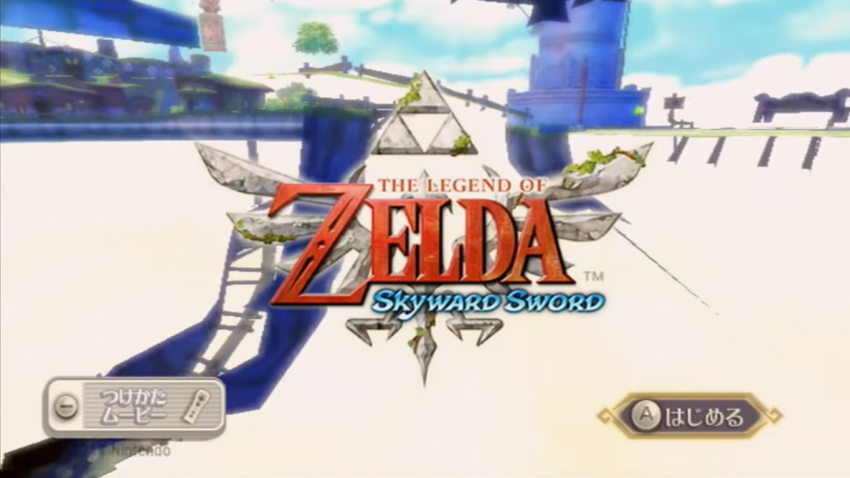 Ocarina of Time wasn’t the only game to see some major changes lately. Just over a year ago, Skyward Sword had only two main categories but, thanks to the discovery of Reverse Back in Time, this All Dungeons category was created in order to preserve some of the content found in dungeons which would otherwise be skipped. If you’re looking for a showcase of what’s new in this game, this is the category to go for.

Finally, if you’re looking for something a little more musical or upbeat, what better a game to turn to than Cadence of Hyrule? Each of this game’s categories are fun and interesting to watch, but I’ve listed 100% here simply because it is the longest.

Just because it isn’t a mainline title doesn’t mean Hyrule Warriors: Definitive Edition doesn’t have some fantastic runner. I had a chat with one of those runners this week about their experience with the game. 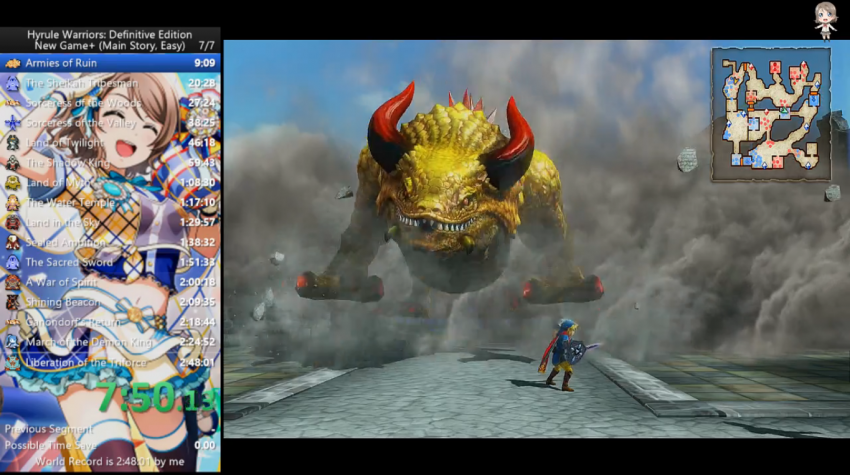 EC: Tell us a bit about yourself!

EC: Hyrule Warriors is obviously a spin-off from the mainline games. What draws you to run it over more mainstream titles?

Blissy: To be honest, I’m a fan of running games with tons of glitches, and I started running Hyrule Warriors long before I knew that there were glitchless categories. Along with that, I lack the means to play most mainstream Zelda titles at the moment since my Wii U is unusable. 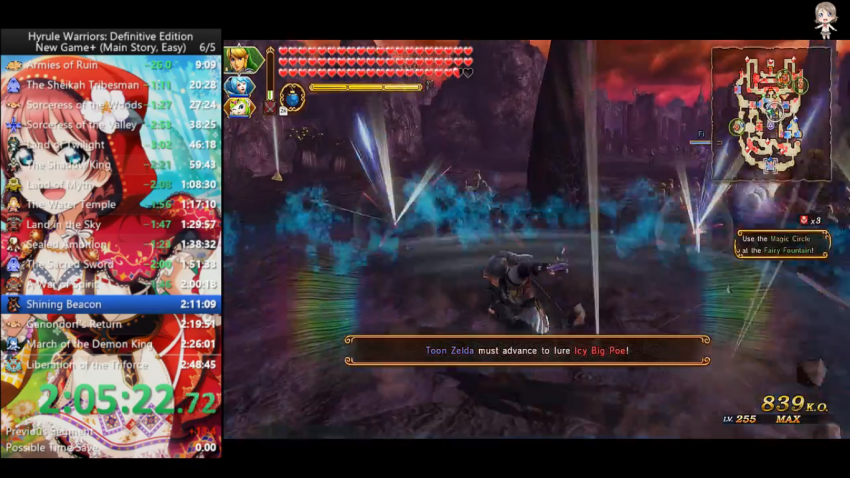 EC: The game has a much smaller community than many other games. What’s it like having such a small community? Do you wish more people tried running the game?

Blissy: It’s a bit quiet most of the time, with only a couple of runners, but sometimes a small community is nice, at least in my opinion. It would be nice if one or two more people tried giving the game a try.

EC: If someone asked you why they should run Hyrule Warriors, what would you tell them?

Blissy: It’s not a very hard game to learn, and since Master Sword is given to Link through the story, you could easily jump into doing NG+ runs after learning the route.

EC: You mentioned that you also run Fire Emblem Warriors, which is similar in design to Hyrule Warriors. Is there anything that draws you to this specific genre of game other than the glitches?

Blissy: Not really. At the time, I got Fire Emblem Warriors because the price was low, but ended up being drawn in by the better AI that the game has over Hyrule Warriors.

EC: If you could only run one category of one game for the rest of time, what would it be and why?

Blissy: Likely one of the NG+ categories, but if I had to choose between them, I’d go with Main Story since All Levels has more RNG moments that can cost time if things don’t go your way.

Thanks for the chat, Blissy! You can catch any of Blissy’s runs on their Twitch Channel!

Midspring Speedfling 2020 – 1st May ~ 4th May – Any marathon that starts with Untitled Goose Game has my full attention. I supposed I’m obligated to mention it also has a Skyward Sword Any% run and A Link to the Past 100% No Major Glitches run, but we all know why I’ll really be watching.

That’s all from me this week. It’s a hard time for everyone at the moment, but we’ll get back to normal eventually (albeit at different rates in different places). If you’re struggling, need some advice, or just need someone to spellcheck your shopping list, my DMs are always open. Of course, if all you need from me is a 15 minute distraction every few weeks, I’m more than happy to provide. Until next time!

Euan is the host of Zelda Dungeon’s Speedrunning series, Zelda Runners. He can be found on Twitter and Discord and he hasn’t had a haircut in almost 5 months so he looks a bit like Doogle from The Magic Roundabout.

Comments
Sorted Under: Hyrule Warriors, Original Content, Slider, The Legend of Zelda, Zelda Runners
Tagged With: No tags were found for this entry.