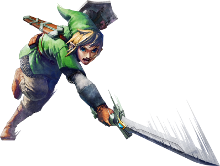 Understandably, Skyward Sword’s controls were a concern for many people when the game was announced. I think a lot of us were a little worried that the controls wouldn’t be what we were promised. Pre-release, these sentiments were understandable, but some people are still bothered by Skyward Sword’s controls. When it came out it received some criticisms for having “inaccurate” or “unresponsive” controls. These statements are false.

It might seem highly irritating for someone to come in and say that statements about personal experiences are incorrect, but I can’t sum it up any better way. To elaborate, I’ll start with my experience with the controls. Naturally, I made some mistakes with the controls when I first started the game; it’s a new control scheme that I was trying for the first time, so I couldn’t expect to be perfect at it right away. I quickly improved and by the time I got to Eldin Volcano, I rarely ever made any mistakes with the controls. That’s the key. I’m not the only one who can get the game to work exactly how I want at all times: Plenty of people have been able to play the game without any problems. This video rebuttal to the infamous Gamespot review illustrates that quite nicely.

To say the controls are inaccurate or unresponsive states that they do not work correctly. It means they do not work as intended, cannot register right, and just make mistakes regardless of how well the player does. This is not the case with Skyward Sword. I don’t usually like to shut down an opinion like this, but the fact is that when people can get the game to work right without issues, even if those people are few, then the problems you are having are not issues with the controls and their accuracy.

You can argue the controls are unintuitive, that is, difficult to figure out, difficult to get to work right. I don’t agree with that, but that’s not something I can argue with. If someone has trouble getting them to work and can’t overcome it, then the game isn’t designed in a way that’s good for them, and that’s a valid complaint even if it’s personal. However, that doesn’t equal responsiveness issues. And honestly I wonder why people thought it wasn’t going to be this way. Anyone can make mistakes with any control scheme, even on traditional controllers, so why is it a surprise when essentially your entire arm is the controller?

Skyward Sword requires precision, and possibly more than some people are capable of applying to the game easily, or at least while having fun. That’s an understandable reason to be bothered by the controls. But when that precision is applied properly, the controls don’t make any mistakes. This isn’t debatable: it is fact.

This might all seem largely irrelevant now since the game has come and gone for many people, but it’s relevant to address the argument considering the very real possibility that future Zelda games will adopt Skyward Sword’s control scheme, because it could end up defining how Skyward Sword’s combat is improved or how it’s changed. Do you think Skyward Sword’s combat was good, or did you have problems with it? Would you have them fix anything, or would you see them do away with it entirely? I myself enjoyed the controls thoroughly, but tell me what you think!