Reproduction in the Zelda Series 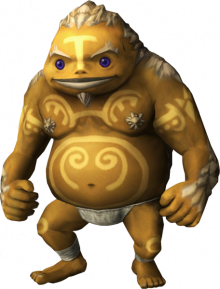 There are many species in the Zelda series which have unknown methods of reproduction. Three of these species have picked at my curiosity in particular, the Gorons, the Deku race, and the Kokiri. There are many theories as to how Gorons reproduce, and none for the Deku race or the Kokiri. I shall go through these theories, suggest my own, and at the end, you can tell me the races in the Zelda series which you have always wondered about, and your ideas. Sound like a good idea? Good. Let’s go!

Now, the Gorons. Nowhere, in the entire Zelda series, can we find a female Goron. This would imply that the Gorons reproduce asexually (only one parent is required). However, there are theories that female Gorons are present, they just aren’t seen in-game, or that male and female Gorons are indistinguishable. There’s also a slightly more bizarre idea that Biggorons serve as Queen Gorons to the common Gorons. I don’t particularly like those ideas, especially as the lack of evolution in the Gorons further suggests that they reproduce asexually.

A final theory, which I support fully, is that Gorons are born through a process which some have called ‘volcanic birth’. In this process, the essence of Din is channelled into magma, sparking life, which develops into a young Goron. While Din is not said to have the power to give life (Farore is the Goddess who is said to create life), an aspect of Goron culture that supports this idea is that they respect physical strength and power. The Gorons have a sort of Brotherhood, usually referring to each other as brothers, suggesting the idea that they, too, don’t usually see themselves as having parent-like roles to younger Gorons, though this idea is challenged in several instances, most notably in Ocarina of Time, when Darunia names his ‘son’, after Link.

These instances of older Gorons having a parental role to younger Gorons, however, can simply be explained as a form of adoption. Older Gorons, upon either seeing potential in a younger Goron, or simply from their birth, adopt them as sons. This is why I support this idea: it answers every question when it comes to the reproduction of Gorons. Extra support for this theory is in Spirit Tracks, when a Goron comments that the ‘Mountain Goddess’ must be very angry, due to the recent violent eruptions of the Mountain of Fire, on the side of which they live. This ‘Mountain Goddess’ is most likely Din, as she is held in high regard by the Gorons of Spirit Tracks. 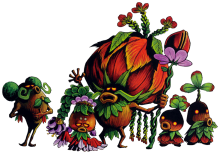 The only visibly female Deku that we’ve ever seen in-game is the Deku Princess, and the only other one mentioned is when the Business Scrub in South Clock Town mentions his wife. Both of these instances are from Majora’s Mask, which is set in a parallel world, so there could well be no female Deku in Hyrule, but Deku have different appearances in later games, even if it is only partial, which suggests the idea of sexual reproduction in the Deku of Hyrule. This is why I believe that the Deku race reproduce via parthenogenesis. 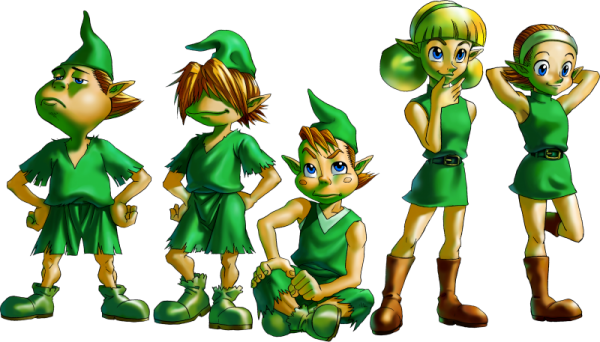 Finally, the Kokiri. It has been confirmed that the Kokiri evolve into the Koroks in The Wind Waker, and it has been theorized that they evolve into the monkeys in Twilight Princess, due to the similar numbers, and the appearance of the symbol of the Kokiri on the upper-arms of the monkeys. I also like to think that the female Monkey in Twilight Princess is the evolution of Saria, as she is not awakened as a Sage in the Child Timeline, and the spirit of the Sage that resided within her in Ocarina of Time left to guard the Mirror Chamber. In addition, Ook, while being a baboon, not a monkey, is the leader of the monkeys, much like Mido from Ocarina of Time. 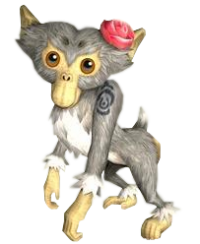 While I cannot explain the difference in the resulting appearance in the two different timelines, I think that the Kokiri are immortal, and as they are children forever, they are unable to sexually or asexually reproduce. There’s always the possibility of binary fission (you chop off the arm of a Kokiri, and while the Kokiri grows back its arm, the arm grows into an entirely new Kokiri), though that’s a little far-fetched. Their absence in the Downfall Timeline suggests that were all killed after the events of Ocarina of Time in that timeline, and their absence from New Hyrule suggests that they chose to stay in Forest Haven after the events of The Wind Waker. So that’s my theory: they simply don’t reproduce. It is said that they were created by the Great Deku Tree for whatever reason, but they won’t grow up, and they won’t reproduce, they will simply evolve throughout the possibly-infinite amount of years they have in this world.

What about you guys? Are there any races in the Zelda series which you have pondered about their method of reproduction? If so, what’s your theory? Let me know in the comments.