Speedrunning marathon Summer Games Done Quick 2022 came to an exciting end Saturday evening, having raised over $3 million USD for charity over the course of the preceding week. While a total of three Zelda titles were featured during the event, the marathon’s most astounding Zelda moments came during Friday’s so-called Ocarina of Time Beta Showcase.

Promising a unique look at various pieces of beta and debug content that have been hiding inside Ocarina of Time‘s cartridge for the past 23 years, runner Savestate, alongside speedrunning robot tool TASBot, was quickly able to manipulate the Nintendo 64 classic’s code in real time. This type of exploit, known as Arbitrary Code Execution (ACE), has been achievable in Ocarina of Time since 2019 and has since helped speedrunners complete the game in under 10 minutes. Savestate even began this weekend’s showcase by spawning an Arwing from Star Fox, an early application of ACE.

But what began as a typical glitch exhibition — a Games Done Quick staple — quickly spiraled into a wild send-up of Ocarina of Time‘s biggest urban legends and a loving celebration of the speedrunning and Zelda communities.

Over the course of the 50 minute presentation, Savestate and TASBot led SGDQ viewers on an unforgettable journey. They accepted a never-before-seen quest from a beta Kokiri, travelled to Gerudo Fortress as Child Link, battled the Running Man in a bonkers boss fight, and melted the ice at Zora’s Domain. But every one of these feats proved only an appetizer for the showcase’s main course. After receiving a new Ocarina tune from a beta Great Fairy at the mysterious Unicorn Fountain, the runner was able to travel to and explore the Chamber of Sages, where the ever-elusive Triforce lay waiting to be collected.

“You got the Triforce!!! After 23 years, the dreams of millions of players around the world have finally come true!” the in-game text read.

The showcase’s finale is something magical to behold, so be sure to watch the entire video for yourself right here to see how the run ended.

Needless to say, this presentation proved to be far more than just a standard beta showcase. It was actually the culmination of a years-long project officially dubbed “Triforce%.”

But what is Triforce%? Here’s what the project’s website says:

“Triforce% is a hybrid RTA/TAS superplay (“speedrun”) of The Legend of Zelda: Ocarina of Time (1.0) (U) (Nintendo 64) which uses Arbitrary Code Execution (ACE) to install a set of data loaders in the console’s memory, enabling arbitrary assets (scenes, objects, music, etc.) in the game ROM to be seamlessly live-patched via the TAS replay device. By modifying the game programming and assets, beta content cut from the final version of OoT is restored and brought to life on screen. A new plot is constructed based on this beta content and on urban legends from the late ’90s, culminating in Link obtaining the Triforce, all within the vanilla game.”

That’s a mouth-full. Let’s break it down.

Triforce% is essentially a collection of custom-made content, developed by the Triforce% team, that was injected into a completely unmodified copy of Ocarina of Time in real time through the use of Arbitrary Code Execution. Thanks to TASBot, which is capable of executing millions of precise button inputs in seconds to manipulate the game’s code, the team was able to inject their original content (models, cutscenes, music, animations, etc.) and execute it within the game. Every custom element — from the new models and animations, to the new cutscenes and quests, to the live Twitch chat integration during the finale — was injected into the game during the run by TASBot via ACE.

You can check out Triforce%’s official FAQ right here for more information.

YouTube’s Retro Game Mechanics Explained has also produced a video further explaining the technical details of Triforce%. You can watch that right here.

The result, presented as a live speedrun, was a guided tour and custom storyline that linked together various Ocarina of Time urban legends, culminating in Link obtaining the Triforce and receiving a wish, which all unfolded on an unmodified cartridge, on unmodified hardware, in front of a live crowd.

The theatrics of the showcase seemed to be just as important as the technical aspects, as the hosts maintained the illusion that the presentation was strictly showing cut / beta content that was left on the cartridge and did not reveal the true nature of Triforce% until the very end. As described by YouTube’s Hard4Games in a recent video, Triforce% is a “technical experience” and “showpiece,” in which the TASBot tool is “reprogramming and creating a ROM hack on the fly while a speedrunner is playing the game.” The SGDQ performance, for lack of a better word, was a crucial aspect of Triforce%.

While much of what was shown during the SGDQ 2022 Ocarina of Time Beta Showcase was original content created by the Triforce% team, the presentation did still feature many isolated pieces of legitimate debug / beta content left on the OoT cartridge. This content includes the inventory editor, the Star Fox Arwing, the giant magenta rupee, the Ocarina pedestal, and the beta Great Fairy. The Triforce% team also recreated various pieces of alpha / beta content which had been shown in official Ocarina of Time prerelease footage, such as the Unicorn Fountain and the Triforce room. 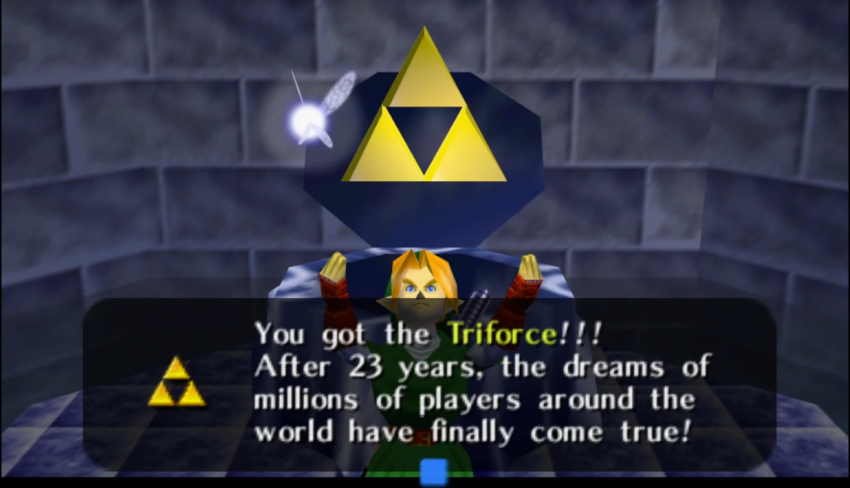 Triforce% was conceived by musician and electrical engineer Sauraen in 2018 as a way to make the Triforce obtainable in Ocarina of Time via Arbitrary Code Execution. Once the ACE exploit was first discovered for the game in 2019, Sauraen began building a team to make this dream a reality. The Triforce% team included producer and TASBot community head dwangoAC, speedrunner Savestate, and various members of the Zelda ROM hack and Tool-Assisted Speedrun (TAS) communities. You can find all credits for the project here.

Inspired by creative ACE showcases of the past, such as glank spawning rainbow dogs in Ocarina of Time and Mr.Cheeze putting Mew under a truck in Pokemon Red & Blue, Sauraen recognized the potential Ocarina of Time — as well as its long-standing and dedicated fanbase — provided for a high-profile ACE project. “There is really no other game which has this kind of accumulated lore outside the game, which many players have been aware of for decades but which isn’t actually part of the game,” they said. “Bringing that content back into the game and making it real for the first time, and doing this entirely through controller input without modifying the game in advance, is a really unique kind of artistic work.”

Over time, the project was expanded to include a plotline that would lead up to the Triforce scene, as well as to link together various OoT urban legends. And once the project was confirmed for Summer Games Done Quick 2022, an epic finale sequence was developed to show how much can truly be done to the game with ACE. “We wanted to have the impact of Link and Zelda themselves delivering the message of the project to the viewers,” said Sauraen.

YouTube’s SwankyBox, who served as a consultant on Triforce%, has produced an excellent video breakdown on the project and its history. You can watch that video right here.

While the Triforce% team does not plan to distribute any ROMs or any code / assets owned by Nintendo, they are currently distributing the original content they created for the presentation. You can download this content right here.

The TASBot Discord community has also set up a dedicated Triforce% channel for future discussion. You can join the Discord right here.

In a lot of ways, Triforce% is a love letter to Ocarina of Time fans who have spent the past two decades searching for hidden items, characters, areas, and other secrets within the game. Whether you’ve spent hours trying to melt the ice in Zora’s Domain, scoured the internet for ways to beat the Running Man in a race, or fell for an internet hoax claiming to provide instructions for finding the Triforce, the Triforce% project is dedicated to you.

Were you watching the Triforce% run live? What was your favorite part? Let us know in the comments below!

Comments
Sorted Under: Games, News, Ocarina of Time, Slider, Zelda Fan Content, Zelda News
Tagged With: No tags were found for this entry.