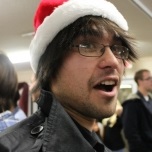 Rod Lloyd is the managing editor at Zelda Dungeon, primarily overseeing the news and feature content of the site. Rod is considered the veteran of the writing team, having started writing for Zelda Informer in 2014 as a junior editor. After ZD and ZI officially merged in 2017, he stepped into the managing editor role and has helped steer the ship ever since. He’s also contributed to other sites like Laser Time, Nerd Hero, and VG Culture HQ.

Rod has been playing Zelda games since he was in the fourth grade. While his first Zelda game was Majora’s Mask, he’s since gone back and played through all of the classics. Beyond Zelda, he’s also a passionate fan of Super Mario, Metroid, Metal Gear, Resident Evil, and Dark Souls. Rod also loves movies, music, and professional wrestling.

The Zelda Dungeon Caption Contest, the Zelda Versus tournament feature, and Zelda Dungeon themed weeks are all Rod’s babies. Be sure to tell him how much fun you have reading his stuff!

You can find Rod on Twitter right here, or you can shoot him an email at: rod.lloyd@zeldadungeon.net