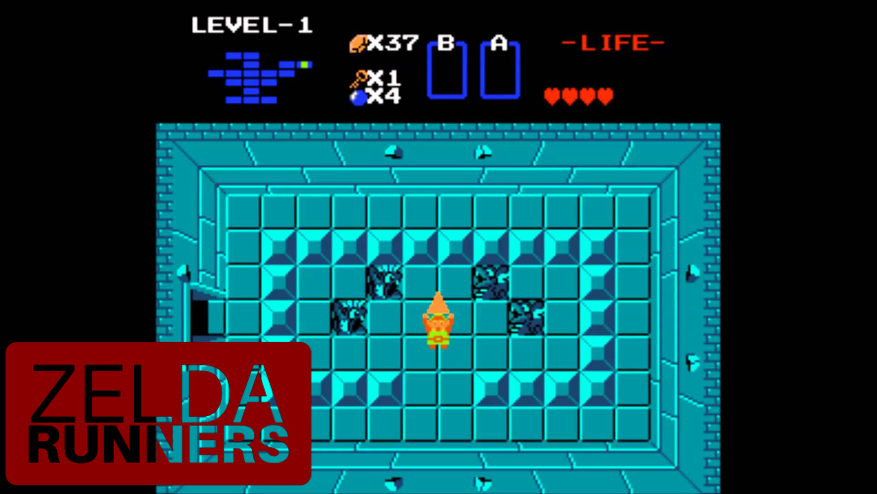 Hello! If you’re reading this, it means one of two things. Either you enjoyed the first article in the series so much and you can’t wait to read on about the multitude of new records and routes that have surfaced over the last two weeks, or you’ve mis-clicked and wondering why I’ve not introduced today’s daily debate yet. Either way, congratulations on making halfway through the introduction! This week, we’re talking new routing for Ocarina of Time 100%, a runner’s weekly Breath of the Wild gauntlet, and why The Legend of Zelda runners struggle counting to 10.

Following the discovery of a glitch called Morth Hover, Wind Waker HD has been enjoying a new rush of life, with two leading runners, Linkus7 and gymnast86, constantly taking the any% record from each other. Currently, Linkus holds the record with a 1:03:18, but with gymnast still running the category every second stream, who knows how low the time will be pushed? Linkus is currently working on the game’s 100% category. 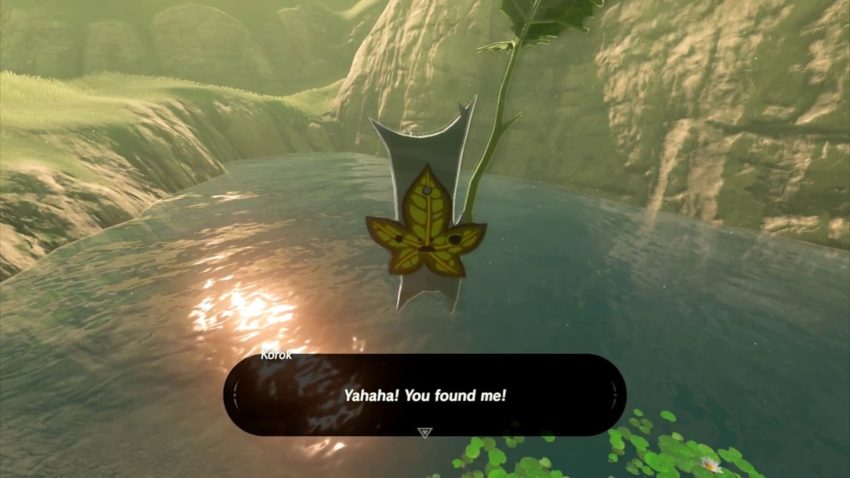 Breath of the Wild runner, SpecsNStats, has set himself a daunting challenge – to run the game’s longest category, 100% + DLC, once a week. The category requires the runner to claim back all five Divine Beasts, collect all 900 Korok seeds, identify every location on the map (which gives the map’s 100% completion mark), complete all 136 shrines, and complete almost everything else that appears in the game (Kilton Medals, Sidequests, Shrine Quests, Saddles…) It also includes filling the entire compendium, which takes less time than you might think. The current record, 31:36:03, was set last weekend, and saved over 1.5 hours over his last record. These runs are usually over the weekend and, due to their length, it’s quite easy to catch at least part of them.

Finally, Ocarina of Time runner Zfg1 has spent much of the past few months testing a new 100% route, after the Virtual Console version of the game was claimed to be faster. Differences between the versions include the amount of lag, which is reduced on the Virtual Console, and certain version exclusive glitches. The new route also includes a glitch fondly named by the community as Ass Chest. Up until now, this was a glitch which was rarely used in runs, most often being saved for glitch exhibitions. The new route, however, uses it to acquire the Spooky Mask, which allows the runner to skip the first two items in the mask trading quest.

While watching The Legend of Zelda runs, you might happen to catch the runners counting to themselves. While it’s a nice thought that they’re practicing their numerical skills, it’s actually a crucial part of the route for this game – Random Drops. 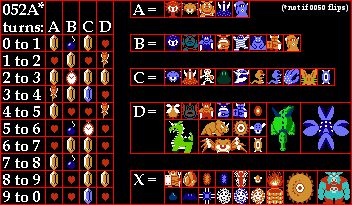 You see, after being defeated, each enemy has a chance to drop an item. These items are 5 rupees, a Bomb, a Heart, a Fairy or a Clock. Each enemy is part of a group, A, B, C, D or X. The counter begins at 0, and increases by 1 for each enemy killed (except for enemies spawned by other enemies, such as Vols splitting into Gels, or Vires splitting into Keese). The chances of each item dropping can be seen in the table to the left. Group A enemies have a 31% chance of dropping an item, Group B – 41%, Group C – 59% and Group D – 41%. Enemies from the X Group will not drop items.

This is only part of the reason runners practice their quick maths on stream though. The above method is also useful for determining their consecutive kill counter, which results in Forced Drops.

In addition to this, the 16th kill will drop a Fairy, regardless of the method. However the Fairy will not drop if the enemy is from the X Group.

Also important to note is that forcing a bomb drop will not reset the counter, however forcing a fairy drop will cause the counter to reset. This means that, upon killing the 17th enemy, the player will have to kill a further 10 enemies without being hit before they collect a bomb drop. 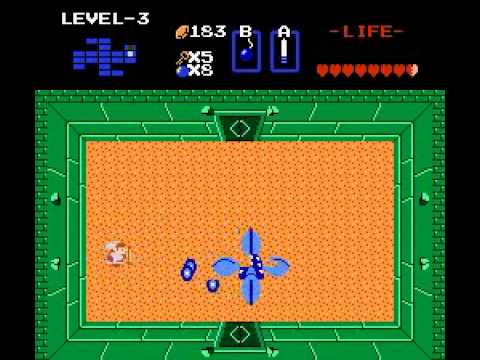 Bosses also count towards these totals. In particular, Manhandla, who moves around the screen in this game, can cause an instant forced bomb drop. By dropping a bomb over Manhandla’s path, each frame in which the explosion hits the boss will add one to the consecutive kill counter. If Manhandla passes over the explosion for 11 frames, this counts as the 10 consecutive hits, plus the 11th needed to spawn the bomb drop.

Both bomb and rupee drops are important in the current any% route (complete the game as quickly as possible). As there’s no known way of entering the final dungeon, Level 9, without collecting all pieces of the Triforce, this route must complete every dungeon.

Rupees are required to purchase several items throughout the run. The first is the Blue Candle, which is required to enter Level 8. This costs 60 rupees. With a secret cave containing 30 rupees hidden nearby, the runner must collect 30 rupees between starting the run and this point, which is around 9 minutes into the 30 minute run.

The other required purchases are Bait, required to pass the Goriya in Level 7, and Arrows, which also cost an additional rupee to fire. Together, these cost 140 Rupees, which must be collected through Random and Forced Item Drops.

Bombs are also necessary to take the quickest route through several dungeons. 7 are required for Level 7, and at least 1 for Level 6.

Fairy drops are not required at any point, however the Beam Sword, which Link wields when at full health, is very useful for traversing through tricky rooms, especially in Level 6, so the runner may decide to try for a Random or Forced Drop to return to full health.

Fear not everyone, this week I’ve managed to interview someone who actually has hands on experience in the speedrunning community. Zant is a streamer and Breath of the Wild runner, and I had a chat with him about his experience in the Zelda community. 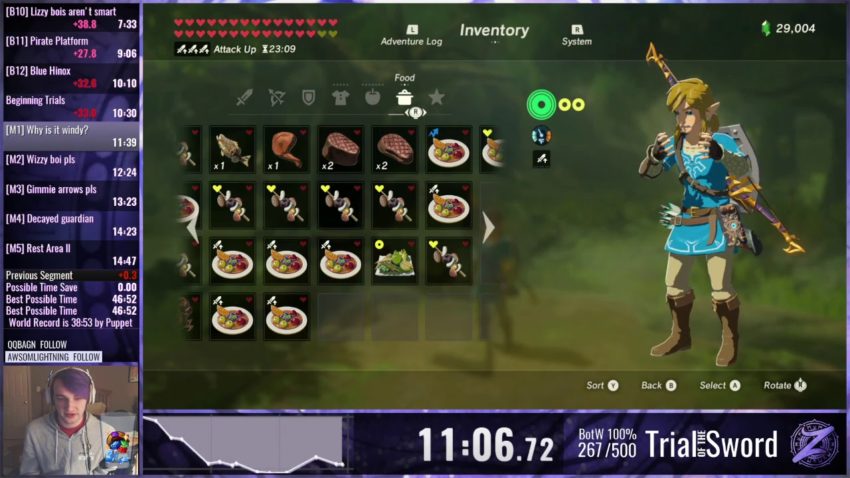 EC: Tell us a bit about yourself.

Zant: Hi, my name is Zant as people call me online.  I’m a speedrunner of Breath of the Wild, and a senior game design student, mostly focusing on 3D Art.  I’ve run Super Monkey Ball 2 in the past, and that’s about all the speedrunning I’ve done aside from Breath of the Wild.

EC: You’re currently running Breath of the Wild – All Shrines, which is an 8 hour run. What motivates you to carry on during the run if you’re, say, a few minutes behind?

Zant: So All Shrines is a very long speedrun, and due to this, it requires a ton of dedication and time.  I’ve spent countless hours routing out this run, trying to figure out what changes I could make to what I do in the run to save time, and figure out how a bunch of different variables work together to form the fastest run.  My motivation comes from the fact that I simply enjoy this game and love doing runs of it, even if the run goes bad. With All Shrines being a long run, being a few minutes behind after say the 5-6 hour mark can be very frustrating and demotivating, but I try my best to push forward and continue.  It also helps that a lot of the difficult things that can potentially kill a run usually come in the first 1-4 hours, and that is both by design, and a happy coincidence. 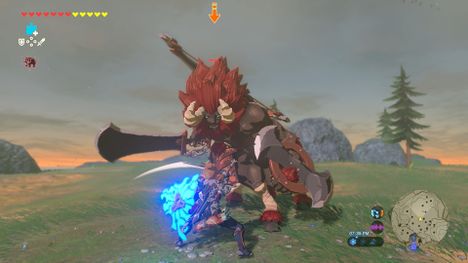 EC: You recently took part in a charity Breath of the Wild event, which featured the more common runs like any% and All Dungeons, but also lesser known runs like “All Dog Treasures” and “All Lynels”. How did you find out about the event, and what was it like playing in front of a different audience to your own stream?

Zant: The event was great! SpecsNStats, who is another great Breath of the Wild runner, asked me to join in and do an All Shrines run for the marathon, and I was super excited to do this.  Streaming to a different audience than what I’m used to is an interesting experience but it really does help broaden my horizons and get to meet some new people that I wouldn’t’ have otherwise gotten to talk to.

EC: The event also featured the legendary 100% run, would you ever consider trying it out?

Zant: On the thought of 100%, I want to do one eventually.  I recently set one of my subscriber incentives to be a 100% run from me if the incentive is met, as just a way for me to have an excuse to do one.  I see it as the little extra push to get me to actually do one, simply because it is a LOT of dedication to do a 100% run, not only with the time to complete the run itself, but the preparation as well.  Overall, my goal with Breath of the Wild is to experience every category in some capacity, and 100% is one that I will eventually touch on.

EC: What’s your favourite thing about the Zelda speedrunning community?

Zant: My favorite thing about the community has got to be how everyone comes together to help improve the overall time of these runs, instead of making it a competition.  I see so many communities that are so competitive to the point where huge arguments happen, and people don’t share strats or anything. For the wider Zelda speedrunning community, it seems that people in general care about pushing the game as far as they can with speedrunning, no matter who has the record.  It is a competition with the game and with ourselves, not against each other.

EC: If you could only run one category of one game for the rest of your life, what would it be?

Zant: I would have to say Breath of the Wild All Main Quests.  My favorite category of the game, covers the parts of the game that I think represent it best, and I have always seen it as my “comfort category”.

Zant can be found on his Twitter, and streams his runs and casual playthroughs on Twitch.

Breath of the Wild continues to be popular this week, especially the Great Plateau categories. Majora’s Mask also had a lot of Individual Level runs, which aren’t included in the list below.

That’s just about everything for this article. There’s a few events over the next fortnight I’d like to draw your attention to before I go.

Germany’s Speedrun Marathon (GSM) – 28th March – 1st April – Marathon event held in Germany to raise money for Save the Children. The event is featuring several Zelda games, such as Twilight Princess and the Oracle games, as well as other popular speedruns, like I Wanna Be The Boshy and Super Mario Odyssey.

Speedrunning Expo Spring 2018 – 28th March – 1st April – American marathon event which raises money for the Cystic Fibrosis Foundation. Features a Link to the Past Co-op Randomizer race, which promises to be quite the spectacle.

That’s all from me! Remember, if you have any questions or comments, feel free to comment below, or slide into my twitter DMs.

Euan Crombie is the host of Zelda Dungeon’s bi-weekly Zelda Speedrunning series, Zelda Runners. He can be found on Twitter and is the author of The Speedrunning Compendium. He comes in multiple colours and sizes.

Comments
Sorted Under: Breath of the Wild, Ocarina of Time, Original Content, Slider, The Legend of Zelda, The Wind Waker, Zelda Runners
Tagged With: No tags were found for this entry.