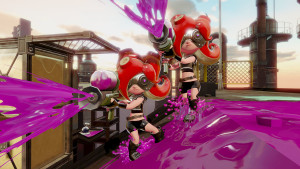 Nintendo fans may as well call this the Year of the Squid because its most anticipated game happens to be the third-person ink shooting break-out hit Splatoon. With less than a week before its international May 29th release, the hype is reaching its peak. In the wake of this excitement, GameXplain has sweetened the deal for Zelda fans by finding a classic Zelda enemy displayed in Invader style street-art on one of Splatoon’s maps. An old school Octorok makes an appearance alongside a classic Blooper from the Mario series.
Hit the jump to check them out!

The comparison between squid-like Bloopers and octopus-like Octoroks is really interesting, especially being that the easter eggs appear on opposite sides of the map. Are you excited for Splatoon’s release? Are you hoping to see more Mario or Zelda easter eggs? Let us know in the comments!