The Importance of One-Offs in Zelda

One-Off: noun. Something occurring, done, or made only once.

For being relatively common, one-offs are rarely given any spotlight in the Zelda franchise. This is unfair; the importance of singular moments with different mechanics or a different tone from the rest of the game cannot be understated. From the Romani Ranch side quest in Majora’s Mask to The Sand Sea in Skyward Sword, I’m going to take a look at some of my favorite unique moments from the history of The Legend of Zelda and briefly show their importance in the game as a whole.

Hit the jump to join me!

The very first one-off that I identified is a quickie from my favorite Zelda game, A Link to the Past. Early on in the game, players have to make the trek up Death Mountain in an attempt to find the Tower of Hera. Upon finding the path ahead to be nothing but stone, we have no option other than step on a glowing, blue tile. Enter the dark world, but with one key difference from what we see in act two of the game. Link is a Bunny. As a bunny, we can’t use any of our gear; none of the buttons on the controller work except for the D-pad. While walking around, we run into a bizarre Tyrannosaurus-looking creature kicking around a… Pink pillow? A… Mushroom? I honestly have no idea. Regardless, both your predicament and the state of the Dark World’s other denizens are later explained in the lore as one of the effects of the dark world: turning people into a representation of their true self. Though players got to teleport back to the dark world in just an hour or so, and for a more extended visit at that, it was never in this particular manner again. This section was not exactly entertaining, but it certainly threw me off-kilter and got me excited to see more of the strange sights in the Dark World. 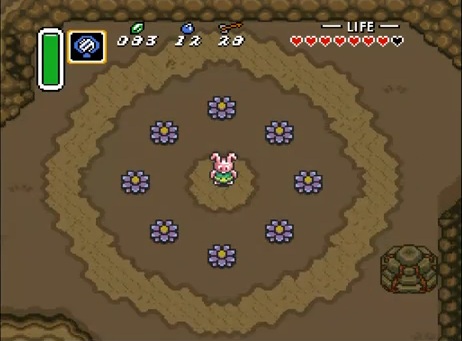 From here, I’m going to jump ahead to an even weirder moment from an accordingly weirder game: the Romani Ranch Alien Defense Force side quest from Majora’s Mask. For those unfamiliar, players are, up to a certain point in the game, unable to access the Ranch until day three. Once there, we are greeted with a depressed Cremia and an almost comatose Romani. With access to the Powder Keg, however, comes access to Romani Ranch prior to the third day. This opens up a quest to prevent the tragedy that befell the ranch, and it’s not at all what first-time players expect. On the night of Day 2, players have to ride around on Epona and shoot down aliens. So that’s cool. 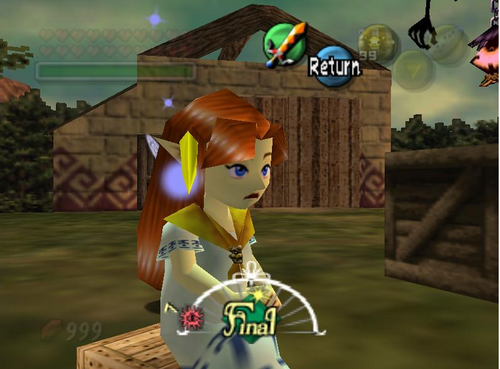 In all seriousness, this quest was one of the highlights of Majora’s Mask for me. It doesn’t change any of the game’s basic mechanics, but uses them in such an eccentric setting that I can’t help but smile all the way through. Zelda games have always had a penchant for the strange, but this is a different brand entirely; whereas characters like Tingle fit into the world of Zelda and, even beyond that, help create that world, Aliens are nonsensical even in the preexisting context of The Legend of Zelda. These off-the-wall moments go a long way towards giving players a break from the main quest, which is particularly important in Majora’s Mask, a game that has a relatively heavy storyline and tone. Sidequests like this help prevent player fatigue; while I frequently take a couple of weeks off from an implacable, long title like Metal Gear Solid V or a JRPG, the more preposterous moments sprinkled throughout Majora’s Mask mean that no such concessions are necessary.

The next 3D installment in the franchise, The Wind Waker, gives us a number of interesting and unique moments. One that takes place early in the game is Link’s first trip to the Forsaken Fortress. Here, players are totally helpless: imprisoned in an enemy stronghold with nothing but the clothes on their back and Link’s guileless charms to save their sister and evade their foes.

This is hardly the first or last occasion on which stealth made an appearance in the Zelda franchise, as Ocarina of Time saw Link break out of a Gerudo base and Skyward Sword saw Link use a similarly stripped-town toolset to evade Bokoblin guards, but The Wind Waker really goes all the way. This section isn’t exactly brief; on a first play through, players may spend half an hour roaming around in an attempt to find your way to the top of the place, and it feels fully featured, at least as much as any action-adventure game is supposed to in regards to a stealth section. This segment also does a great job at introducing Link’s ability to steal weapons from his foes; climbing to the top of a watchtower, “procuring” a Bokoblin’s club, and promptly beating them to death with their own weapon is incredibly satisfying, especially after being forced to hide from your opponents for so long. Speaking of payoff, I would be in remiss if I didn’t mention players’ return visit to the Forsaken Fortress later on in the game, Master Sword in hand. Whereas your first, subterfuge-filled trip ends with getting flung from the top of the enemy stronghold, your mission ending in abject failure, the second visit culminates in players getting to bring some pain onto the Helmaroc King in the form of a Skull Hammer to its avian face. 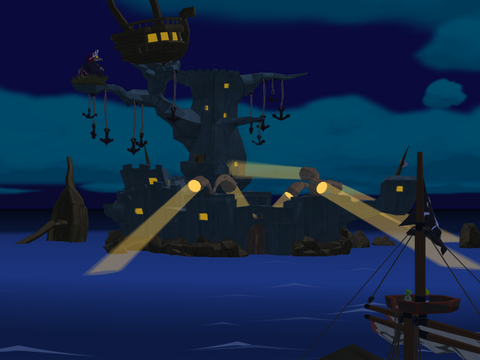 Though Link’s Forsaken Fortress adventure in The Wind Waker is a great example of a one-off, it doesn’t even hold a candle to my personal favorite: the Lanayru Sand Sea from Skyward Sword. In keeping with the theme of act two of the game, Link’s second visit to the Lanayru Desert has us blazing a trail in a new, unknown region in search of a dungeon. However, where the new sections of Eldin Volcano and, to a lesser extent, Faron Woods are very similar to the first, the Lanayru Desert’s second section builds off of the Timeshift Stone mechanic introduced a few hours earlier to inject the area with a whole new atmospherere. Perhaps my most exhilarating moment in Skyward Sword as a whole was when I first began turning sand into water as I took the boat for a joyride. This moment is especially effective because it comes after hours of dungeon-delving and walking. Going from the stifling heat of Lanayru Desert to this ultimately unique ocean, the wind whipping Link’s hat around behind him is incredible.

However, the sea itself is only part of it; the island destinations are half of the fun! In order to gain entrance to our next dungeon, we first have to visit Skipper’s Retreat. There, we get to use our shiny new clawshots to latch onto Peahats. This level makes great use of vertical space; whereas before we had mainly been using our clawshots to reach previously inaccessible ledges or go from wall-to-wall, here we get to scale what is effectively a mountain range. After that, we get to visit another island, called The Shipyard, where we get yet another unique gameplay mechanic: a mine cart section straight out of the second Indiana Jones film. Players have to twist the Wii remote to shift their weight and choose the section of track that will not end in a horrifying, sandy death. This section ends far too soon, but players can return and play through it as a mini game if they would like later on. After this, it is only a short ride away to the Sandship (which is perhaps my favorite dungeon in Skyward Sword, but that’s a ramble for another time). 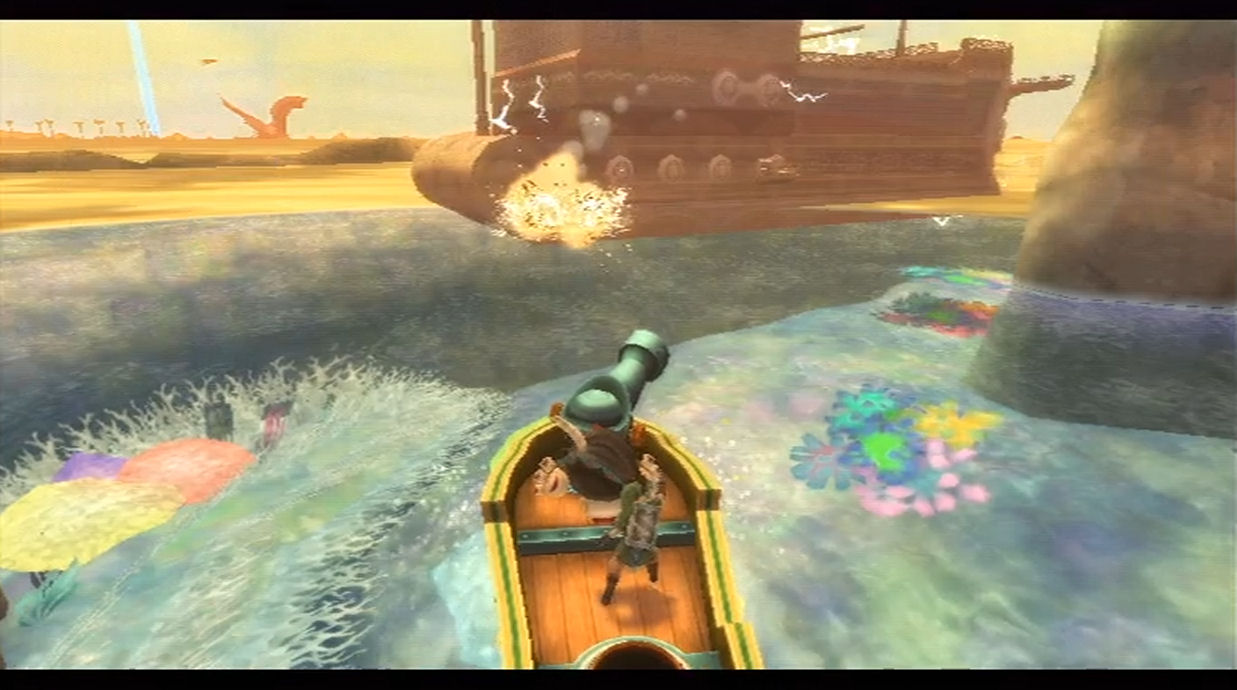 All of these sections are special, all are important to the game as a whole, and all are different from each other in one way or another. The main trend that I noticed in writing this article is that these unique sections of the games got more in-depth and meaty as time went on. It was crucial that this change happen, as the main quests also ballooned in size. A Link to the Past, a fifteen or twenty hour game, can get away with using a quick change of pace for story-based set-up and intrigue, but Skyward Sword, a forty-five hour game, needs to offer players a more substantial lull in the pacing.

This lull is tied the closest to the important factor that the Sand Sea is an exemplar of: simply being different; it goes above and beyond in offering a new experience to the player. After traipsing about in a rather depressing desert for an hour or two, hopping aboard the Zelda equivalent of a speed boat is the last thing one would expect. For that matter, so is turning into a bunny after going mountain climbing, or having to play as Solid Link for a while, or shooting down Aliens in the middle of Termina. I love these sections because they give the development team a chance to flex their muscles in a manner outside of that which is normally found in a Legend of Zelda title, and getting to sample the fruits of their labors is a joy unlike any other. Obviously, I love Zelda for its signature menu items as well, but sometimes trying the daily special offers a less-honed but, ultimately, more invigorating experience.

Those are my thoughts on this multitude of Zelda moments, but what do you think? Obviously, I couldn’t put every single one-off into this article, so if I made any particularly egregious oversights I’d love to hear about them. Leave your thoughts in the comments!

Comments
Sorted Under: A Link to the Past, Editorials, Majora's Mask, Site Updates, Skyward Sword
Tagged With: editorials