The Gerudo: Mechanics of Life 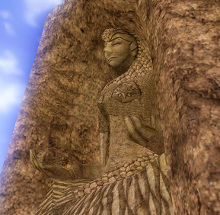 The Gerudo are a race of women that have been known to live in the desert portion of Hyrule. The Gerudo appear as tall, lean and muscular women with red hair who are traditionally portrayed as thieves.  In Ocarina of Time, they have an apparent ranking system: among them are guards, fighters, and a leader. In Majora’s Mask, a different tribe of Gerudo are portrayed with a similar ranking system.  Commonly, the Gerudo women go to Hyrule Castle Town to find mates but otherwise do not leave the desert. Only one man is born among the Gerudo every one hundred years; in Ocarina of Time, this man is Ganondorf.

Detailed analysis of the Gerudo race requires extensive observation of their genetics. A brief overview of the terminology that will be used to discuss their genetics follows.  An allele is one of two contributors to a single gene. Usually, one is contributed by the female parent and the other by the male. Together, two alleles form a physical characteristic (also known as a phenotype).  When a gene contains two matching alleles, it is homozygous. Heterozygous gene contains two different alleles. When a gene is heterozygous, one allele will be dominant over the other and will be the allele that is expressed (that characteristic that we can see). The other allele is recessive to the dominant one and is not visible unless there is some genetic defect. Homozygous genes can be either completely dominant or completely recessive.  In human reproduction, 23 allele containing chromosomes are contributed from each parent to produce a child/offspring with 46 chromosomes. The child’s phenotype is determined by the dominant and recessive genes contributed by the parents. Lethal genes are best described as having an allele that causes death. If there is no matching allele for these genes, they become dominant and cause death.

All races are intended to procreate and continue on with existence. For the Gerudo, however, this is difficult. In order for the Gerudo race to continue to exist, Gerudo genes must remain dominant during the 100 year time period between the birth of Gerudo males. Since Gerudo reproduce by pairing with Hylian males, their offspring are heterozygous, with dominant Gerudo genes. If these offspring then mate with the dominant male Gerudo, there is a 50/50 chance of the offspring being homozygous dominant or heterozygous with dominant Gerudo genes. Using this process, the Gerudo could continue to produce offspring that was not homozygous recessive, and thus sustain their race for the necessary period of 100 years.

If the Gerudo lifespan exceeds the Hylian/Human lifespan of 120 years, the need for the dominant male is less important, but still required to create any offspring that is homozygous dominant. If the lifespan is shorter (about 80-90 years), there is a need for other males, specifically Hylians from Castle Town Market, to help sustain the race until the Gerudo male is born and able to reproduce. This is how the race survived, and was intended to survive, before Ganondorf arrived and entered the sacred realm. As long as the dominant Gerudo genes were passed from the male to many children during the time he produced viable cells, then there would be enough homozygous dominant offspring to filter out and genetically mask the number of recessive alleles (50% heterozygous).

Only females are produced from the mating process described above. It is possible that Gerudo women’s egg cells have a chemical messenger signal that detects whether the male cell carries the Y allele or the X allele due to the distinct difference in genetic content between the female and male sex chromosomes. Y chromosomes are significantly smaller than X chromosomes. Therefore, the female cells may repel the Y containing cells due to it being physically lighter, allowing Gerudo eggs to be fertilized only with X-containing cells and producing only females as a result.

The most pressing issue in this theory, then, is how the male is produced. The purpose of the male in the environment is to maintain some level of gene diversity so that the race can survive. The inducer (something that causes a change in the genetic process) for the production of a Gerudo male is simply the weakening of the gene pool over the 100 years. The mechanism for the production of the male Gerudo starts with the mating of a homozygous dominant Gerudo female and a Hylian male. The weakness of the gene pool and the genetic code the homozygous dominant female receives upon her conception could cause the chemical messenger that kept the Y chromosome away from the female egg to not be produced within the body and therefore allow a Y containing cell to fertilize an egg.

An argument against this theory is that 50% of the females produced would be heterozygous, and so only one of them would have to find a Hylian male to mate with. Due to the ranking system of the Gerudo, it is possible that not all of the Gerudo are allowed to leave the desert. As a result, only a few of the Gerudo may be allowed to mate. This social factor likely plays a larger role in the production of the male than the biological requirement. If only one female is socially allowed to reproduce with a Hylian male, this would greatly reduce the amount of possibility for the conception of a male. Due to the extremely regulatory nature of the 100-year gap, it is most likely that this social factor plays a major role in this portion of the race’ survival. But this production of the Gerudo male would revitalize the population and cause the gene pool to become a strong dominant one once again. The heterozygous females will always produce males. The offspring from these dominant males will be homozygous dominant females. These females, when they reproduce with the Hylian males, will produce only female offspring, of which will all be heterozygous. Those females will then mate with Hylian males and produce only males. Thus, the race could survive through sexual reproduction and posses the traits that are known to be true of the Gerudo. Social and environmental factors would thus affect the biological processes of an intelligent race like the Gerudo.

It is also possible that the Gerudo reproduce asexually due to their abundance. Meiosis, the process of creating cells that undergo reproduction to yield offspring, results in two cells in the female.  One of the cells dies out and the other produces the clone/offspring.  In the case of the Gerudo, is possible both products of the cell division would grow into an offspring, but that would mean that every time the females reproduced, they would have twins. This theory would then make the Gerudo a haploid organism (that is, they would only have one copy of their chromosomes/genes).

The production of a male would then be caused through the same mechanism as described above for sexual reproduction. But the actual inducer would be the fact that the gene pool required additional diversity and the Gerudo women found Hylian males to mate with. This would have to happen twice, over two generations, for the Gerudo female be heterozygous. However, this would imply that the lifespan of the Gerudo is shorter than the 80-90 years to keep up with the 100 year timeline of the production of the male Gerudo. The theory of asexual reproduction would also explain the fact that all Gerudo women appear identical. That said, asexual reproduction is unlikely because any race that lives in a harsh environment, such as the desert, requires as much genetic diversity as possible to survive in the environment. A small diversity or mutation could cause the death of a large number of the population if there were any shift in the environment, which is frequent in the desert.

Due to the nature of the two theories, either one is possible; however, sexual reproduction is more likely. 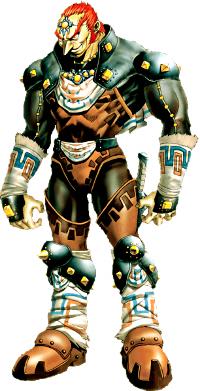 In the long term, it appears that the Gerudo would continue to live well and the race would carry on as intended if not for a single pivotal event. Prior to the events in Ocarina of Time, Ganondorf is born as the single Gerudo male and becomes the king of evil. Once he is defeated by the hero of time, the Gerudo race is left without a Gerudo male. From a biological standpoint, at first this seems rather unimportant as the females are still able to reproduce with Hylian males to produce Gerudo females. The process would continue the same as described above. Therefore, biologically the system would continue.

The social factors may be the introduction of the problem. Only one female is allowed to go to Castle Town to find a male to mate with every hundred years and one had done so to create Ganondorf. But because Ganondorf did not conceive children (that are known of) the gene pool would become weaker much faster than in previous cycles. In addition, because of a lack of completely dominant offspring, homozygous dominant females genetically programmed to not produce the chemical messenger to block the Y chromosome containing cells would be created before the 100 year gap was complete. As a result, the time span where these females are fertile and the inducer is in place could be missed and the Gerudo many not be able to produce another. If this social factor was truly strong enough to inhibit the Gerudo from creating another male to replace Ganondorf, it is possible for them to ‘skip’ a male generation. This skip would weaken the gene pool even more, lessening genetic diversity and making the Gerudo more vulnerable to their environment.

After the events of Ocarina of Time, the Gerudo fade from existence. A change in the environment that adversely affected the weakened race could have caused this disappearence. The most recent map of Hyrule indicated that there is a physical spilt between the desert and the main portions of Hyrule, including Castle Town, hinting at such environmental changes. In spite of the likely environmental changes, the Gerudo may have survived if some among their race simply relocated to a more suitable location.

A major flaw in this theory is the fact that it is very unlikely that an individual Gerudo could know when there was a weakening the in gene pool. Like all biological theories, this one is not perfect. Only genetic testing of the Gerudo or canon information from Nintendo could “prove” any of this speculation.  The former is obviously impossible and the latter would require information about an aspect of this fictional universe that Nintendo rarely addresses.

In summary, the Gerudo are able to produce only females through the use of specific alleles and chemical messengers for nearly 100 years at a time. The weakening of the gene pool during this time causes the reduction of the inhibiting chemical messenger that allows only females to be produced. The pressure of social factors causes a strong Gerudo woman (containing dominant genes) to seek a Hylian mate to produce a male Gerudo. This male then allows for the strengthening of the gene pool once again and the cycle returns to production of only females. The gene pool was weakened when Ganondorf was banished to the sacred realm. A subsequent environmental catastrophe could have caused the extinction of the Gerudo race.

There are numerous questions to be asked about Gerudo biology, but we are presented with few answers. While theories can only ever be speculation, understanding the possible biology of this race may lead to a better understanding of their social structure and their place in Hylian mythology.