Oracle Of Seasons And Oracle Of Ages Both Turn 14

Happy birthday to the Oracle of Ages and Oracle of Seasons games! They turned 14 today and were originally released in Japan on February 27, 2001…

Oracle of Ages and Oracle of Seasons were unique entries in the Zelda series for many reasons. The feature that sticks out to me the most about the two games, however, is the use of the three special animal companions.

You have Moosh, a flying bear who can ground-pound enemies; Ricky, a hopping and boxing Kangaroo; and Dimitri, a surprisingly friendly Dodongo who can swim. In a single playthrough, you’ll end up meeting all three animal companions, but depending on how you play the game you’ll get one of them at your beck and call through use of a flute…

A Princess and her Knight, or more than just that? Looking at Zelda/Link

Stories of valiant knights, princes and other heroes who fight for their beloved ladies are some of the oldest and most beloved stories in human history. Perhaps even THE oldest, depending on your interpretation of the Epic of Gilgamesh. So it was to be expected that a concept as basic as fighting for those you care about eventually ended up in The Legend of Zelda, or at least have fans ascribe it to individual games. But is there any truth…

Artist and Zelda Subreddit Sensation Discusses Her Zelda U Artwork

If you’re a user or lurker of Reddit and a Zelda fan, you might have noticed one thread has recently set the Zelda Subreddit on fire, gaining more than 3,000 upvotes in a single day. The creator of that thread, Jessica Smith, is an artist whose recent Zelda-inspired artwork you might have seen online . . .

The Oracle series marks a very unique twist in the Zelda kingdom. While releasing two games that connect in some fashion isn’t new at Nintendo (the entire Pokémon series comes to mind), it was entirely new for the Zelda series. It also didn’t come out of Nintendo directly, as these games were crafted by Capcom.

Another odd twist is that there was supposed to be three games, but due to various reasons they cut it down to two with a special ending that could only be had by owning and completing both games. Due to the nature of these games getting released at the same time and having a lot of similarities, along with a combined overall ending, I have decided to group them together in this special case of figuring out why someone may prefer these titles over all of the rest in the series.

Daily Debate: What Is Your Zelda-Related New Year’s Resolution?

Gossip Stone: Are Cuccos Interesting, or Pointless Additions to the Series?

“Don’t be such a Cucco!” You’d probably be offended to be accused of acting like a Cucco, wouldn’t you? But perhaps you shouldn’t be. Cucco are incredibly strong creatures that are loyal and protect their own from harm; these are endearing qualities, so why the negative connotation on the name? Well, aside from the Cucco being the Zelda form of a chicken, and the phrase “Don’t be such a chicken!” being an insult in reality, Cucco can be seen as…

Gossip Stone: Who Is Your Favorite Dragon Boss in the Zelda series?

When it comes to stories set in a medieval or pseudo-medieval setting, soon or later you’ll run into dragons. Either in the flesh or just referenced, there is something primordial, something alluring to large serpentine monsters. Many cultures who have had contact of some kind with scaled creatures from snakes to crocodiles have eventually developed a large and mighty variant of it: from the Chinese Dong Fang Qing Long (The Azure Dragon of the East), the Iranian Zahhak (known as…

This week was a good week for the The Legend of Zelda series in terms of eShop sales. The top three spaces belonged to the Zelda franchise while another game slipped its way into the mix… 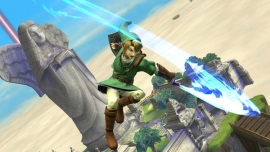 Last week, Nintendo started up a “Super Smashing Sale” in celebration of the impending release of

Super Smash Bros. for Nintendo 3DS (it’s out right now in Japan, you know. Timezones and stuff). Each week until the North American launch of the game, select titles featuring the next Smash‘s characters will go on sale on the Nintendo eShop, allowing us gamers to experience the classic games that made these characters worthy of joining the Smash Bros. fight. The first week of the sale focused mainly on Mario characters, but this week? This week it’s all about The Legend of Zelda…

In 2011, Nintendo introduced the highly controversial official timeline which would map out the position of each Zelda game in a linear fash... read more

After two long years of waiting, the second trailer for the sequel to The Legend of Zelda: Breath of the Wild is finally out! Well over ... read more

The end of this year is rapidly approaching, which means that it's time for my favorite annual tradition here at Zelda Dungeon: Best. Zelda.... read more