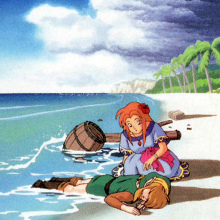 You could make the argument that many follow the same framework, with a princess being captured at some point, a villain wreaking havoc, and a world to save. Medallions or other relics might play a role in unlocking something somewhere.

However, you could also take a look first at the original, 8-bit Legend of Zelda, where most of the character interaction consisted of talking to old men who were disconnected from the rest of the world, and then at Majora’s Mask, packed to the brim with individual characters who have individual experiences, most of which help explain the overarching plot in some way. The games have advanced little in terms of character and plot development from there, but they haven’t had to. That said, Majora’s Mask was building on the already-strong characters of Ocarina of Time, which on turn must have built on something else.

There had to be a lynchpin, something which laid the foundation for storytelling in the series at large.

That’s where the heldheld title Link’s Awakening comes in. It imbued Zelda stories with more personal storytelling, focused on characters’ individual interactions, gave the stories a plot with a bit more meat to it, and defined the style which would carry through to the present. A Link to the Past helped lay the groundwork, but Link’s Awakening molded it into something meaningful by capitalizing not on the collective story of the game’s world, but on the individual story of its hero and its residents.

If there is such a thing as the “collective experience,” which I will here define as the experience of more than one individual human being, then it is probably impossible to know what it feels like. We are proud of our country or sad when a tragedy affects a nation as a whole, but we experience this on an individual level, gauging the repercussions of larger events by how they affect us or people we love. No mind exists that can experience the feelings and stories of a crowd. 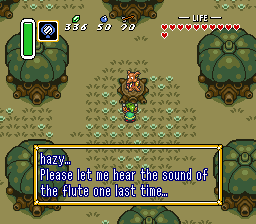 We can read stories about great battles, warring nations on the brink, but it is the personal stories that affect us. Even in the ancient world, nature-altering events were heralded by the gods’ personal dramas. Naturally, as we grow, we become concerned with community or humanity at large, but we can only ever experience it as individuals — and if we must reach out to the larger world and adopt them as family, it is because we empathize with them as we would empathize with those closest to us.

Zelda games have always been about Link. As most Zelda players know, Link is a “link” between the player and the world of Hyrule, and we are supposed to feel like part of his adventures. At first, the stories of this hero and his quest were pretty simplistic. A Link to the Past deepened the mythology by raising the stakes, providing a little history, and altering the motivations somewhat, but these stories are still driven by larger-than-life events, too large to feel intimate or personal.

Though it’s worth acknowledging a moment of maturity for the Zelda series in A Link to the Past. If you’ve played to about the midway point of the game, there’s no question that you remember Flute Boy. The Dark World is a hellish, unpleasant place, and that’s established fairly early, but there are no personal stories that we can relate to. Inhabitants of the Dark World have a few lines to say and don’t leave much behind. As with the old men in caves in the original Legend of Zelda, many of them are props that exist to explain the world and not characters.

Flute Boy is different. His story is established while we’re in the Light World: He’s a curious child who went to Death Mountain and was never seen again. He has a family, so other characters have an investment in his fate. Already, this elevates him above the level of a common NPC; he has established relationships. After Link finds Flute Boy in the Dark World, then fetches his flute in the Light World, Flute Boy asks to hear it one last time before turning into a tree. As requested, you see his father, who entrusts it to you.

This moment may have been revolutionary for the series as a whole, because it populated Hyrule with real characters, imbued them with relationships, and integrated their stories into your personal experience. Since the Flute is such an important item which you will often use, you’ll be reminded repeatedly of Flute Boy’s story.

Again, A Link to the Past, perhaps by virtue of being the first Zelda game to flesh out the history of its world, also fleshed out characters better than its predecessors. But it wasn’t until Link’s Awakening that personal stories came into full fruition and became an integral part of the series. In that respect, Link’s Awakening changed the rules.

Link’s Awakening is filled with such stories, most notably that of Marin, who may be the most important non-player character in Zelda history for all she did to change the subsequent presentation of NPCs. Link’s Awakening starts and ends with Marin. After Link is shipwrecked on Koholint, she finds him, wakes him up, and returns his shield. Several times throughout the quest, Link will return to Marin and her village for vital plot developments and item acquisition. What’s best about this is that, perhaps in part due to Link’s Awakening’s story, Marin and her father, Tarin, feel like living, breathing residents of Koholint rather than simply NPCs. They don’t just serve as motivators because the plot requires them to; rather, the plot develops as it does, for the world at large, because of their actions. They don’t just serve as specific checkpoints in time for Link’s quest, either; they remain relevant throughout.

The culmination of this character development is the brief period Link spends with Marin before going to Yarna desert. Marin and Link bond through a series of events, some of which are entirely optional. They’re well-scripted, so that they give you a sense of a developing friendship, even romance, between these two characters. The moments play to the game’s strengths, integrating its unique brand of humor and world-building, and Marin even interacts with a formerly inconsequential NPC. Marin allows for some permanence in the world of Koholint, allowing you to experience the game as a character study.

Their stories help drive the larger plot while still feeling like individual experiences, which makes them extremely relevant and extremely personal, all at once. This means the stories start from the right point — as personal experiences — and gradually evolve to help us empathize with and care about the world at large.

Again, A Link to the Past touched on this. We met Zelda first, became familiarized with the Light World first, and learned what was at stake at the very beginning of the game. From there, the story expands outward. However, Link still felt incidental to Hyrule, an essential part of its story but not a driving force in its development.

Link’s Awakening expands both inward and outward, enriching character relationships as the scope of the plot becomes clearer. At first, we’re trying to unravel the mystery of how to get Link out of difficult situations, by getting his shield, then his sword. Very quickly, the mystery becomes the question of what the island itself is. It is, of course, the Wind Fish’s dream. Once that mystery is solved, it’s Link’s job to awaken the Wind Fish, in turn awakening himself and turning the island into nothing but a memory.

Because the personal stories have continued to develop alongside the story of the world itself, none of the scope of the story is lost. The story still feels huge and ambitious. Perhaps it being so different was liberating, but a similar approach was applied to Ocarina of Time, with the nature of every section of the overworld becoming something of an unraveling mystery. In other words, the personal stories have come to enhance the lore, and Link’s Awakening can be thanked for that. 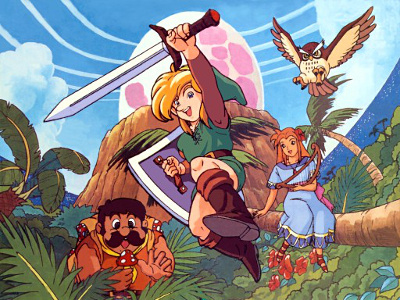