Posted on December 09 2012 by Mases Hagopian 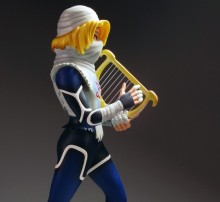 In this weeks Mas’ Zelda Collection video, we take a look at the Sheik First 4 Figures Statue, released back in Quarter 3 of 2007. Initially retailing for $109.99, this was the 4th statue in the First 4 Figures series of Zelda statues. The statue had a limited run of 2500 statues, but has long since sold out, making it yet another sought out Zelda statue.

While it has become a rare statue, it is nowhere near as expensive as the Fierce Deity Link Statue, the Skull Kid Statue, or the Ocarina of Time Link Statue. Every so often this statue will pop up on auction websites such as eBay, usually selling somewhere in the range of $250-$350. That is still about 3x the amount it initially sold for, but not nearly the 8x the amount that some of the other statues have sold for. With more and more collectors locking these statues up, they are becoming harder to get your hands on, which will inevitably cause the price to rise even further. In any case, you can go ahead and check out the collection video after the jump. Be sure to subscribe to our YouTube Channel, where you can catch collection videos every Sunday immediately when they are uploaded.