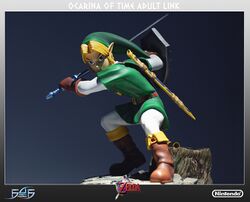 First 4 Figures is hugely proud to present the one that the fans have all been waiting for, Adult Link from the Ocarina of Time game! His pose shows him winding up for his signature spin attack.

Comes packed in a foam interior full colored box with a card of authenticity. Highly limited at only 2,500 pieces available worldwide. Looks fantastic when displayed with the other statues in the range.