Link’s Many Girlfriends in Ocarina of Time 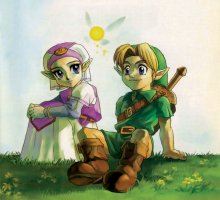 Having recently completed the original quest in The Legend of Zelda Ocarina of Time 3D, I got to thinking about Link and his many prospective girlfriends in that game. Link really is a lady’s man in this game and ends up somewhat betrothed to two girls (Ruto and Malon). He has one wishing she would have taken a chance with him when she had it (Nabooru). Link also fights for the attention of one girl (Saria) against a possible nemesis (Mido). Now, considering the many female characters in the game, I don’t think we should indulge in them all, but just the ones that seem the most likely. So, we should leave characters like the Cucoo Lady out of this discussion.

Out of Saria, Malon, Zelda, Ruto, and Nabooru who would have been the best girl for Link? Who would Link have had the best chance at, but might not have been the best for him? Do you think there could have been in a love triangle between Link, Zelda and Mido? Do you find Sheik more feminine on the 3DS? What about Nabooru regretting not pursuing Link when she had the chance? What do you think she meant exactly by “give you something good?” Jump inside to find out my thoughts!

So, who do I think Link most likely ended up with after the events of Ocarina of Time, probably Malon. However, I’m not 100% sold on that idea. I could see Link and Zelda forming a relationship, but if the end of the game implies that Young Link is meeting Zelda again for the first time, she wouldn’t have any knowledge of the quest to fight Ganondorf, other than her dream and whatever Link tells her. It seems that Ruto came to love Link in an odd, perhaps obsessive, way due to her waiting on him those seven years. Though, little is known of Zora culture, so it could be that she thought of him as her betrothed and this led her to pine after him in the years during his absence. Anyhow, I think that a relationship between Ruto and Link would probably be the most interesting. As for what adult girl was the hottest in my opinion, I would say that Ruto and Nabooru tie, with Zelda in her Sheik form coming in a close third (for the 3DS versions of these characters of course).