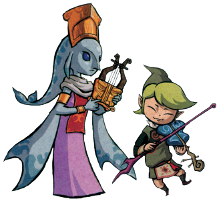 I already wrote in my last Favorite Zelda Moments editorial — where I discussed the flooded Hyrule — about how I feel The Wind Waker managed better epic presentation and cooler storytelling than most other Zelda games, including Twilight Princess, which is usually the game you’d see praised for cinematic presentation. This week I’d like to discuss a few more related moments: The meetings with the deceased Sages of Hyrule.

Now, The Wind Waker is usually considered a pretty cartoony game. But just as recently as the last mailbag, I claimed it had the saddest ending of any Zelda game, and even throughout the game there are plenty of melancholy moments. In this way The Wind Waker is a great example of having an artstyle that doesn’t tie the game down thematically; you don’t need to have fully-formed, non-deformed-looking bodies to display some serious emotion! At any rate, these dead Sages and the moments surrounding them are at the point in the game where things get a fair bit dark… and epic.

Laruto and Fado were presumably murdered by followers of Ganondorf, and serve as two of the game’s few direct links to the old flooded world of Hyrule. They serve as a kind of continuation of the Sages from Ocarina of Time, as well as help to depict and even explain the fate of that game’s races. Though, of course, perhaps these raise more questions as well: Why is a Zora the Earth Sage, and where was the Earth Sage in Ocarina of Time? And why, exactly, did the Zora decide to evolve into birds instead of, I dunno, I’m going to go out on a limb here and say FISH? But, regardless of the unclear bits, these serve as vital connections to Hyrule and explanations of the aftermath of Ocarina of Time, and these are things that The Wind Waker’s latter half have plenty of, which helps to define the game’s tone and its themes from then on out. These are themes of worlds past, of a legend suddenly become all too real, and of a duty — that of the Sages — that must be completed for the good of the world even in death. Heavy… and epic!

Another great aspect to these moments is simply their individual tones and the soundtrack of them. Upon first visiting the entrances to the Earth and Wind Temples, the ghosts of the Sages greet you and give you a hint as to who their successor might be. These moments are really great. Seeing Laruto’s spirit for the first time to her sad and grim theme really set the tone of her character, of a tragic death of someone simply doing her duty. It’s part of the reason I think facing her probable murderer, the boss of the Earth Temple, was so underwhelming. Fado seems a little more content with his fate given his expression and his theme, but the tune is by no means overly cheerful, and in fact — while it feels culturally fitting for the forest children — it feels like a grim or dutiful take on the Kokiri Tribe. This is a Kokiri who isn’t playing like a child; he’s serious and doing his job. This goes along with what I wrote about my last favorite moment, in that The Wind Waker excellently continues themes and story points present in Ocarina of Time; this is a side of the Kokiri we never saw until now.

It’s also great that both these themes are in fact the same; they are two very different arrangements of the Legendary Hero theme that plays during the game’s introduction, where you hear the legend of Hyrule. So again, these moments are tied together with not only each other but Hyrule itself, and not just in stated story but in the design of their music. The music angle gets cooler, as both these characters and their successors play two tunes that correspond to each temple which in fact are two separate components of The Wind Waker’s Title Theme. So they connect to not only Hyrule but to The Wind Waker itself; it’s almost like Medli and Makar are the titular characters without actually being that. And finally, as I’ve written in the past, Medli’s awakening theme in particular — an arrangement of Dragon Roost Island — is another theme that plays during these moments that helps set the tone; it’s a song of her melancholy over a great duty and burden.

I’m sorry if this has turned more into a music review than anything else by this point, but I can’t avoid talking about these themes because its the soundtrack of the moments surrounding these two Sages that really defines them; The Wind Waker in general is great at combining music with gameplay and story to create truly amazing moments. These moments are loaded, filled with emotion. There’s so much going on here in terms of story and plot and emotion, that while they are not as grand and epic as the moments spent in flooded Hyrule itself, they are in many ways more personal, and have more impact. They deal with individual people, not just a grand legend of a kingdom, and even though the player has never met Laruto and Fado before this point, they still ought to get a sense of these people, of who they were, of their plight and of their duty. I love the moments surrounding the dead Sages and their successors; they’re some of the best moments of the series.

How about you? What did you think of these two moments? Did you like the story surrounding them, and did you think it was emotional and/or melancholy? Which did you like better, Laruto or Fado? Or perhaps you liked the meetings between them and their successors better? How about the music during these scenes? Tell me in the comments!