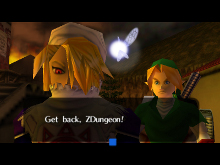 One of my favorite moments in Ocarina of Time was this sequence. When you visit Kakariko Village after completing the Water Temple, you’ll find the village on fire and Sheik standing by the well. He warns Link to get back, before a creepy immaterial force comes out of the well and subdues both Link and Sheik. After which, Sheik explains that this “evil shadow spirit” has been released, and Impa has gone to seal it in the Shadow Temple but will be in danger without you. He then teaches you the Nocturne of Shadow so you can teleport to the temple behind Kakariko Graveyard.

That means that this entire sequence is just the Shadow Temple’s extended version of one of the Link/Sheik jam sessions for learning the warp songs… but man, is it ever extended! Perhaps it’s partially because of bias that I say this, but this is my favorite of all the Sheik scenes by far (I’m a beast; of course I gotta love a good old fashioned Phantom Shadow Beast). But it’s not just because of Bongo Bongo that I like it. Look, I’m not knocking any of the jam session scenes when I say this — because they’re all wonderful and Sheik is a cool character through and through — but I love this sequence for how much more it piles onto the interactions between these two characters.

Think about it, though. What’s happened in the Sheik sequences up until this point?

That’s all he does. Over and over again. It’s his legacy. (Barring his sequence after defeating Morpha, but that only cuts out #3.) But in the sequence where he teaches you the Nocturne of Shadow, these interactions depart from their structured and very video game-esque nature, and come alive into a sequence that better feels like it’s happening to two real people in an actual world. It’s in this scene that I stopped thinking of Sheik like a construct of the game’s design, meant to facilitate player progression, and started thinking of him as an actual character who would do things in the world when you weren’t there, and who would fight alongside the protagonist if it came to that. Even beyond that, I love this sequence for how epic it is. It’s two heroes fighting against an eldritch shadow entity in a burning village, and after it runs off, the village is drenched by an endless rain. I mean seriously… how much cooler could this sequence get? I used to think that Bongo Bongo’s actual appearance was anti-climactic in comparison to how much buildup he had here…

Grr, I’m an ancient sealed evil. Get on mah drum!

…but I’ve since come to realize how terrifying he actually still is, and appreciate the stylish combination of that horror with his odder elements (the freaking drum). But he still wouldn’t be nearly as cool as he is if he hadn’t been built up by this scene. This monster broke out of an ancient seal and challenged two heroes at the same time before eventually getting hunted down and killed in an evil, dangerous place that seemed like it was made for him. And that entire journey was spent wondering what it would be like to fight it after what happened in this scene. It’s so great and one of the best moments in gaming, let alone the Zelda series, for creating a sense of anticipation. I love it to death.

So what about you guys? What do you think about this sequence on its own, as well as how it stacks up to the other Sheik “jam sessions” and how it contributes to Bongo Bongo’s buildup? Tell me your thoughts on this moment in the comments!