Analysis of the Evolution of Princess Zelda’s 3D Models 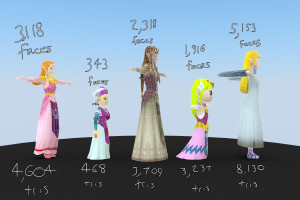 Video game graphics have improved immensely over the years and The Legend of Zelda is a prime example of its growth, beginning with 8-bit sprites and transitioning to fully animated 3D models. And there’s no doubt that 3D animation has come a mighty long way since Ocarina of Time on the Nintendo 64. Imgur user, game designer, and 3D artist John Guerra was thus inspired to pick-apart the workings of five 3D Princess Zelda models. The jump in resolution from Ocarina of Time to Twilight Princess in terms of polygonal faces is shocking, and the animation textures in Skyward Sword explain why its graphics were simpler than its predecessor’s. To see the full analysis, hit the jump!

Guerra’s analyses of the color schemes, texture maps, polycounts, and animations of multiple Princess Zelda models were both intriguing and informative; it makes me wish I knew more about the world of 3D programming. Guerra also does a good deal of 3D printing, he has an online shop for his creations and even takes commissions.

What did you think of Guerra’s 3D Zelda model analyses? Does it make you appreciate certain game’s graphical capabilities more, or less? Do you find the evolution of Zelda’s model interesting? Speak your mind in the comments!