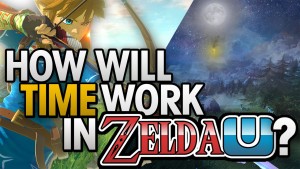 One bit of information about Zelda Wii U that was “leaked” by a Nintendo Representative was the idea that Zelda Wii U would have different enemies at night than it would during the day. This in-game day-to-night progression is nothing new to the Zelda series and was shown in the Wii U title’s gameplay trailer, so YouTube game analyst Zeltik with the help of Commonwealth Realm took things a step further and examined the evidence supporting and the implications of possibly the series’ most extensive day and night cycle.

He claims that the internal clock of Zelda Wii U contains a longer cycle than that of Grand Theft Auto V and Witcher 3, it may even run on a real-time 24 hour cycle! Hit the jump to see his analysis.

Zeltik and Commonwealth Realm have deducted that the time in Zelda Wii U likely runs on an eight hour day and night cycle. They arrived at this conclusion after analyzing the gameplay trailer, which Zeltik acknowledges may not be an accurate gauge considering Nintendo’s continued work on the game. In the trailer, a clock is shown on the gamepad marking 19:00, which he proves is not representing real-time, but in-game time. The clock doesn’t change in the nineteen seconds it is on screen, so Zeltik argues that because the clock has the capability to change time by minutes, its changing by hour is less likely.

Majora’s Mask 3D counted by minutes, and the gameplay video doesn’t show Aonuma pausing the game, so time running more slowly in Zelda Wii U seems the most plausible theory. An eight hour cycle would occur if an in-game minute was twenty real-time seconds, meaning it would have been just near changing in the gameplay footage. It could also be any time increment in between twenty seconds per minute, like thirty seconds per minute for a twelve hour cycle, or even a twenty four hour real-time cycle.

The Commonwealth Realm stresses the importance of time manipulation in a game where time runs this slowly. He notes that Link’s bag on Epona’s back appears to contain a sleeping-bag of sorts, which would likely allow players to sleep until morning, or night, or even specific hours of the day. Certain sidequests may only be available at certain times too, and may coincide with real time like Masked Beedle’s appearances did in Phantom Hourglass.

What do you think of Zeltik’s day-to-night cycle conclusions? In what other ways do you think a long cycle will affect the way Zelda Wii U is played? Would you like having a 24-hour clock in Zelda Wii U, or do you prefer a quick transition of time? Let us know in the comments!