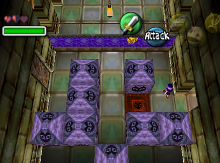 Majora’s Mask was odd in a number of ways, especially when it came to its surreal moments and dreamlike cutscenes. It’s odd, then, that one of the most unusual moments that really stands out from the rest of the game is one where the player simply controls another character, and for only a few minutes! This of course was at the end of the Anju & Kafei sidequest — a massive portion of the game which I’ll probably talk about in more detail next week — when it was time to recover Kafei’s wedding mask from the thief Sakon. A wedding mask. Yeah, Termina’s just… really into masks.

Controlling Link to defeat enemies — but only the simplest sort — and Kafei to complete some block puzzles in a time limit wasn’t really all that remarkable. In fact, the combat and puzzles here aren’t particularly well-made, impressive or memorable. But the moment still stood out to me a lot purely because the game gave me control of Kafei, even if it was for such a short time.

When you think about it, though, this was a first for the series. While some games in other series have given the player control over multiple characters, in Zelda it was always just Link. Unless we’re counting telling Navi what to lock on to or controlling Goriyas and Arm-Mimics as they mirror Link’s movements — and I’m pretty sure we aren’t — no Zelda game prior to Majora’s Mask ever gave the player control over anyone other than Link.

Zelda games are well-known — or infamous, depending on who you ask — for having their own formula. That formula is so well established and closely followed that we call any game that mimics it a “Zelda clone”, like Okami or Darksiders. And since it is so closely followed, any deviation from it within a Zelda game, no matter how small or how common it might be in another game series, is pretty surprising. This was what controlling Kafei was: A surprising deviation. I recall being surprised myself — not shocked but definitely uttering something like “Wait wut?” — and I’d only significantly played two other Zelda games before Majora’s Mask.

As I understand, this moment was surprising and even appealing for a lot of other Zelda fans as well. That’s the impression I’ve gotten, though I haven’t polled it or anything; give me your guys’ stories of how you reacted to this and your opinion on it in the comments! The reason for the surprise I’ve already explained, but as for why people think it’s cool… I think people like deviations in the formula when they don’t come at the expense of the formula. Throughout the Zelda series there are a lot of examples of breaking the mold in small ways, and usually they’re very well-received (Epona is a perfect example of this), so a deviation letting you control another character while the rest of the game still plays as people feel a Zelda game should was a cool moment for a lot of fans.

Beyond that I think a fair number of Zelda fans really like the idea of controlling other characters besides Link. The mask transformations in Majora’s Mask might have also helped to fulfill this fantasy, but Kafei certainly did, and later examples like controlling the Sages in the Temples in The Wind Waker or Phantom Zelda in Spirit Tracks are usually pretty well-received apart from complaints about monotonous gameplay mechanics. I myself also appreciate Zelda games that give the impression that Link is not the only player in the story. I enjoyed both Ghirahim and Zelda in Skyward Sword for this reason, because both of them took action of their own accord even when Link was not around, making the story all the more interesting. In a way Kafei provided this too, as he had his own agenda and did things on his own before the player met up with him in Sakon’s Hideout and took control of his actions as he worked alongside Link… and even then, controlling his actions just means the player is taking control of someone other than Link as they do their own thing, so it’s a similar situation. 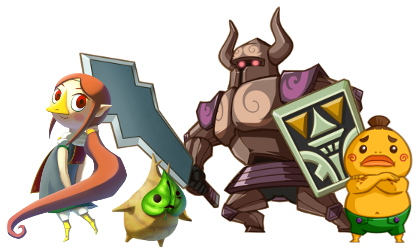 There’s no real point to this; these are just my thoughts about this moment. Again give me your story about how you responded to this moment and what you think of it in general. Did you not think about it at all, or did you find it surprising like me? Me myself… I enjoy these moments of controlling other characters. It adds variety to the game, and even a little realism. It might be cool to have a Zelda game where the other characters you control aren’t always working right alongside Link, but that’s just an idea. Anyway, tell me your thoughts in the comments!