Welcome back to ZD Gallery where every other week we feature an artist and their works of art that pay homage to our beloved Zelda series. This week, we are pleased to introduce Streaac, an active Zelda fan who’s been creating pieces for the franchise for the past year or so, including prints and even a couple comics that are still in the works.

Go ahead and make the jump to see more of Streaac’s work and catch our interview with her!

ZD: How did you become a fan of the Zelda series?

Streaac: When I was in the first grade, my cousin acquired Ocarina of Time for the Nintendo 64. I would watch my dad play through it, and I loved watching (the thought didn’t occur that I could just play it myself). Then we reached the part of the story where Sheik is revealed to be Princess Zelda. That was the moment when I started to understand why the game was called The Legend of Zelda, not The Legend of Link. I love them both, though, and Ocarina of Time is the reason why I still have an affinity for stories with humble heroes and bold princesses (guess which Miyazaki film is my favorite).

ZD: Do you have a favorite game?

Streaac: Tough question! Well, in terms of narrative and its significance in the official timeline, I’d say Majora’s Mask. Artistically, Skyward Sword; I’ll replay that game just to marvel at how the environments are treated in the impressionistic style. I’m looking forward to seeing the artistic treatment of the upcoming Zelda game for the Wii U.

ZD: What inspired you to create your art based off the franchise?

Streaac: I started making Zelda fan art about a year ago. This was around the time Hyrule Warriors was being promoted, and each of the playable characters were revealed one by one. Link and Impa were the first two characters I saw, and Impa’s new design completely floored me — what a badass! Additionally, I had just graduated from college, so I had time to properly study my copy of Hyrule Historia. I started to make doodles of Nabooru, my secret crush from Ocarina of Time, if she were one of the fighters in Hyrule Warriors. As of this writing, Nabooru has not been added to the fighters cast, so making drawings and comics featuring her is basically me scratching my own itch for more Nabooru material. This study of the concept art eventually led to the creation of original Sheikah characters who will star in my fan comic project. Their designs, though not entirely finalized yet, are heavily based off that of Impa, Sheik, Luda, and Renado from Twilight Princess. 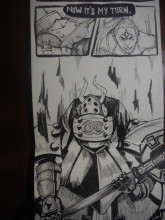 ZD: What mediums do you use for your creations?

Streaac: For illustrations and fan comic pages, I use Photoshop cs6 and a small Wacom Intuos5. Two “highest-noted” comics on tumblr were done with good old pen and paper, and retouched in Photoshop.

ZD: Do you have any ideas or plans for future Zelda pieces?

Streaac: I have a fanfiction comic in the works entitled Lost Lullaby. The story will take place about a year after the events in Twilight Princess, in which the adorable folklorist Impa tells the newly coronated Queen Zelda a tale of the last three members of the Sheikah tribe. I’m aiming to have Chapter 0 done before 2016. There’s also a few more Nabooru-related concepts I’d love to tackle. As for the series of sad portraits featuring Ganondorf, the Hero’s Shade, and Sheik, there’s one more character left to paint before I can call it finished.

If you’re interested in seeing the current progress on Streaac’s comic, Lost Lullaby, you can find it here. Streaac also sells prints, IPhone cases, totes and more featuring her art here over on Society6. And you can follow Streaac and her new creations either on her Twitter or her Tumblr.

What do you guys think of Streaac’s work? It’s kind of different seeing someone try to tackle further interpreting characters like Nabooru and the Sheikah, wouldn’t you agree? As for that last painting she’s working on to complete her portrait series, which character do you think she will use? As always, feel free to leave your comments and thoughts below. Until next time!