YES!!! It’s time to take a look at Nabooru! I’ve been looking forward to this one for a while now, partly because her presentation as a character is the same as those of past Sages, but done differently, which I really liked, but also because of her promise, which I’m really looking forward to hearing your theories, because there are infinite possibilities, some realistic, others being completely off the wall. With that said, I can’t see any reason why we shouldn’t just get straight into this, so come on, let us find out what makes Nabooru such a unique character.

With only one more Sage left to awaken, Link goes to the desert, ‘sneaks’ through the Gerudo Fortress, probably let his eyes wander a little bit, makes his way through a sand storm, and after being ambushed in the Desert Colossus by Leevers, he finds his way into the Spirit Temple… only to find out that he can’t get any deeper than the lobby. Giving up on his duty of saving Hyrule, Link leaves, only to be confronted by Sheik, who teaches him the Requiem of Spirit so that he can return as a child and journey deeper into the temple.

So that’s exactly what Link does. Goes back in time, comes back as child, gets ambushed by Leevers again, finds himself in the lobby of the Spirit Temple, but instead of finding that he can’t progress due to his size, he can’t progress because a Gerudo is blocking his way. Before talking to her, Link again probably let his eyes wander a little bit, but when he does talk to her, she introduces herself as Nabooru, leader of the Gerudo, second-in-command only to Ganondorf, explains that she is against Ganondorf, and asks Link to go through the tiny hole which she can’t get through to go and get the Silver Gauntlets for her, so that she can get deeper into the temple to mess up their plans and do all the monster-killing herself. Well, as you can imagine, Link has a problem with that: he wants to do the monster-killing and mess up their plans, like he has already done on several occasions.

“If you can successfully get the Silver Gauntlets… I’ll do something great for you!”

As we know, Link loves great things: he has embarked on a great journey which holds great rewards, he got the great big Hylian Shield when he was little, and tried the same thing with the great Master Sword, but he was forced to wait until he was older. And then he defied the great Ganondorf, which sort of conflicts with other choices, but there is such a thing as too much of a good thing, or in this case: too many great things. Those words are suggestive enough, but I’ll get into what she could’ve meant later.

Nabooru also says that she is against Ganondorf because he takes from women and children, and that he has killed people. This would imply that the Gerudo only steal from grown men, and then also use them to reproduce, and are really just against men in general. Perhaps that’s why they only produce females: they hate men so much that they’ve mentally trained their reproductive system to only have female children, though, once every 100 years, a male child is born, and to cover up the fact that he is an accident, they make him their king. Anyways, getting back to what matters, it is very odd that a thief would have that sort of ideology going on, which is likely why she is the one who awakens as the Sage of Spirit, in that, despite what she does for entertainment, she still sees boundaries, she still has moral values, when she disagrees with something, she doesn’t sit back and let it go unattended, she is the one who attends to it… or tries to, as we soon find out. 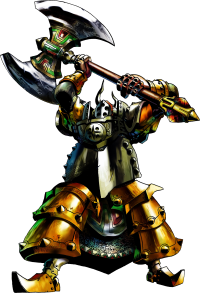 Link eventually comes up against an Iron Knuckle, and after defeating it, he finds his way out onto a ledge, where he finds a treasure chest. He opens it, and receives the Silver Gauntlets, and just as he’s about to go and give them back to Nabooru, he is instead treated to a nice view of Nabooru being sucked into a vortex by two evil witches. Nabooru cries out to him that they’re using black magic on her. His height is impaired, not his vision, he can see what they’re doing. Speaking of impairments, the hearing of those old cows must be impaired, as, despite being hovering about a meter or two above Nabooru, they don’t realise that she is shouting out to her accomplice, who is watching, and after she gets completely sucked into the vortex, they simply go back into the temple without a care in the world.

Unable to use the Silver Gauntlets as a child, Link travels to the future so that he can use them to get deeper into the temple. And this is what I was talking about when I say Nabooru has the same presentation as other Sages, but done differently: all the other Sages, Link met as a child, and after travelling to the future, he has to save those characters, and they awaken as Sages; but with Nabooru, Link doesn’t meet her when he is initially a child, only meeting her as a child when he cannot progress as an adult, and then after meeting her as a child, he returns as an adult to save her, and she awakens as a Sage. So, same presentation in that he meets her as a child and rescues her as an adult, but done differently in that he doesn’t initially meet her as a child. I really liked this as, when I first played the game, I had grown tired of the usual formula by the time I had to go and find Impa in the Shadow Temple, but, not remembering any other key character from the past, I was looking forward to the possibility of a completely new character being the final Sage, and that’s exactly what happened.

As an adult, Link makes his way through the rest of the Spirit Temple with the Silver Gauntlets, finding another Iron Knuckle, defeating it, and claiming the Mirror Shield. When he finds his way to the heart of the temple and confronts those old hags from before, they reveal themselves to be Koume and Kotake, we deduce that they are Gerudo witches, and then they set yet another Iron Knuckle on him. Link hacks and slashes at the armour, and soon finds a brainwashed Nabooru underneath. Having removed the armour, the brainwashing wears off, because it was such a strong enchantment, and Nabooru remembers herself. However, it’s not long before Koume and Kotake reappear, taunting her about making her serve the great Ganondorf even longer and brainwashing her again, and when she tries to escape, they zap her, and she disappears. When I first saw this, I thought they had killed her, but it’s more likely that they simply did away with her, teleporting her to a different chamber that she couldn’t escape from, so that they could deal with her when they were finished with Link. 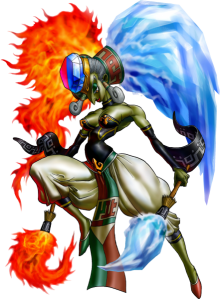 They soon disappear again, and Link goes into the next chamber in search of them, and luckily for him, there they are. After a quick two-on-one battle with the sisters, the two merge to form a single body, and again, when I first played this, I actually thought they had not merged bodies, but combined their powers into an enlarged, differently-garbed, once-again-brainwashed Nabooru. Oh, how wrong I was, and thinking back on it, I don’t know how I even came to that conclusion, but it doesn’t matter. What does matter is that Link defeats them, they somehow earned a couple of tickets to heaven despite their evil doings, and Link is soon reunited with Nabooru in the Chamber of Sages.

She remarks on how the little boy she once knew became the handsome man she now talks to, and instead of keeping her promise, now being unable to, with her new position as the Sage of Spirit, she gives him yet another useless medallion. As Link is returned to Hyrule from the Chamber of Sages, she once again alludes to her mysterious promise:

What was her promise? Theories range from a kiss, to an arranged marriage, to the idea that she may have been lying to Link from that start. But, from the fact that she wishes she had kept her promise after discovering that Link would become a handsome man, and saying she would do something great for him, I believe that Nabooru will simply have given Link the chance to spend his life with her, as the Gerudo have no concept of marriage, only taking ‘boyfriends’ every now then for reproductive purposes.

What do you guys think she had in mind for Link? Do you think that Nabooru did lead the Gerudo into only stealing from men, or that they had another code of conduct? Did you like the slight reconfiguration of the introduction to the character? Let me know in the comments.