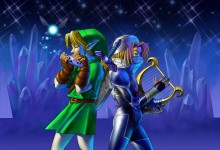 It seems that no matter the Zelda game, whether it be excellent or average (there are no bad ones!), one of the few things you can count on is superb music. In fact, I feel that one of my least favorite Zelda games, Spirit Tracks, has one of the strongest soundtracks in the series. Despite being a kid-friendly adventure series, the Zelda franchise has in its sound library a variety of songs that bring out a wide range of emotions in players. Overworld songs tend to be catchy and upbeat, dramatic cutscenes are usually calmer, almost serenades, and dungeons can be intimidating to downright scary. So I not only want to know what your all-time favorite song is, but which ones in each type of location? Which types of songs do you like most? The following songs are not necessarily my favorites, but they certainly are the songs that come to my mind when I think of Zelda!

How could I not include this one? This song is the Zelda series. It is one of the few songs that has appeared in multiple games and undergone various alterations. Whether it be the original 8-bit version, or Fi singing Skyward Sword‘s “Song of the Hero,” this tune will forever be in every Zelda fan’s memory. It is instantly recognizable and always a pleasure to hear.

In my opinion, there is no better travel music in the history of the Zelda franchise, perhaps even in video game history, period. I find myself getting so caught up in this catchy tune, that I get disappointed when I reach my destination. While Phantom Hourglass did the best it could to preoccupy you between destinations, I still couldn’t help but feel bored. All Spirit Tracks had to do was provide a killer music track to fix this little problem. You know you have an awesome video game song when players would rather listen to it than actually play the game.

I liked this song enough to learn how to play it on guitar. And since I can’t even play the guitar, that’s saying something. Possibly my favorite on the list, this song has always been and probably always will be a song on my iPod I never skip (well, this and “Stickerbrush Symphony” from Donkey Kong Country 2). The slow drum start rolls perfectly into the beautiful combination of wind and string instruments that have a very Scottish feel to it. I can’t wait to hear what The Wind Waker HD is doing with it. Will they try to improve on the original, or preserve the masterpiece as is?

Like the Wind Waker theme, there seems to be a cultural sound attached to this track. The sound of trumpets and maracas give this desert theme a fitting Mexican vibe. One of the catchiest tunes in Zelda’s library, this is the rare kind of song that can be stuck in your head for days, but you won’t mind. I really don’t have much else to say about this one. Just give it a listen, and you’ll understand why it’s so great.

By far my favorite dungeon theme. Remember in the intro when I said some dungeon themes can be downright scary? This is the only one I could think of that fits such a description, which is all the more reason it belongs on any top Zelda songs list. The dungeons are supposed to be the most frightening and eerie parts of the games, and this is the only song I can think of that evokes such fear. Of course, after multiple play-throughs of Ocarina of Time, I can breeze through the Forest Temple in less than a half hour, but this song is something I never get tired of hearing. That spooky chanting always gives me goosebumps, and makes me feel like ghosts could pop out at any minute, even though I know they won’t.

One of the few truly depressing tracks I can think of, Midna’s Lament also manages to be absolutely beautiful. It speaks highly of a composer’s skills to combine sadness and beauty so elegantly. What makes such a feat even more impressive is that the song really is very simple. Two piano tracks played over each other, with (what sounds like, correct me if I’m wrong) a synthetic keyboard making an occasional appearance. I know this part of the game is supposed to make you want to rush to Hyrule Castle to save Midna, but the gorgeous music ironically makes me want to just stand still so that the music doesn’t have to end.

Music has always been an important aspect to video games, but the Zelda series always seems to go above and beyond to provide players with some of the most versatile tracks in gaming. Whether the songs be cheerful, depressing, frightening, or just all-around epic, if the Zelda brand is stamped on it, you know you’ve got a winner.

What do you guys think? Which Zelda songs are your favorites? Comment below, and let’s talk about it!