From the musical goodness of composer and video game arranger that brought us the mini album “King of Light and Shadow” as well as “Fi’s Farewell” and “Midna’s Lament, Rozen releases a new album. This time dedicated Majora’s Mask, called “Time Once Lost”. This album contains a total of ten different tracks such as “In the streets of Clock Town” and “Astral Observatory”, the album is available for purchase right now on Loudr. With over thirty minutes of music to enjoy, its…

Eimear Noone’s “The Celtic Link” Album is Available for Pre-Purchase, With Bonuses

A while back, we covered the Kickstarter of the “Songs of Zelda:The Celtic Link” music project, previously titled “A Link to the Celts”, and created by Eimear Noone. The Kickstarter was very ssuccessful, and the digital version is now up for pre-purchase! Eimear, one of the talented composers of the Symphony of the Goddesses, has put together an amazing album with a unique Celtic style that does not typically touch the music of Zelda, and you can now buy it…

“Songs of Zelda: A Link to the Celts” Reaches Goal, Announces Stretch Goals

Eimear Noone’s Songs of Zelda album, A Link to the Celts, has recently reached its $30,000 kickstarter goal, and in only eight days, no less! There are still several days left until the kickstarter is closed, and you can still donate, so some sweet stretch goals have been announced. There are currently two goals listed, but more are said to be coming soon! Check out the goals after the jump!

Last week, on Monday’s Gossip Stone, we asked everyone the ways that Zelda’s music has effected them, and we got to hear some great stories. Alongside the question, we announced a giveaway where people could win one of two free download codes for Scarlet Moon Records’ Prescription For Sleep: Game Music Lullabies Volume II album. We have gone through the responders, and randomly chosen our two winners! The winners are: TFMtommy and Xguy! Congratulations! The winners have been given their…

Gossip Stone (Album Giveaway!): How Has Zelda Music Effected You?

Zelda is notorious for the consistently amazing soundtracks to come out of each new entry to the series. To celebrate this, a hit symphony with shows worldwide is still going strong, and of course, fans regularly release remixes, custom renditions, and Zelda-inspired original songs. The sounds of Zelda are quite influential, but it is the personal stories that show it. We would like to hear how the series’ music has effected you, your life, and your view of the series…

Notable game-based record company Scarlet Moon Records will soon be releasing their newest album, Prescription For Sleep: Game Music Lullabies Volume II, a sequel to their popular album released about a year ago of the same name. There will be several remixed versions of the relaxing tunes from many classic games, including Majora’s Mask‘s Oath to Order, which we now have a short snippet of! Hit the jump for the music preview, as well as some bits from the album’s…

Just a few months ago, we featured the Smash Bros. tribute album entitled Harmony of Heroes, including 101 tracks and over seven hours of music. The team behind this project recently announced a brand new set of additional tracks, including several new Zelda songs. Harmony of Heroes takes fans from all over the world, arranging a variety of music genres from several Nintendo franchises. Hit the jump to take a look! 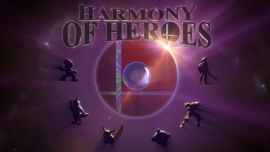 Harmony of Heroes is a fan made album honoring the music of the Super Smash Bros. series, featuring several Zelda arrangements. The album is the largest fan-arrangement album, including seven hours of music with over 101 tracks. It is a global effort, teaming up with many different groups and talented musicians. This incredible album features memorable Zelda tunes, so hit the jump to take a look!

Hylian Lemon, project leader of OverClocked Remix’s old Essence of Lime album, released a new remix album for Oracle of Seasons. As with Essence of Lime, the Lime of the Season album has several musicians gathered together to give fans new versions of music from an often under-appreciated game. Check out the trailer after the jump!

It seems like so, so long ago that Nintendo so thrillingly revealed the sequel to the mega-hit Switch game The Legend of Zelda: Breath of th... read more

Hello everybody and WELCOME BACK to the second annual MUSICAL MARCH MADNESS. The premise is simple: 64 songs will go head to head in a serie... read more

A new decade may now be upon us, but we at Zelda Dungeon wanted to take one final look at the decade that was before we shut the door on it ... read more