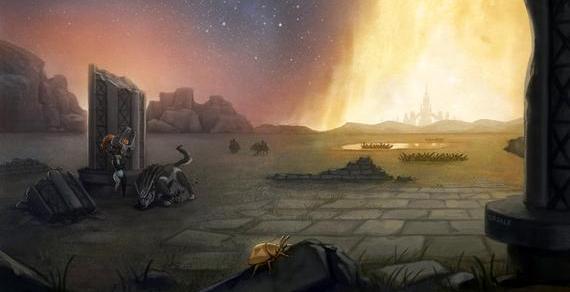 If all else fails, use fire.

You can call me Sadko. My name is from an old Russian fairytale about a bard who goes on an amazing adventure to find gold and love. That is why I go around telling stories myself. His story ended with a sad twist, hopefully my tale does not.

I am Coloradan born and Arizona raised. I survived the desert for 21 years before making the trek out of the Valley of the Sun and into the City of Trees. Here I met my wife and our wonderful fur children. Before leaving Arizona I went to the Art of Institute of Phoenix and got my Associates in Culinary Arts. I was a professional chef for over 8 years in Arizona and California.

I write in my freetime and proofread professionally for a few webcomics on Webtoon. I have even appeared in print copies of one. I am working on two novels and several webcomics of my own, one of which I am illustrating myself.

I have been an avid gamer since I was around 4 or 5 years old. I played my first Zelda game when I was about 8, it was actually ALttP. Afterwards I learned it was third in a series and searched for the first two. I loved the gameplay and excitement of the little 8bit elf boy who refused to face his shield away from the mountain. It meant a lot to me that it was so important and critical that the hero was left handed, being one of only two left handed people I knew for so many years.

I have played nearly every Zelda game, only missing out on a few handheld adventures. My favorite Zelda game has of course changed over the years as new ones have been released. I would have to say though that it is a tie between Twilight Princess and Skyward Sword. One of the biggest reasons is the fact that we could swing the Master Sword ourselves! Name one Zelda fan who hasn’t wished they could do that. I dare you. The story and gameplay in both games was so amazing. Learning more about the entire world that Hyrule resides in. Seeing all the different species and races before they became united by the royal family. Learning how the story began and how the symbols we all know and love came to be. Nothing can beat those feelings.