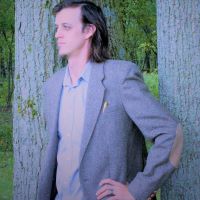 Hello everybody, I’m David Wayne Nystrom and I’m a writer. I joined Zelda Dungeon in 2019 after years of writing for myself.

I currently live just north of Milwaukee, Wisconsin but have also lived along the Gulf Coast and grew up in Cincinnati, Ohio. I am an avid fan of hockey, curling, and football (both kinds). I spent a few years serving in the United States Air Force before settling down here and working as a civilian. My wife and I have known each other since we were in middle school, before starting to date in 2012, getting married in 2013, and welcoming our amazing son in 2015. My music interests change frequently, but lately I’ve been hooked on K-pop because it just makes me happy! My biggest hobby though is writing. I’ve had a few short stories published, in addition to a piece of Zelda fan fiction that I spent 5+ years on and a novel series that is aiming to debut in 2019.

My love affair with the Zelda franchise began when I was at a friend’s house and we were all huddled around his 11-inch TV watching him play Ocarina of Time. By Christmas that year, I’d asked for and received an N64 along with a copy of the game and was hooked. I’ve played nearly every game in the series and own almost all in some format or another as well. My top three are Ocarina of Time, The Wind Waker, and Link’s Awakening. The story behind The Wind Waker is one of my favorites and was actually the inspiration behind my biggest piece of fan fiction that I’ve ever wrote.

Look for my articles here on Zelda Dungeon! If you want to find out more about me, you can follow me on twitter (@davewayne09) or check out my blog (davidwnystrom.wordpress.com).