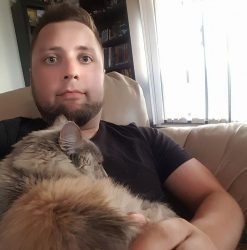 Hey friends, I’m Andy Spiteri and I serve as the Editor-In-Chief of Zelda Dungeon. I’ve been with the site since December of 2016, joining the day before the annual Video Game Awards.

I’m from the snowy lands of Canada, living in Calgary, Alberta, which is right beside the Rocky Mountains. Being Canadian, naturally I love hockey and strong beer. I got into video games before I can even remember, and I’ve been playing them all my life. I also have a pretty respectable graphic novel collection (mostly Batman, Nightwing, and Green Lantern) and I like to think of myself as a film buff. Everyone in Calgary loves country music and thinks they’re a cowboy, so naturally, I love rap and synthwave music. I live with my fiancée Samantha and my cat/nemesis Zora. I once quit drinking coffee for a year, and now I’m back up to two cups a day… I have issues.

My favorite Zelda game was my first: Ocarina of Time. Really, what more can you say about it that’s never been said? I remember playing it at the age of 10 or so, and even being a young lad back then, I could immediately tell that I was playing something special. The rest was history… I fell in love with Zelda and have played several Zelda titles a year since. I also think Skyward Sword is amazing. Fight me.

Find me on Zelda Dungeon’s weekly podcast, The Champions’ Cast ,every Monday, on the Metroid themed podcast, the Omega Metroid Podcast, every Tuesday, as well as the podcast Virtual Theater, a really great show about really bad video game movies!. Ask me about video games and you’ll probably get a long winded answer.