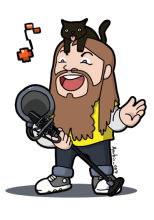 In the last two weeks famous acapella singer and YouTube personality Smooth McGroove has done three covers of Majora’s Mask songs. McGroove is no stranger to Zelda acapella covers; twenty six of his covers are Zelda related, a dozen of those covers have one million views, and his Palace Theme cover is well on its way to joining those ranks.

Additionally, McGroove has covered many Majora’s Mask songs in the past, including the Song of Healing, Stone Tower Temple, Astral Observatory and the Song of Unhealing. His description of this video suggests that it will be some time before he decides to revisit Majora’s Mask music. But, you can find his three new covers of the Oath to Order, the Milk Bar Theme, and the Deku Palace theme bundled after the break!

“Three songs in a row from this game. I haven’t done that in like two years. Feels good to stick with a soundtrack for a while!” – Smooth McGroove

Which one did you like best? Are there any other Zelda songs you think Smooth McGroove should cover? Please share your thoughts in the comments below!