Posted on November 22 2015 by Brandon Schmitz 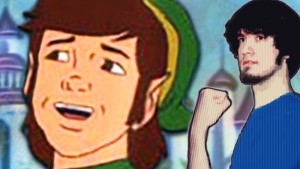 Austin “PeanutButterGamer” Hargrave’s fifth annual Zelda Month continues with not only the first countdown of the lot, but also a deeper look at an infamous cult gem. The former, specifically, is a collaborative video in which he and Game Theory’s Matthew Patrick run down their least favorite pieces of equipment from throughout the series. From downright useless items such as the Deku Nuts to those with particularly frustrating properties — I’m looking at you, Giant’s Knife — it’s a solid selection. Meanwhile, PeanutButterGamer’s most recent video is a follow-up to his look at the first episode of the 1980s Zelda cartoon.

Check out both videos after the jump!

As with most of his work, PeanutButterGamer’s deadpan humor shines throughout these two features. Coupled with the collaboration on The Game Theorists’ channel, the back-and-forth between him and Patrick complements each other’s style. I hope to see more tag-team projects from them down the road.

The animated Zelda series has been discussed and parodied at length throughout the past decade, especially, but again, PeanutButterGamer’s sensibilities add something refreshing to the conversation. As uncharacteristic of the Zelda games as the cartoon seems today, it’s tough to blame the show runners too much in that regard. Similarly to the Super Mario Bros. Super Show cartoon around which the series was shown, it aired before Nintendo established many of the elements that people currently associate with Zelda. I’m sure it was always viewed as the corniest thing in the world, though. I mean, when naming something that houses all of his minions, Ganon couldn’t have done much worse than “The Evil Jar.”

What do you think, though? Have you been enjoying this year’s Zelda Month so far? Let us know in the comments below.