Nintendo Details VR Functionality in Breath of the Wild 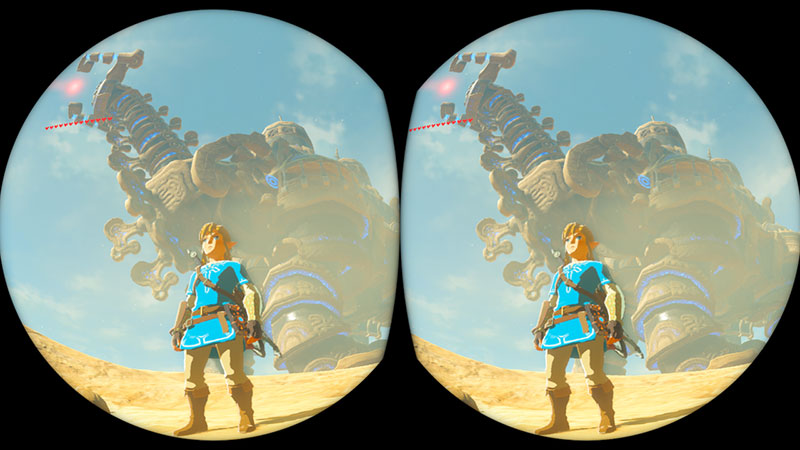 On April 25th, VR functionality will be added to Breath of the Wild via Nintendo Labo’s VR Kit, which launched late last week. In order to brace fans for virtual reality’s imminent arrival within the latest Zelda title, Nintendo and Breath of the Wild technical director Takuhiro Dohta recently shared a wealth of information about the game’s VR functionality on the official Zelda website.

Dohta explains how players can enable VR in Breath of the Wild after a free update on April 25th:

“Once you’ve updated the game’s software, it’s easy to use. During play, open the menu screen, select System, and select Options. Then set the Toy-Con VR Goggles option to ON, and simply insert your Nintendo Switch console into the VR Goggles and attach its Joy-Con controllers to the sides. When you look through the VR Goggles, you’ll see the world of Hyrule stretching out before you in VR!”

The blog also includes a video tutorial for this process.

Dohta then discusses exactly how VR functionality will change the Breath of the Wild experience, as players will be able to see through and control the in-game camera with the Labo VR headset:

“The controls and overall game content are the same as normal, but you’ll be able to get a new perspective on Hyrule. And as you look around with the VR Goggles, the in-game camera will move accordingly.

It’s possible to switch the display method at any point in your adventure. We recommend taking a look through the VR Goggles when there’s something interesting to see, like a location with a great view, a favorite character, or a favorite piece of equipment.”

And lastly, Dohta sheds light on how this virtual reality mode came to be, as well as the development team’s philosophy when implementing the feature:

“The concept of this update is to add a little twist to the world of Hyrule to give players, even those who’ve played the game a lot, a reason to come back and get even more enjoyment out of the game. This is why we have designed this new feature so that it can be used with your existing save data.

The idea for this started when the Nintendo Labo development team gave us a demonstration of the VR Goggles for the first time. The experience was quite a surprise, and I started thinking that maybe we’d be able to do something with them in The Legend of Zelda: Breath of the Wild. First, we thought about lots of different things; locations that would be nice to see in VR, enemies that would be fun to fight… In the end, The Legend of Zelda development team reached the conclusion that, rather than change the game, we should let you play it as it is, and instead just make it so that you can use the VR Goggles to see whatever parts you want.

Since The Legend of Zelda: Breath of the Wild is a third-person game—meaning you play while watching your character, Link, on screen—our challenge became coming up with a way to create a fun VR experience without changing that core aspect of the game’s design. Ultimately, we arrived at a VR Goggles experience that’s a bit different from the one you’ll find in Nintendo Labo: VR Kit, so I hope you’ll give it a try.

One of the core goals during development for The Legend of Zelda: Breath of the Wild was to make it a “multiplicative gameplay” experience, in which players could find their own fun and find their own ways to play. The nature of the Nintendo Switch system multiplies the fun further by giving you the freedom to play wherever and whenever you like. I hope that by creating yet one more new way to play, with the VR Goggles, the fun can multiply again!”

It sounds like Nintendo is still finding new ways for fans to enjoy Breath of the Wild. Perhaps this new VR mode will motivate me to explore Hyrule once again.

Breath of the Wild will become compatible with Nintendo Labo’s VR headset on April 25th, via a free update.

Do you plan to take advantage of Breath of the Wild‘s VR feature? Have you already played around with Nintendo Labo’s VR Kit? Let us know in the comments below!

Comments
Sorted Under: Breath of the Wild, Games, News, Nintendo News, Zelda News
Tagged With: No tags were found for this entry.