Finally, Fi reveals something that is useful to Link. Or, at least something Link is able to exploit. Just because he’s the most courageous hero in all of Hyrule (or Skyloft, as the case may be) doesn’t mean Link is necessarily the most moral. Sometimes he just has to take a break from the adventuring business and try out some other hobbies.

So what exactly has Link done this time? And how possibly could Fi have said something actually useful? Hit the jump to read this week’s comic courtesy of Corpse Run Comics! 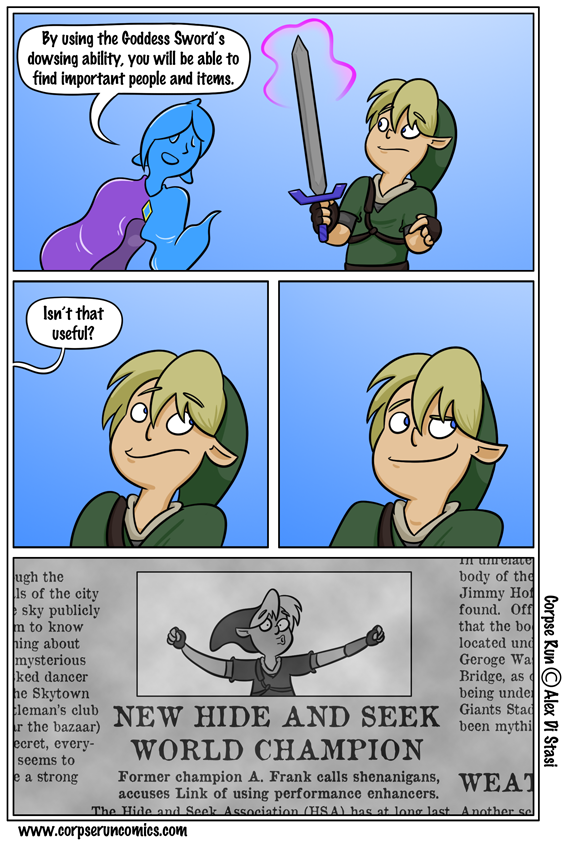 It seems Link has an easy enough time winning with just the Goddess Sword’s dowsing ability, but perhaps there is something that he can use to make his hiding skills better. Maybe use the blue tunic and just spend his time at the bottom of a lake, or just hid at the back of Turtle Rock, because I highly doubt the dungeon is widely accessible to the other hide and seek competitors.

But as immoral as this is, Link still had to save the world (or at least take on the challenge) to obtain the Goddess Sword, which is not an easy task. If anything, Link does deserve to win a hide and seek competition for his troubles.

What other competitions could Link win using some of the items he gains on his quests? Let us know in the comments!