Celebrating NPC’s And The Lessons They Taught Me 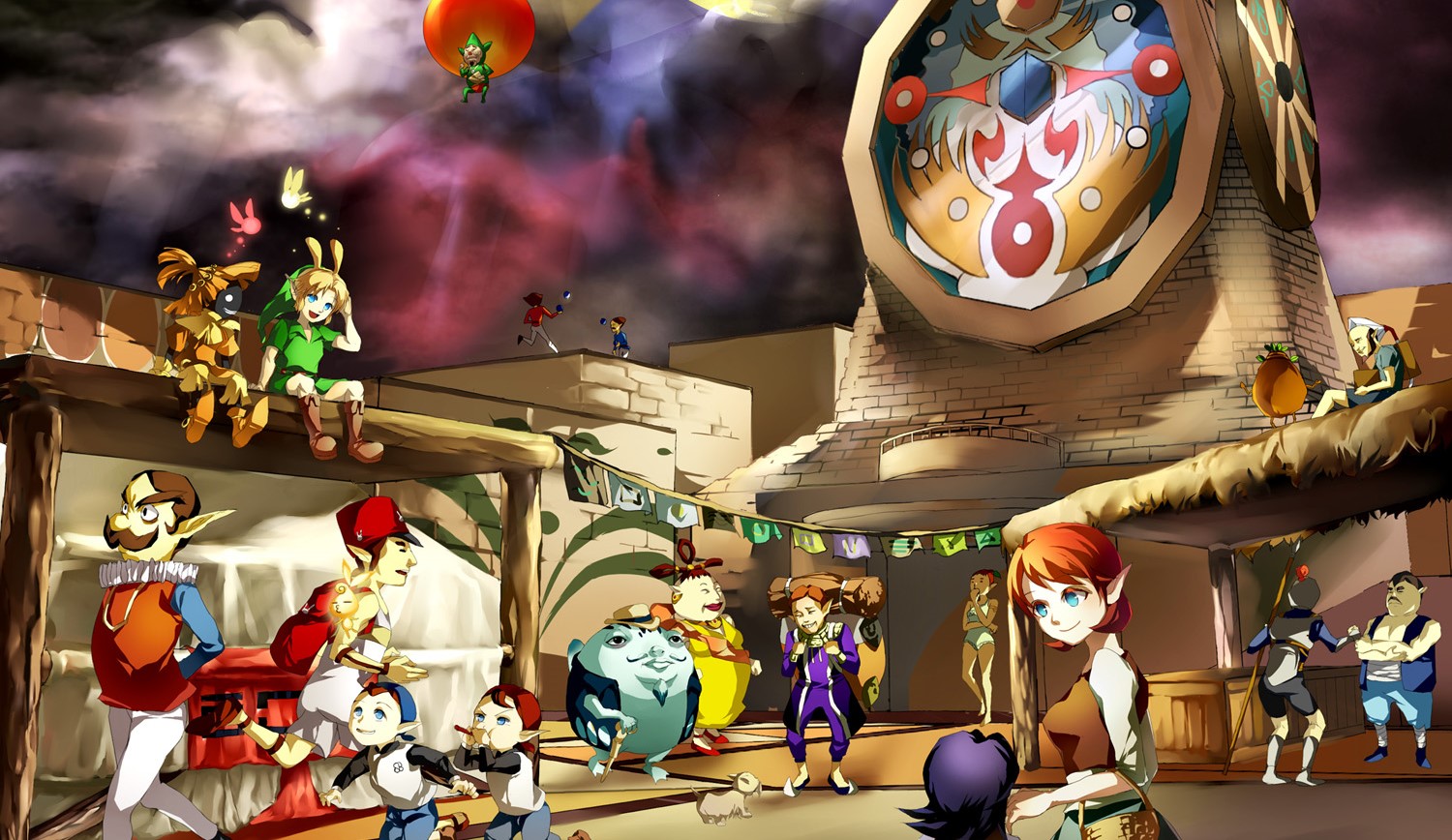 Majora’s Mask reaches its 20th anniversary this year, and there’s no arguing that there is plenty to celebrate. This title was the second installment in the Zelda series to utilize 3D graphics, making it a truly memorable game for its era. It’s even had a well-deserved upgrade, having been remastered for the 3DS in 2015. What’s more, on top of its gameplay and graphics, Majora’s Mask warranted critical acclaim for the complexity of its story.

If you haven’t had the opportunity to play Majora’s Mask, here’s the gist: Link falls into the alternate reality world of Termina immediately after the events of Ocarina of Time. It falls to our favorite hero to save this land from the imminent doom of a falling moon within three in-game days. And the cause of such a predicament? That would be the Skull Kid, who stole a certain mask from the Happy Mask Salesman, who in turn warns Link about a “terrible fate”. Oh, and the Skull Kid has been terrorizing the denizens of Termina on a personal level too.

Now, the main plot in Majora’s Mask is pretty good, if you ask me. But if you want something really special, take a look at this game’s NPC’s.  You’ll find that they are rich in their own personalities and problems. In fact, I think these characters may be the strongest, most memorable personalities within the Zelda franchise — the main trio aside, of course. And because of this, I have found that there are a few lessons to be learnt from them. 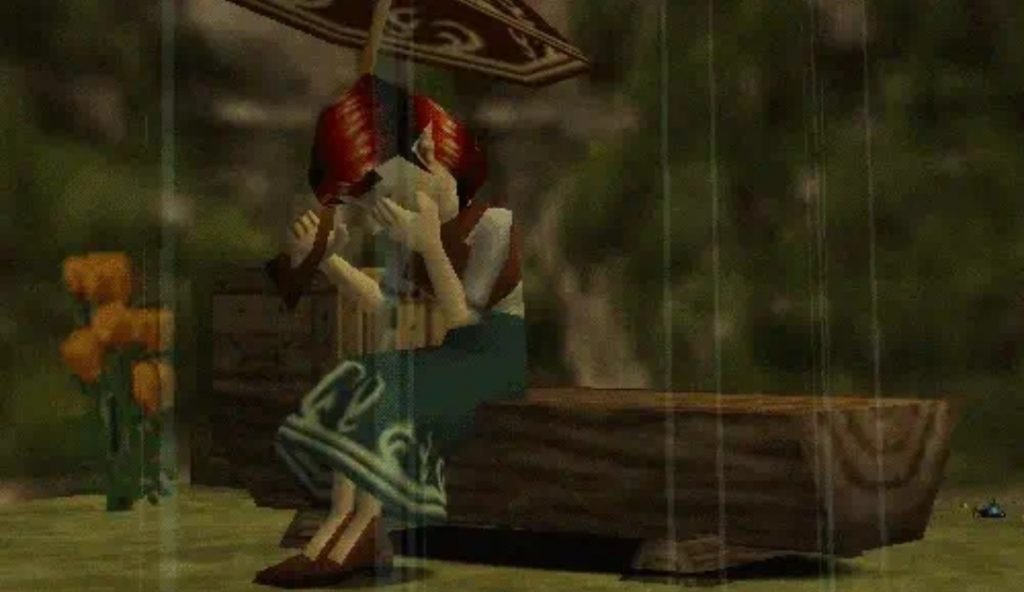 So, what makes the NPC’s in Majora’s Mask so special?  Well, first of all, these characters aren’t bland. They have their own individual and intricate lives outside of filling the game’s population. Take Anju, for example. She looks after her seemingly senile, old grandmother while also running the Stock Pot Inn too. She may seem like your run-of-the-mill inn-keeper, but deep down, she is harboring a terrible grief. Her fiancé, Kafei, is missing as their wedding draws closer, yet she still holds herself together. Furthermore, Anju has to deal with her own mother’s suspicions surrounding her best friend and Kafei.

This girl certainly lives through an emotional rollercoaster, and yet she still ploughs on! And we, as the player, get to experience her highs and lows along with her. We watch as Anju maintains the reception at the Stock Pot Inn, or goes on a lonely walk to the Laundry Pool. We can eavesdrop on her private conversations in the staff room. In fact, if you follow Anju’s associated side-quest through to completion, we can even witness her reunion with Kafei! Her ups and downs are what make Anju’s existence so personal to many fans of this game. We can appreciate how resilient this character really is, even when the chips are down. Anju stands to remind us that in life, there is always a reason to keep going! 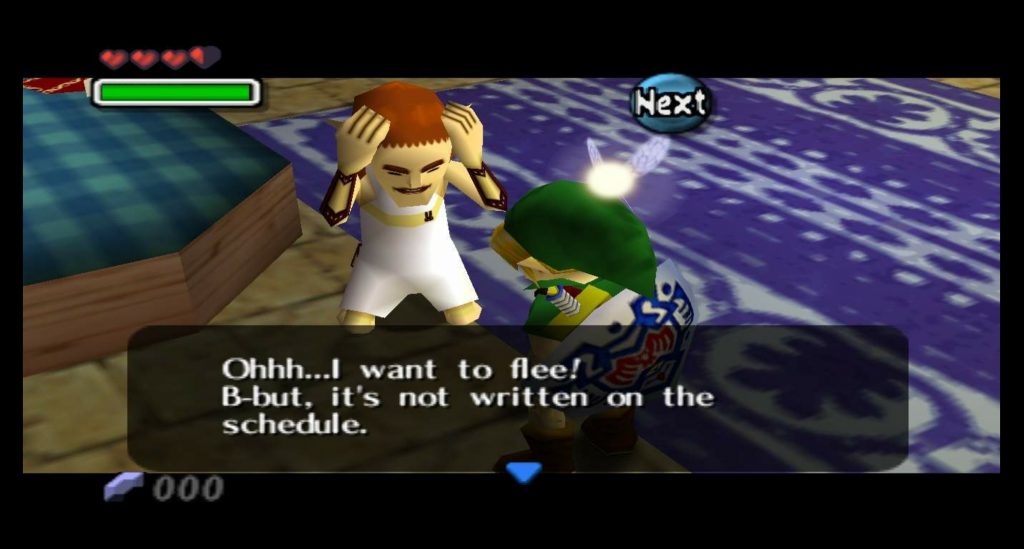 Another NPC that I think deserves some recognition is the Postman. This guy is just so dedicated to his duty — and I don’t mean that he simply delivers the post each day. The Postman takes his role quite seriously, including the confidentiality of those who utilize his services.  He actually plays a pivotal role in Anju’s associated side-quest, delivering a letter to her on behalf of Kafei. The Postman is quite ambiguous about where the letter came from, which drove me mad when I first played the game. I just couldn’t understand why he would keep such a secret!

What really broke my heart, though, was some of the Postman’s final scenes. This guy just can’t abandon his postal duties, even though the Moon was about to fall. He is terrified by his impending doom, but trapped by his commitment to work. I really, genuinely felt sorry for him. When I finally finished Anju and Kafei’s side-quest, I was never more pleased than to watch the Postman flee Clock Town. For me, the Postman serves as reminder that work is important, but your mental and physical health should be top priority! 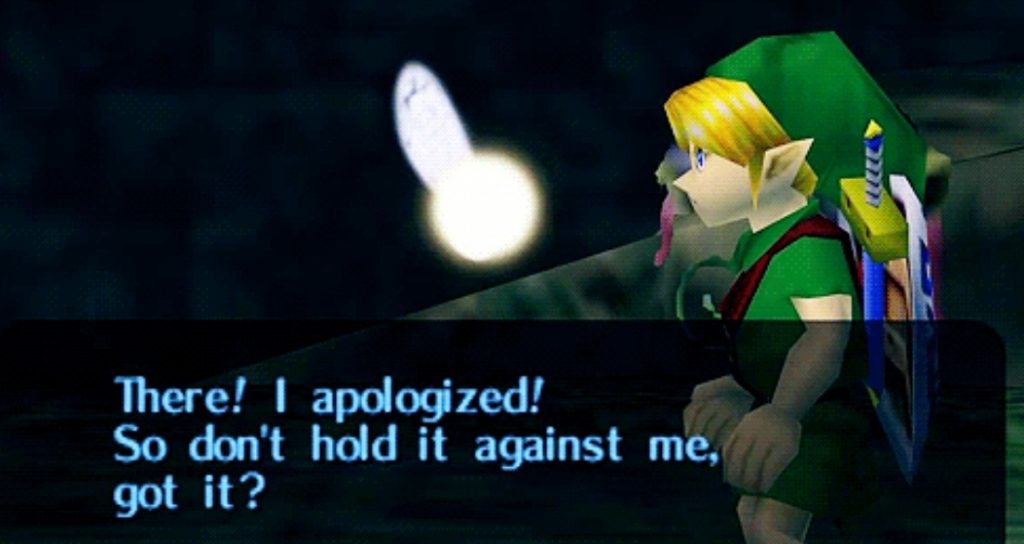 Next up, I want to show some appreciation to Tatl. She may start out as an unwelcome sidekick with a bad attitude, but I did warm up to her in the end. Behind her facade of sarcasm and blunt hostility, Tatl is actually quite protective over those she cares about. Furthermore, she is also an informative companion and, finally, a good friend.

You might wonder how I can draw such a conclusion from a companion character, especially within the Zelda series, where companions have rarely had much personality. So, I’d like to point out that Tatl’s character takes a real u-turn, which is especially influenced by her relationship with both Link and other NPC’s. Tatl reacts badly to being separated from her brother by somebody she counted as a friend. She takes her misfortune out on Link, finding his company intolerable, apart from his present usefulness.

I think Tatl’s initial hostility towards Link is an obvious wall of protection, and it’s a beautiful thing to watch it crumble as the game continues. Eventually, she opens up to Link; she shares personal experiences and even apologizes to him for her part in Epona’s abduction. What’s more, Tatl finds the courage to stand up to the Skull Kid after all of his bullying. This little fairy stands to remind us that our relationships are pivotal to our behavior, and that in turn, we all deserve kindness and respect. 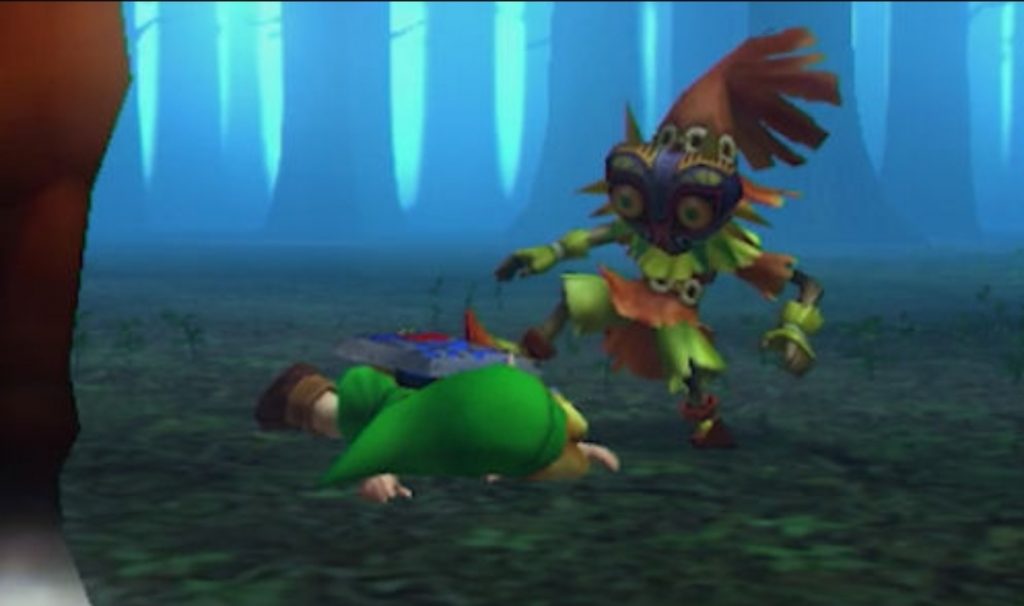 We couldn’t discuss the characters from Majora’s Mask and forget about the Skull Kid. He might just be a puppet to the spirit of Majora itself, but if it weren’t for the Skull Kid’s own personality traits, the mask might not have been so successful in wreaking havoc throughout Termina. The Skull Kid is a mischievous character who enjoys a good joke at absolutely anybody’s expense. But through its mask, Majora is able to heavily influence the Skull Kid. It twists his thoughts, turning him from mischievous to downright cruel.

The Skull Kid behaves quite impishly, playing tricks on his friends. The root cause of his behavior is he feeling abandoned by the Four Giants, beings which he felt close with. The people of Termina already resent the Skull Kid because of his mischievous reputation, so further abandonment is bound to make his insecurities even worse. This, along with Majora’s influence, might be the fuel that fired the Skull Kid’s actions towards his fellow denizens.

The lesson that I took from the Skull Kid is to be aware of my own actions. My reaction to something that I find hilarious may negatively affect those around me. My own actions could be the root cause of someones unhappiness, and so I do try to consider my family and friends when making decisions that may affect them. And I notice that, in return, I’m surrounded by people that offer me their unparalleled kindness and friendship. 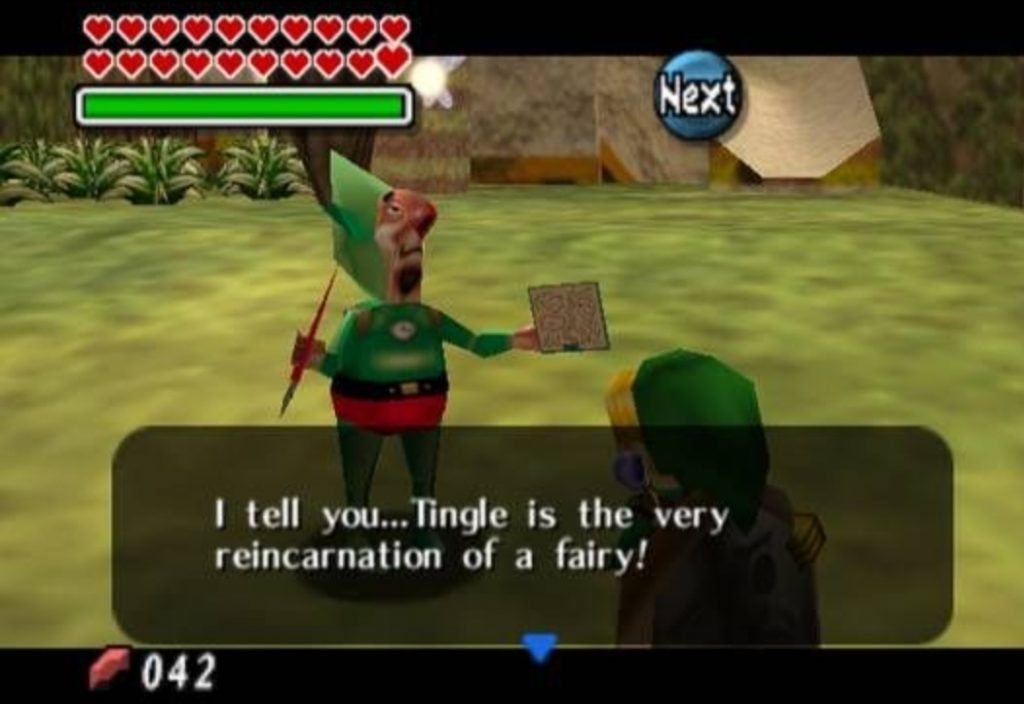 Finally, it’s time to give Tingle his dues. We couldn’t talk about the NPC’s in Majora’s Mask and not mention our second-favorite guy in green! Tingle made his debut in this title, dancing around Clock Town and floating with the aid of his big, red balloon. He has now become somewhat of a staple in the Zelda series, appearing in multiple titles since. Tingle really does believe that he is the very incarnation of a Forest Fairy. He waits around for a fairy companion to join him, happily selling maps of Termina in the meantime. Tingle even made his own magic words, and warns you not to steal them:

Tingle’s lesson is very simple, and you don’t need to be delusional to apply it to your own life. Simply put, if you can’t do the thing you love, then love the thing you do. Apply this to any aspect of your life, and you will surely see changes. Positivity goes a long way! 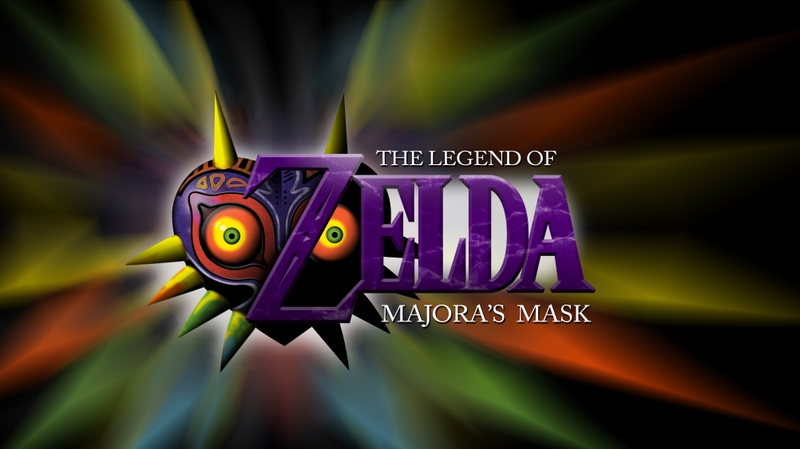 So, these are only some of the characters from Majora’s Mask that have taught me a lesson. Their lives have left a mark on me, making their personalities so much more memorable. The very fact that NPC’s can do that is amazing, especially as their respective video game reaches 20 years old! Kudos to these vibrant, colorful characters and all that they represent.

Majora’s Mask really is chock full of flavor. The story is fantastic, the gameplay is timeless, and the  NPC’s are the spice that makes everything nice. So, I’m going to grab my game and get stuck back in! Let the celebrations begin!

Judy Calder is a Copy Editor for Zelda Dungeon.  She takes care of the Fan Fiction Friday series on the site, and loves a good fairytale.  Majora’s Mask is in her top 5 Zelda games.  You can follow her on Twitter here.