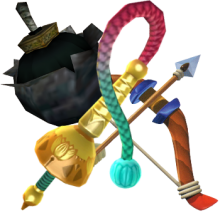 Are new items better, or returning items? This question has gone through the head of many-a Zelda fan, and rarely has a clear answer been found. To find a clear answer, there are two assumptions that we have to make: firstly, that the term items refers only to items that are used to progress through a certain dungeon and gain access to other areas in the overworld; and secondly, that returning items can be split into two subcategories: staples and recurring. So, with all those formalities out of the way, let us continue!

The term ‘staples’ refers to something that is consistent with a religion, culture, or series. For example, rice is a dietary staple in India. But if we’re talking in terms of items and the Zelda series, staples refers to items that have appeared in nearly every Zelda game. Prime examples of this are the Bow and Bombs, as they have appeared in all but three or less games.

Staples help make a Zelda game feel like a Zelda game. Like when you’re going through a transition phase, familiar people and objects help you accept this change, the nostalgia reminds you that things aren’t changing completely. And this is true for when we get a new Zelda game, in early trailers, we look for items such as the Bow and Bombs, as they help reassure us that this new game will stay true to our ideas and impressions of the Zelda series.

On the other hand, staples can also restrict the series. Just as fans were getting sick of linearity in Zelda games, some are also getting sick of seeing the same items recycled repeatedly. I myself had gotten bored of opening treasures chests and getting the Bow, Bombs, or the Boomerang, and upon seeing the screenshot of Ravio’s shop from A Link Between Worlds, I groaned out-loud at the sight of all these returning, boring items.

But which perspective wins out? Are staples more nostalgic than repetitive, or vice versa? Everything has positives and negatives, but when the negatives outweigh the positives, you have to reconsider the value of this object. Oftentimes, the solution to this problem is to simply take a break, and this is where recurring items come in. 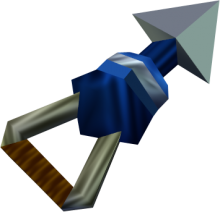 Recurring items are items that have been featured in the Zelda series several times, but only occasionally, such as Bombchus and the Hookshot. As with staples, recurring items help assure the audience that a new Zelda game is not completely different, and at the same time, aren’t as boring as staples, due to less reuse.

Another positive about recurring items is that they can be used in different ways when they are reused in a new game. In Ocarina of Time and Majora’s Mask, I didn’t particularly like the Bombchus, as you simply placed them on the ground and hope that they went the right way and hit the target. But when they were brought back in Phantom Hourglass, I liked them much more, as you could now draw out the path that you wanted them to follow, and the only issue were your drawing skills, or a moving obstacle getting in the way.

Because of these new uses for old items, there is always that excitement whenever you see that particular item in a trailer for a new Zelda game. But there is a way that you can be even more excited about an item that you see in an early trailer…

When you see a new item in a trailer for a new Zelda game, excitement and anticipation race through your veins, only being topped by the excitement and anticipation of seeing new dungeons and characters. Why? Because this is a never-before-seen instrument and you have no idea how it might work (unless it shows it being used in the trailer), and you find yourself wondering what (else) it might do! 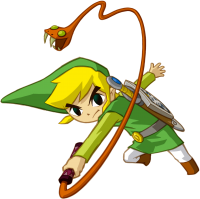 The first time I saw a trailer for a Zelda game that was about to be released was for Spirit Tracks, in which, I saw the Whirlwind and the Whip in use. I thought they both looked brilliant, blowing into the microphone to make Link blow into the Whirlwind, and I was astounded that a Zelda game hadn’t featured a whip item in the past. And upon actually playing the game and using the items for myself, I was not disappointed!

But, like everything, there is a downside to new items. Sometimes, you can get a new item, only to be extremely underwhelmed by the uselessness of the item outside of its original purpose. Prime examples of this are the Spinner from Twilight Princess and the Whip from Skyward Sword. The Spinner was a great idea, and I thought it would make traversing Hyrule that much more interesting… but no, it doesn’t work unless there’s a clickety-clack track nearby (which is weird, as I would’ve thought the power source would be in the Spinner, rather than the track, but maybe’s it’s one component of a circuit, and can’t work without the other?).

I was dismally appalled at the use of the Whip in Skyward Sword. With the Whip having been used as an item and a weapon in Spirit Tracks, I thought the same would happen in Skyward Sword, and it could’ve been expanded with the use of MotionPlus for supposedly 1:1 movement, and use the Whip to wrench enemies’ weapons out of their hands, and maybe to lasso Keese and then smack ‘em against a wall to kill them. But no, it was used only as an item in the Ancient Cistern.

So which sort of item would you prefer for a new Zelda game, for example, Zelda Wii U? Would you like to see staples, recurring items, or completely new items? Let me know in the comments!