Inspired By Zelda: The Surreal, Dreamlike Atmosphere of Anodyne 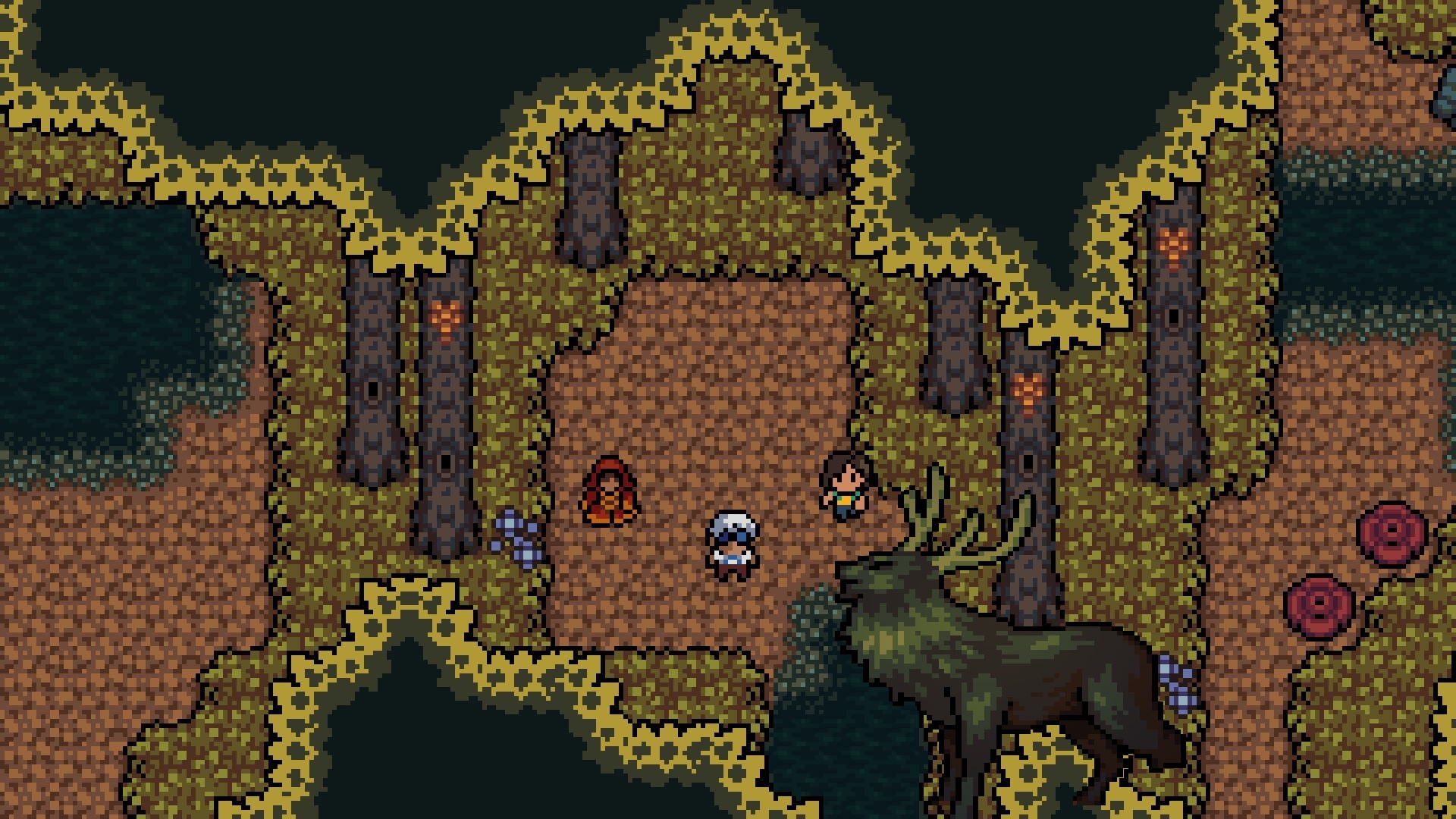 There’s no other way to put it: Anodyne is fricken’ crazy.

Don’t get the wrong idea about that either – it’s crazy in a wonderful, beautiful way. But after finishing the main campaign and exploring the land of Anodyne (aptly named The Land), I can’t really think of a better way to put it. But let’s back up for a second and start from the beginning.

The Legend of Zelda: Link’s Awakening is one of my favorite Zelda titles. Part of the big appeal of that game for me lays not within its dungeons, items, or overworld – all of which are good, but not mind-blowing – but within the story the game weaves and the emotions that it creates. There’s something about that cheery, happy-go-lucky world that just seems… wrong. Like something isn’t what it seems. Like there’s some kind of dark secret hiding underneath. Sure enough, as you progress in that game, you discover the world is a dream, and the only way to return Link to his reality is to wake up the dreamer, and in doing so, destroy this magical world and its wonderful inhabitants. 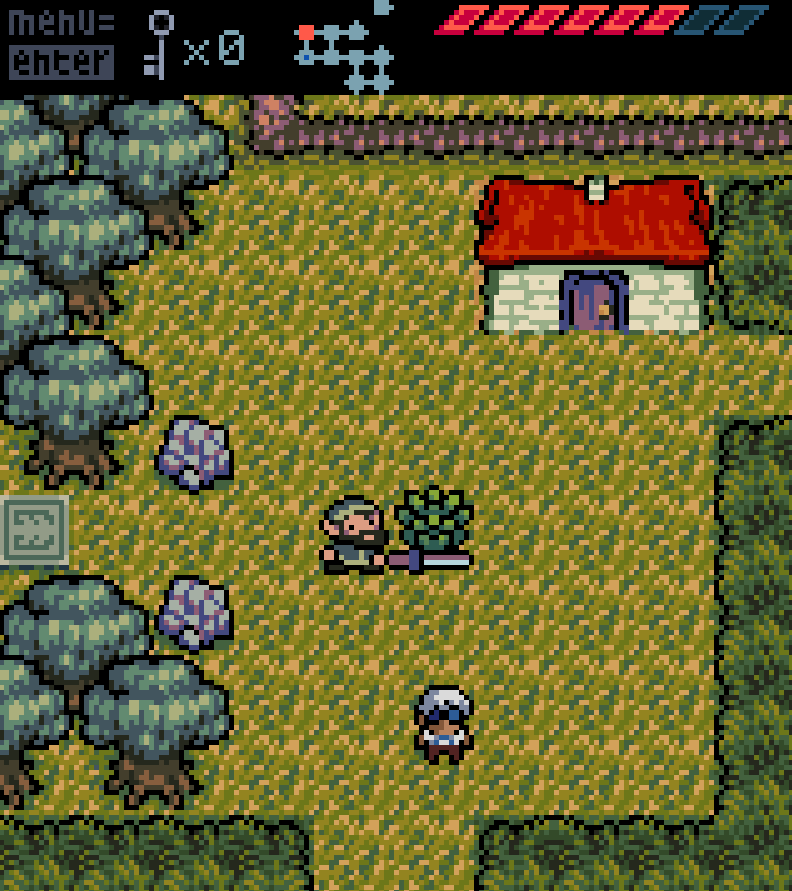 That feeling of dread, of doubt, of apprehension is what makes Link’s Awakening work for me. Anodyne takes that concept and runs with it.

To catch everyone up: Anodyne is a top down 2D Zelda-style game developed entirely by Sean Han Tani and Joni Kittaka that revolves around a playable character named Young attempting to navigate The Land, acquire collectable cards, and crawl through dungeons, all in an attempt to reach something called The Briar. Along the way, Young is assisted by a Rauru-like figure named Sage, and befriends the spunky Mitra.

Getting some perfunctory stuff out the way – the dungeons in Anodyne range from serviceable to really good. Zelda vets shouldn’t have a hard time navigating them, but will likely enjoy them nonetheless. Items aren’t a major part of Anodyne either; you have your jump shoes and that’s pretty much it, which is funny since one of the first things you do when you start is run into someone selling a bunch of items (his prices are steep, but as you’ll find out, money doesn’t exist in The Land anyways, marking the first time Anodyne plays with your expectations of what is normal). In short, gameplay is pretty much what you’d expect from a ‘Zelda-like’ title, with the developers going for the ‘if it ain’t broke, don’t fix it’ mentality.

One of the common complaints I’ve had during my Inspired By Zelda series is the lack of great (or even memorable) music in the games I’ve reviewed so far. Luckily, Anodyne bucks this trend. The soundtrack is great, and carries an ominous tone to it. Anodyne is a game that lives and dies by its atmosphere, and clearly the developers knew how vital music is to creating that atmosphere, so it’s refreshing to see lots of care put into it. 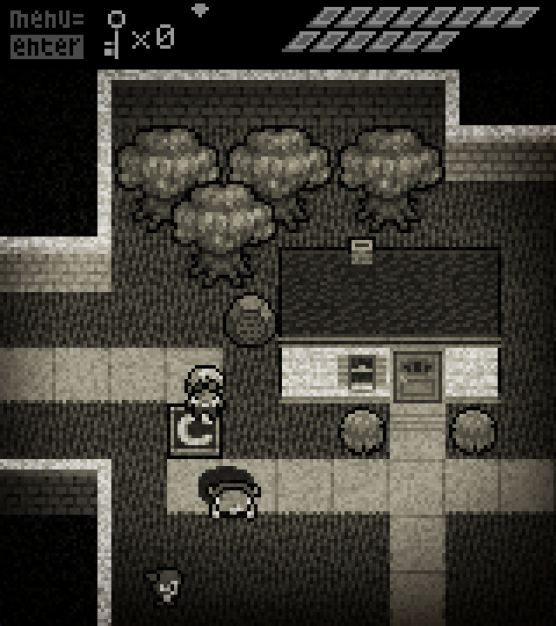 As I just said, atmosphere is where Anodyne really shines. Whereas Link’s Awakening builds up that feeling of uneasiness gradually, Anodyne lets you know right away that something is off and nothing is what it seems. In this, it echoes Majora’s Mask almost as much as it does Link’s first portable adventure. As much as Anodyne echoes those two Zelda games however, I couldn’t help but feel there was another title Anodyne shared a lot of the same DNA with: the movie Donnie Darko. The surrealism and willingness to tell an unconventional story is ever present in both of these properties, and being a fan of Donnie Darko, I felt drawn to Anodyne even more.

There’s not really a conventional story to speak of, and this could be a turn off to some players. I just finished the game and have no idea what the hell it was about – I have a theory, but at the end of the day, every player is going to have their own interpretation. I’m usually a story guy when I’m playing games, but in the context of everything Anodyne had thrown at me thus far, I thought it was fitting there wasn’t a perfect bow to tie everything together.

The best way I can describe what’s going on in this game is to compare it to a dream. When you’re dreaming, something normal can change to something fantastic in a second. Physics, laws, rules… none of that needs to make sense. The people in your dreams can morph into someone else in a flash, and the entire setting of your dream can shift to something completely new without you even knowing it.

This is what Anodyne is like. The Land starts off simple enough, with a lake, and a cliff, and a forest. But all of a sudden, the forest changes into a futuristic purple backdrop straight out of Hyper Light Drifter, with Young listening to giant talking cubes speak about their existential crisis, before moving one screen up to find himself in a dilapidated hotel. The lake has a dock where you can jump in the water, but instead of falling into said lake, you sink into a red ocean full of friendly, headless giant monsters roaming around. The cliffs transition into a 8-bit esq. block maze that spans several screens before you enter a dungeon that features acrobats that have been mauled by lions as the primary antagonist. Along the way, you’ll meet strange beings like Jack the bear, who will tell you how many times he’s had intercourse, or Miao the cat, who wants to learn from Young but runs away at danger.

Does this sound like a lot? Welcome to Anodyne!

This game really embraces this surreal dreamlike quality, as towards the end of Anodyne, you get an item that allows you to swap the games pixels, allowing you to move trees, rocks, and other obstacles that prevented exploration previously. There are times when I swapped something out to create a new path and walked off to a screen, not knowing if I was creating a glitch or it was intentional. Even when the games screen starts bugging out, I was questioning whether this was by design or not. Some of the later collectable cards are found only by causing these glitches, so it adds to the very surreal, very meta experience. It’s Anodyne, doing what it does best: taking a players preconceived notions of what should be and throwing them off a cliff.

It’s hard to explain what Anodyne is; to fully appreciate it, you need to experience it for yourself. What I can tell you for sure is I would recommend it to any fan of The Legend of Zelda series, particularly if you’re favorite games in that series are Link’s Awakening or Majora’s Mask. Anodyne may be crazy, but it stands out among many other cut-and-dry games by making players think. I may have no clue what just happened in that story, but I know Anodyne will be on my mind for some time to come.
That’s gonna do it for Inspired By Zelda this month. I’ll be back to cover the upcoming sequel, Anodyne: Return to Dust, when it releases in early 2019. Until then, you can look forward to next month, where I’ll be plundering treasure from across the uncharted seas! Until then!
Andy Spiteri is the Editor-In-Chief of Zelda Dungeon. Catch up with the previous installments in the Inspired By Zelda series here, and leave your recommendations for his next review over on Twitter!
Review copy of Anodyne provided by Analgestic Productions. Anodyne is available on PS4, Xbox One, Steam, Google Play and the App Store.

Comments
Sorted Under: Editorials, Editorials, Games, Inspired By Zelda, Link's Awakening, Original Content, Slider, Zelda Like
Tagged With: No tags were found for this entry.