Welcome to another installment of Inspired By Zelda, the series of articles looking at games new and old that take inspiration and create a foundation based on some of the classic Zelda titles we know and love. Our aim is to spotlight the games that Zelda fans might enjoy adding to their catalog. Up today is Ocean’s Heart by solo developer Max Mraz and published by Nordcurrent Labs, available on Nintendo Switch and PC.

Released for PC in 2021 and Nintendo Switch in 2022, Ocean’s Heart immerses the player in the winds of island life, the waves of the wide sea, and the swashbuckling heroics of a good pirate tale. This retro-inspired exploratory RPG sees protagonist character Tilia searching for her father and her best friend Hazel following a pirate attack on Tilia’s home shore of Limestone Island.

A variety of Zelda titles have been invoked by fans and reviewers when it comes to the game’s spiritual inspiration. Its post-Great Flood archipelago environment, seafaring story, and its music beats channel The Wind Waker energy. The top-down perspective, bright art design, and sprite aesthetic reminds many of The Minish Cap. Everything from the frequent occurrence of abandoned ruins to the game’s emphasis on exploration to Tilia’s outfit mirroring the Champion’s Tunic draws strong parallels to Breath of the Wild.

Ocean’s Heart hosts a boatload of individual features reminiscent of the Zelda series as a whole: dungeon-crawling, foraging and crafting, upgrading weapons, solving puzzles, learning spells, facing difficult environmental effects and enemies, and collecting heart containers. There are even secretive paths on the map leading to quests that allow you to turn up the game’s difficulty. The developer behind Ocean’s Heart, Max Mraz, has infused a great deal of creativity and optional content into the game, which makes it delightfully replayable. 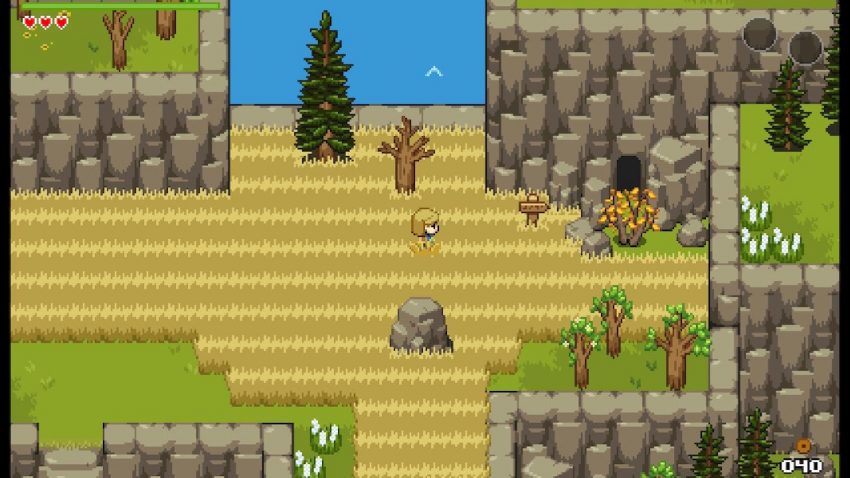 During a conversation with Gaming Nexus’ Eric Hauter, Mraz discusses how the initial development of Ocean’s Heart led to his initial fan game release: a Zelda-like tribute to Bloodborne titled Yarntown (2020). Available for free PC download, Yarntown lets players take a shorter walk through recognizable Bloodborne areas and fight familiar enemies and bosses from a top-down perspective. Technically, Yarntown is Mraz’s younger project, emerging from an outpouring of ideas and inspiration born too late into Ocean’s Heart‘s development to implement. Mraz explains:

In early 2017, I started Ocean’s Heart… It was just like a little hobby… When I got to a point when the game was first “done” – I’d had friends play, tested it and fixed all the bugs that I could find, and it was start to finish feature-complete. I went around pitching it to publishers and not getting a ton of bites. The publisher pitching process took probably several months. So, I made Yarntown just because I still had ideas.

It’s clear that all of Mraz’s game projects (including another 2020 release titled Hallow’s Eve, available for PC download for $4 USD) come steeped with charm and a deep love of the creative process. Mraz has built all three games mentioned here through the Solarus engine, an open-source project that has seen the rise of many Zelda-like fan-created games. Mraz loves the process of creation so much that his side projects include putting together item and enemy assets for other new programmers and developers, so they can drag and drop into their own games. Of the Solarus community, Mraz says:

The community is really big on sharing and open source and helping each other. We want all of the code to be reusable, so everyone else can make good games.

Seeing games like these made out of the desire to put something fun into the world is what sets developers like Mraz apart. I particularly appreciate developers who create assets so others can learn how to fit them together, furthering the craft and instilling the love of game development in others. This love shines through Ocean’s Heart brightly, and for me, it’s what gives the game its, well, heart.

Filling in the Map 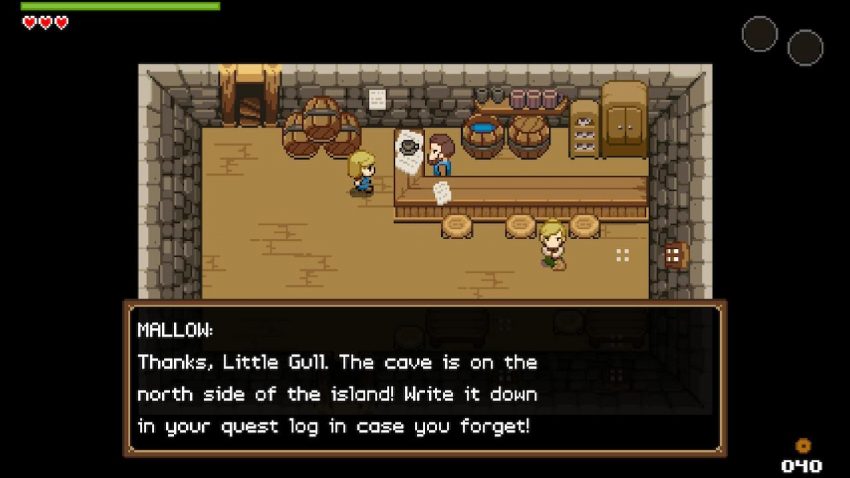 As Tilia puts together leads and dreams of the day she can finally track down the pirates who attacked her home, you get to fill in a storied map. At times, you are fulfilling interpersonal errands and solving mysteries in the streets of ports and towns. In other instances, you’re exploring the wilds and ruins of the coasts and marshes while dodging enemy creatures. With compound place names such as Marblecliff, Spruce Head, Ivystump, Snapmast Reef, and the Forest of Tides, just to name a few, Ocean’s Heart makes use of coupled elements to make new experiences with familiar components. The story thus constantly feels both approachable and novel.

The game’s enemies are varied in their presentation and inspiration. Along the journey, Tilia encounters monsters across a spectrum from natural to ancient to eldritch. Wild humanoids punch the air as they jump out of the grass. Mandrakes pop out of the ground to attack. Mushrooms emit a poisonous gas as vengeance for being struck down. Rock elementals drop boulders from the sky. Ocean’s Heart is imbued with a deep air of mystery, which its enemies carry quite handily.

Running beneath the surface of the gameplay and main plot is a historical and mythological background that takes a peek from behind the curtain in nearly every abandoned ruin, dungeon, and library. Tilia’s world is an old one, a world that has survived a Great Flood, magic spells, old kings, and ageless oceanic deities. Even having played the game once through already, I think I’ll learn even more about the history of Ocean’s Heart‘s world on more playthroughs, as its secrets and stories are hidden in dialogue, books, and cultural icons all across the map.

If the story and visuals weren’t enough, the game’s music and ambient environments complete its air of fantasy and mystery. Mraz developed all of the game’s music himself,  shaped by his time writing music for a Dungeons and Dragons podcast he was working on concurrently with Ocean’s Heart‘s development. Each track feels as though it it nestled right in with its environment, from the warmth of a kalimba sound reflecting the fields of golden wheat on Limestone Island to the forlorn bird-like cry heard in the track for Lotus Shoal. The combination of visuals and ambient touches like these really brings something special to your experience playing as Tilia in this wild, mysterious world. 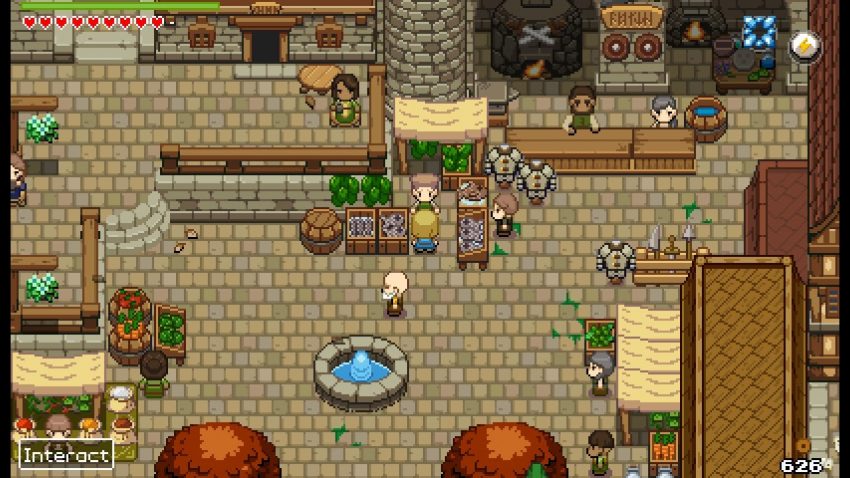 As you progress through the game, you get to explore the various philosophies of the people who live and fight alongside Tilia. She strives to become a volunteer navy member like her father, someone others look up to and can depend on in times of trouble. The player can help her explore this aspiration by leveling up her sword and armor, making potions and power-ups for her journey, and exploring side quests that further outline her character and personality as well as the economic and social structures of her world. Gathering hearts is a crucial aspect to Ocean’s Heart‘s gameplay. Some enemies are so overpowered they naturally gatekeep “late-stage” areas of the game. I certainly appreciate this approach in lieu of making these areas locked overtly, as it complements the game’s exploratory style and sense of freedom.

There’s very little I disliked during my time playing Ocean’s Heart on the Switch. While some reviewers have complained about everything from the game’s (lack of) difficulty to its supposedly lackluster characters to how zoomed out the game’s map can feel at times, I see many of these things as unique strengths. While you can’t zoom in on the game’s map to tell exactly where you’re going within a given area, I appreciate how true-to-life the game’s map feels, especially for the fantasy era Ocean’s Heart seems to be evoking. Its characters are often lighthearted and sarcastic in the way they respond to their problems. While this may make them less than dynamic, these kind of character interactions are perfect for introverted people like me looking to settle into a cozier, less socially-draining experience.

When it comes to the game’s difficulty, while there aren’t any menu options for changing the difficulty level, there are methods within the player’s natural exploration of the game that can provide them a more harrowing experience. I think this method of difficulty adjustment is right in line with Ocean’s Heart‘s particular narrative flavor. The one thing I could personally do without is how sensitive the edge of docks and piers can be when Tilia gets close to the water. I can’t even tell you how many times I’ve lost hearts from getting stuck in a movement loop falling into the water multiple times in a row! If you’re experiencing any kind of Joy-Con drift while playing Ocean’s Heart, this could quickly become frustrating for you.

A Zelda-Like with the Heart of the Ocean 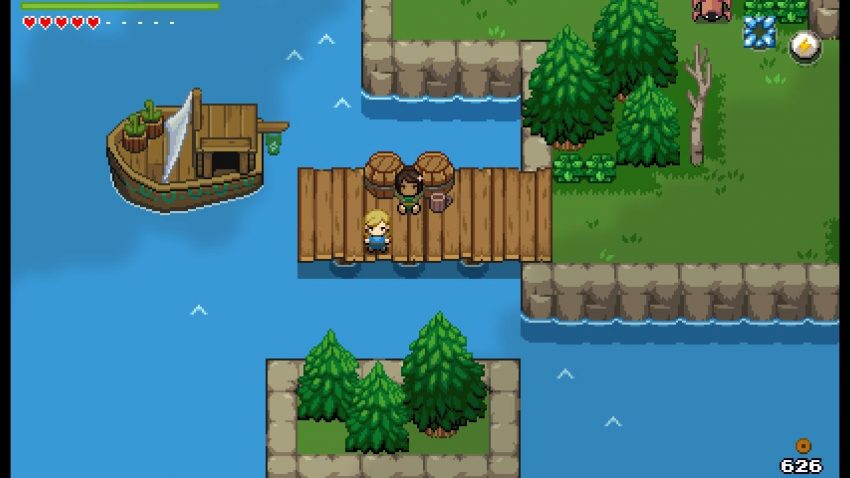 The whimsical optimism and occasional snark of the game’s protagonist Tilia will most certainly pull me back into Ocean’s Heart for another adventure next time I’m feeling the need for a little inspiration and self-assurance. Tilia’s story helps me feel like I, too, can tackle my greatest monsters with the right attitude and preparation. Aesthetically, Tilia resembles Zelda‘s Link, right down to the playful rhythmic bob of blonde hair as the character sprite moves around the map. A primary difference between the two, of course, is that Tilia does have her own dialogue lines, and there’s seldom anything plain or neutral about them, whereas Link is often limited to silence or Yes/No types of responses designed to allow player input in furthering the story or gameplay.

When it comes to Ocean’s Heart‘s Zelda-like status, it rises above the negative connotation of Zelda Clone, taking what players love about the Zelda franchise and expanding it within Mraz’s particular art direction and story. Ocean’s Heart doesn’t just copy and paste ideas or designs. From the game’s opening menu screen, you can feel the game breathing with its own original pulse. I actually would love to see the next Zelda game embrace this more understated, immersive style which allows the player to piece information together on their own depending on how much they are willing to explore. The way the opening screen of Ocean’s Heart blends environmental ambience with a simple animation showing off just a nibble of what the game’s world has to offer gives me an immediate sense of the game’s presence. The wind pushes the clouds and tousles the fall foliage as the player looks on an old empty building and the rippling of the sea in the distance. Ocean’s Heart communicates so much by overtly saying very little. 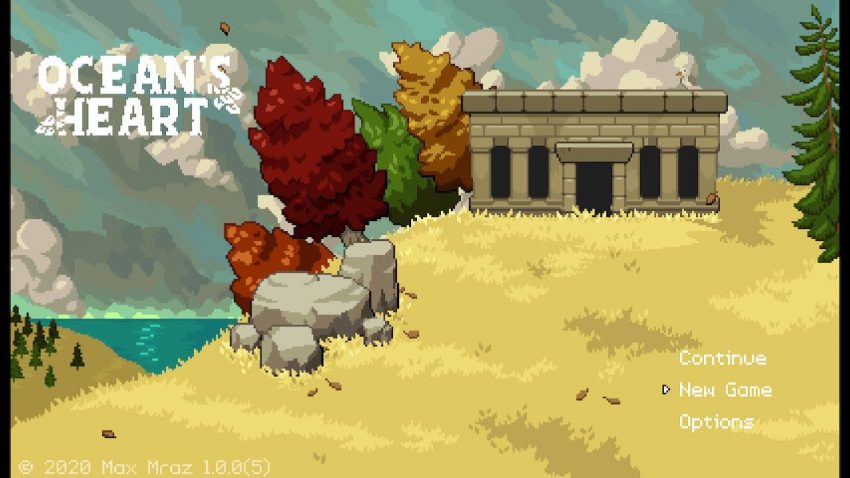 Ocean’s Heart is a solo developed Zelda-inspired RPG that packs spunk, adventure, and a whole archipelago into a compact, heartfelt package. While the game won’t offer much to those looking for complex combat, in-depth character arcs, or an intensely challenging experience, it’s a perfect game for Zelda lovers with its inspired art style, music, and emphasis on finding your own path. I would particularly recommend it for players looking to settle in for a comfortable afternoon of filling out their map while foraging along the coasts and splashing through the rain and wind  – all from the safety of the blankets on one’s couch, of course.

Ocean’s Heart is available for digital download on the Nintendo Switch and on Steam for the PC  for $14.99 USD (although you never know when it might be on sale!). Happy swashbuckling!

Comments
Sorted Under: Breath of the Wild, Editorials, Editorials, Games, Inspired By Zelda, Original Content, Slider, The Minish Cap, The Wind Waker
Tagged With: No tags were found for this entry.