Gossip Stone: Should there be an Actual Economy in Zelda? 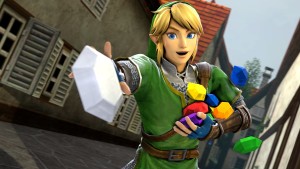 In the fantasy world of Hyrule, not much concedes to the restrictions of reality. But with Zelda Wii U’s shift into open world gaming, it wouldn’t be unthinkable for a more real economy to present itself. Modern open world games are sometimes more realistic than what the Legend of Zelda is used to, and adapting the series to fit around a true economy is one way for it to be more realistic without damaging the integrity of its fantasy elements. Fluctuating item pricing and availability due to supply and demand or the socioeconomic state of a shop’s location could add more structure to the economy.

Though this may change the usual abundance of rupees in Hyrule, it could also allow for Link’s different interactions to improve his chances of earning money or paying lower prices.

Supply and demand is the king of industry, without this concept there is no tangible economy so that’s the first thing to implement in Zelda in order develop one. No shops have really been in competition in a Zelda game (aside from Malo Mart’s feud with Chudley’s Fine Goods and Fancy Trinkets Emporium), but if shops were made to vie for customers, prices would go up or down depending on what was in stock or whether the shop had a sale to bring in patrons. Because shops in Zelda are typically placed one-in-every-town, there’s never been a need to adjust prices depending on the competition. 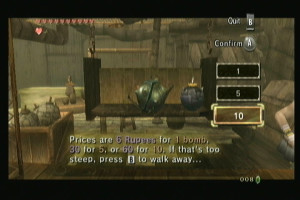 In Twilight Princess, for example, Barnes’ Bomb Shop was pretty much the authority on bombs, and exclusively sold bomblings. For this reason, the player usually had to put up with its pricing. And though it wasn’t brutal, it could’ve been. With a monopoly on the bomb market, the player would’ve been forced to pay any price for certain bombs. So with the move to open world, and boundaries between areas stripped, shops may very well need to compete with each other. Perhaps if the player shopped at one store the majority of the time, its neighboring shops would lower their prices. Or depending on what point players are at in the game, or what side-quests they were completing, relevant items would appear in the shops, maybe at inflated prices.

As for socioeconomic conditions around shops, Chudley’s Fine Goods and Fancy Trinkets Emporium is a perfect example of this principle. That shop could only be placed in Castle Town, where the rich folk and the royals dwelt. In any other Twilight Princess province the place would’ve looked silly and been entirely ignored by inhabitants because the price range was insane. Accordingly, upcoming games can have shops that fit specific areas. Let’s say you’re in a thieves town, prices should be low because the economy in a town full of convicts would not be booming and shop owners would be robbed more often if they sold more “valuable” items. However, in a well put together society like maybe a Zora’s Domain, prices can be higher and more stable because everyone in that area is well off. Additionally, shops can sell area specific items and at high prices. While monopolies should be avoided, Goron’s should be able to charge whatever outrageous price they want to for a Goron Tunic because it’s a one of a kind item.

I feel that in implementing a realistic economy, there’d have to be some cap on how abundant rupees can be. To avoid inflation, rupees wouldn’t be produced at rates high enough to result in their being tossed around in grassy knolls. 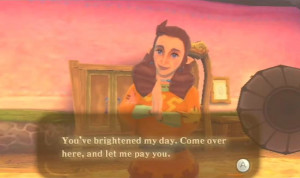 It isn’t a necessary change of course, but Link could be made to work for his money much like he did when vacuuming Pipit’s Mother’s house in Skyward Sword. This would allow for closer relations with NPCs and maybe doing favors for shop owners would get Link special bargains on goods sold there. If Link does a good job with these errands, “word could get around” and make it easier for him to get jobs, or be paid higher, or cop deals with sister-stores to those that he’s helped. Although, that would be getting into a Karma Meter of sorts, which is an entirely different issue.

All in all, I don’t think an economy in Zelda is a necessary thing. I’d rather Zelda Wii U skip complicated extra mechanics like this and focus on gameplay and just being finished at this point. But, it is an interesting idea with a lot of possibilities for players to make Link’s shopping life easier and interact more with NPCs. I do think it would be cool to see prices fluctuate depending on how often Link shopped at one place versus another, the idea of competition between shops I very much like.

Where do you stand on whether there should be an actual economy in Zelda? Do you think it’s something you’d like to see in Zelda Wii U? Are there any other ways for Zelda to have a structured economy, or other ways having one would affect gameplay? Speak your mind in the comments!