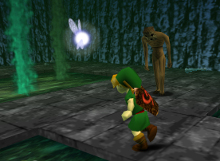 I’ve mentioned numerous times while I’ve worked on Zelda Dungeon that I never really found the ReDeads scary in Ocarina of Time. Or… anything at all scary in Ocarina of Time, actually. Things like the ReDeads and the Shadow Temple both provided too familiar and cliched of ideas without enough suspense and danger to make me feel scared. With that said, that doesn’t mean there aren’t cool moments with these undead beasts, and it doesn’t mean that they won’t scare other people. My favorite moments with the ReDeads have nothing to do with the Bottom of the Well or the Shadow Temple, but rather are their first appearances within either time period in the game.

The best one is the first one in my opinion; the first ReDeads are fought within the Royal Tomb, on the way to collecting the Sun’s Song. Nothing particularly scary — barring perhaps a boss battle against Gohma — has occurred yet in the game, so this moment really caught me off-guard. After being warned about “lurkers in the dark”, the player enters a disturbing room filled with poisonous, green, and smoking water — some kind of acid? — and the zombie-like foes, likely taking a fair amount of damage and dealing with a lot of startling ReDead screams (and stuns) before making it to the song itself and using it to escape safely.

I think this is perhaps the one moment where Ocarina of Time actually does have some pretty spooky buildup, because the Graveyard is a pretty eerie place in its silence, and the scene where Link plays Zelda’s Lullaby and the Royal Tomb opens up is eerie in itself — without even introducing any monsters yet — and this adds to the suspense, which culminates in the fairly surprising introduction of one of the game’s goriest foes. This is at the very least halfway decent horror buildup, especially when considering the later “scary” dungeons which by comparison provide far cheaper spooky moments without proper suspense. This part of the game never scared me, but it was at least a bit alarming and certainly provided a number of the core aspects of horror: Suspense played it up and created a bigger surprise when you actually saw the things, and the amount of damage the ReDeads do coupled with their ability to freeze you and just generally make it a nightmare to fight them makes them decidedly late-game foes, and throwing them at you this early creates danger. It was pretty cool. 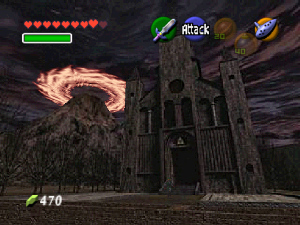 The second moment happens almost immediately after leaving the Temple of Time as an adult. This is a section of the game filled with a lot of cutscenes and story revelations, and again it deals with surprise as it’s discovered that Ganondorf has not only taken over Hyrule, but ruined Castle Town. And what is the only thing left moving in those ruins? Zombies! Obviously! What were you expecting?

No buildup here… at least not for the ReDeads; any buildup during this part of the game leads up to the first things you see when you leave the Temple of Time: The ruined town itself, the state of Death Mountain, etc. No, there’s nothing building up suspense for these ReDeads, but that’s okay because just them being there is disturbing enough. Are these what’s left of the people of Castle Town who didn’t make it out? Or are they the reason everyone left? We never find out.

The ReDeads eventually settle into being fairly mundane enemies, encountered a number of times in late-game dungeons, but, at least for their first two appearances, they’re treated with special care, and that’s pretty cool. ReDeads are certainly not the first undead foes in the series, and there was already a precedent for there being a few spooky foes in a Zelda game, but they are the first ones in a 3D game and certainly the goriest and most screwed-up by that point. It’s a fairly shocking jump from sprite mummies to 3D shrieking hunched over zombies, and Ocarina of Time acknowledges this contrast. Had the ReDeads just shown up without ceremony, they would have still been disturbing but not that impressive, but as it stands their first introduction is built up and then unleashed, while their second leaves you with questions and concerns. It’s pretty great, and as a result these two moments are some of my favorites in Ocarina of Time. 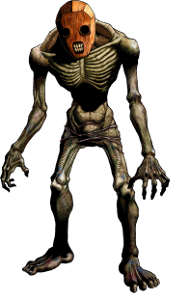