Long-time Zelda director and producer Eiji Aonuma has made a giant claim in an interview with CNET by referring to Zelda 3DS as possibly the most “inventive” title in the series yet. Mr. Aonuma confirmed that this new handheld Zelda game would feel particularly different than its predecessors and mentions that it happens to be a far “different point of view”. Other details about Zelda 3DS were mentioned in the interview including the influence behind Link’s ability to turn into a drawing, and why 3D visualization is important for this exciting sequel to the SNES masterpiece, A Link to the Past.

Would you like to learn more about the “drawing mechanic” and how Nintendo was influenced to use it for Link? Be sure to click the jump below and find out for yourself!

Mr. Aonuma states in his interview with CNET that the inspiration for Link’s drawing ability came about after reminiscing on Link’s battle with Phantom Ganon in Ocarina of Time. In that fight, Phantom Ganon flies in and out of paintings on the walls and looks to be a drawing while inside one. Link’s drawing ability gives him the accessibility to areas previously blocked off and looks to be a very unique mechanism. Apparently, the development team thought that if Phantom Ganon was able to utilize this power then what could happen if Link had it? 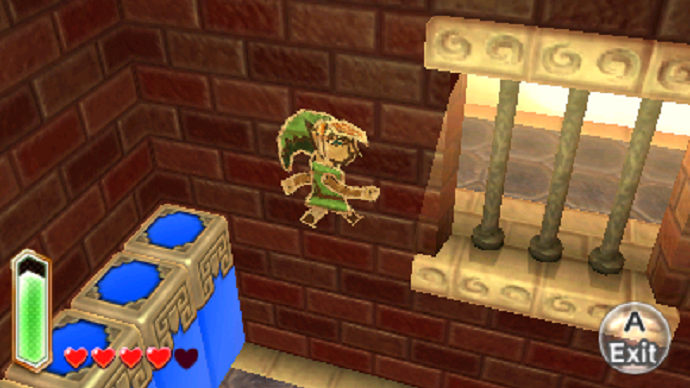 Mr. Aonuma also hopes that every gamer gives the full 3D effect a try as he believes the full experience can only be known when playing in the 3DS’ native resolution. He does claim, however, that players should enjoy the game even if they’re only playing in 2D and viewing differently to 3D users.

Do you believe in Eiji Aonuma’s claim that Zelda 3DS might just be the most “inventive” title in the series? Are you happy with Nintendo’s inspiration for “Drawing Link”? Will you be playing Zelda 3DS with the full 3D effect? Please share your thoughts and opinions in the comments below!

Comments
Sorted Under: Site Updates
Tagged With: 3DS, A Link to the Past 2, Eiji Aonuma, Zelda 3DS