Update: The information that was found just below has since been confirmed… sort of. They come from a German translator who works close with Eiji Aonuma. It was part of a document that was preparing Aonuma for E3 in just a few days. There is still some skepticism, from myself included, but the folks over at Zelda Informer where this originated are claiming 99.99% validity. 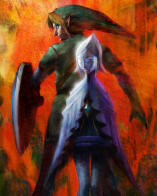 According to the folks over at Zelda Informer, Eiji Aonuma’s first page at E3 has been leaked and it contains several new pieces of information. Jumping straight to the point, here is what the alleged leak has stated.

1. Zelda Wii’s official title is “The Legend of Zelda”. There will be no subtitle.
2. The game tells a story several hundred years before Ocarina of Time. It also answers the question of how the Master Sword came into being.
3. The fairy-like girl is a very important character in the game. Her Name is Zordiana.
4. The Hookshot is also in the game and it has new abilities. It will not pull you immediately to the target you aimed at. Now it is possible to swing with the Hookshot, like with the Grappling Hook from TWW. The Hookshot makes no use of Wii Motion Plus.
5. Sometimes you have to “draw” a specific symbol on a door with your sword to open it.
6. The Bow controls are very similar to the Bow controls in Wii Sports Resort, as the script shows.
7. There are two levels of difficulty. Aonuma made it though, Miyamoto didn’t want to include it. There is a Normal Mode for amateurs. The Hero Mode has no “Super Guide” included and the enemies are tougher.
8. The on-stage dungeon, which is also playable at E3, isn’t a Dungeon as we know it from the Zelda series. When entering a Dungeon, you will not notice you are in one. It will be a smooth gradation. There will be dungeons with no bosses and bosses with no dungeon. The “dungeon” you are able to play at E3 will be an ice level. It will be the first “dungeon” in the Game.

I’m still very skeptical as to the validity of these rumors and the source hasn’t been able to confirm them just yet, but we should know in just a few days at Nintendo’s E3 Press Conference this Tuesday. Number 1 on the list is very much plausible, although I’d personally much prefer if the game was given its own sub-title. They’ve sub-titled every single game to date and not doing it now would just lead to confusion as to what game you are referring to in the Zelda series.

Number 2 seems very possible as well, as a story that predates Ocarina of Time is perfectly plausible in my opinion. Number 5 is the one that stands out to me. I just don’t think this is going to be a common feature in this Zelda game as it seems to be very Phantom Hourglass or Spirit Tracks like. It doesn’t seem rather unique at all and hardly something that would be ‘front page’ material on Eiji Aonuma’s list. What is so important about drawing on doors, considering the last two Zelda games on the DS used that a lot?

Number 7, concerning the Super Guide seems realistic, and the reasoning makes sense. Personally, I don’t think the Super Guide is a good fit for Zelda and would much prefer the ‘helper’ type hints that we have gotten from Navi, Ezlo, Midna, and other sidekicks before. Something that guides you in the right direction rather than explicitly showing it to you. Nevertheless, at least a “Hero-Mode” will be put in, but honestly, I don’t think main fans will appreciate it as much. For me, whenever I toss in a game that has ‘Easy, Medium, or Hard’ difficulties, I always choose Medium, with the idea that in the second play through I’ll try it on Hard. Problem is I rarely play most games a second or third time through and once I’ve actually completed the main quest, the notion of just adding more difficult enemies here and there doesn’t seem like a big draw to me.

So what do you think about this latest batch of alleged leaked material? Let us know by posting in the comments and be sure to stay tuned here at Zelda Dungeon over the next few days as the clock winds down to E3 2010!