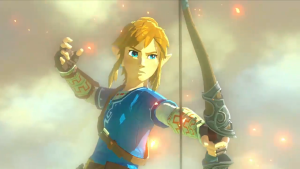 It’s common knowledge at this point that the ‘first’ Ganon(dorf) was the Demon King Demise, and that the ‘first’ Zelda was the mortal being the Goddess Hylia took after she sent the human race skyward and away from the war on the surface. This took place in Skyward Sword. The console game released in 2011 did explain the beginning of several key elements we see in each game. For an example other than the main characters, there’s the making of the Master Sword and the true meaning behind it’s seal on evil. However, there still seems to be some lose ends. The following theory from YouTuber HMK talks about Link, and whether the Link from Skyward Sword is the ‘first’ of the reincarnation cycle as Demise and Zelda/Hylia were, or if there was someone at Hylia’s side during her initial war with Demise. HMK analyzed Skyward Sword and the limited footage we’ve seen of Zelda Wii U and has come up with a theory that might just answer the question of Link’s true origin. Make the jump to check out his video and to hear what he has to say.

Is it really possible that the open world we’ve heard so much about in Zelda Wii U is the surface before Hylia’s war with Demise? Could the Link shown in the few trailers we’ve seen in the last couple years be the ‘first’ of his reincarnation cycle? Of course, we won’t be able to know for sure until Zelda Wii U is released and it’s plot is revealed, but, I personally disagree with this theory completely. In fact, my counterexamples are rather simple.

Hylia chose Link from Skyward Sword to be her destined hero in a last attempt to destroy Demise. She set up a series of challenges and trials for Link to overcome and prove himself as her hero. For instance, the forging of the Master Sword and collecting the three pieces of the Triforce. Hylia set out this fate for Link, as well as the fate of Zelda, her mortal vessel. What Hylia did not anticipate after the defeat of Demise was the curse he brought down on the three of them. Demise is the reason for the neverending cycle, therefore, this Link, the first to wield the Master Sword as well as the first to save Zelda, truly is the ‘first’ Link of the cycle. I think that the reason there isn’t such an emphasis on this fact as there was on Zelda and Demise is because Link wasn’t ever supposed to be an overly processed character. He was meant to be the vessel in which the player shared his journey as the ‘hero’.

Like I said, though, the theory can’t be completely laid to rest until the plot of Zelda Wii U is revealed. But what are your thoughts on this theory? Do you believe that the Link from Skyward Sword is the ‘first’ of the cycle, or that there is more to Link’s origins than we’ve been told? Let us know your thoughts in the comment section below.