Unwinding Areas in The Legend of Zelda Part II 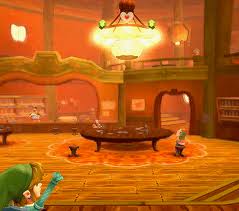 Hello dear readers! I’m back this week to discuss another few unwinding areas several of you had mentioned in the comments back in Part I. The areas chosen this week are: Zora’s Domain, Skyloft, The Lumpy Pumpkin, and Lon Lon Ranch. Aside from the numerous temples and mini games throughout the Zelda series, it is also commonly  known for it’s many distinct locations set across Hyrule. Some of which are considerably relaxing and great places to unwind when taking a break from the main quest. Hit the jump to dive in! 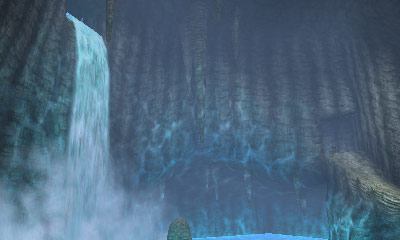 More than anything in Ocarina of Time, Zora’s domain offers the most sense of tranquility in the entire game, with its soothing music and hushed waterfall. All the while, every Zora residing here, though not many, are simply on stand-by if that. There aren’t even any predators within the domain. Whereas just outside, you’ll find jumpy tektites, Octorocks and intensifying music as the sun sets. Zora’s Domain does well in not only presenting a peaceful environment comprised of water and harmless Zoras, there’s just simply not much going on. Aside from the missing Princess Ruto, who is ultimately saved, there’s still hardly any presentable sense of fear or worry. Not even from King Zora himself, as he hardly expresses any concern for his beloved daughter. Goodness, even after the domain is thawed out after being completely frozen, no one seems to be even the slightest worried. The fact the domain is nearly barren, also supports its natural peaceful environment. Regardless, what little you can do is either shop for few items, play around with torches or gather some extra rupees playing the diving game; all of which are optional (with the exception of attaining the silver scale) and allow the player some spare time away from the main quest. I remember spending hours here, having Link perform that graceful dive of his and bottling up fish to pawn off for some hefty rupees. Overall, the domain may have little to offer, but it’s compelling serenity of absolutely no pressure or demand to hurry along, made this area a consciously relaxing one. 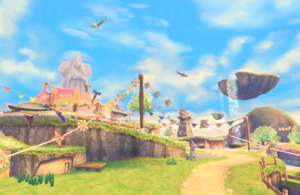 Like most villages you begin with in the series, Skyloft presents a naturally peaceful and soothing environment. Given that this is a village in the sky, hardly little harm can be found here. The entire village is coated in vibrant colors that help set its rather cheerful mood. Not to mention the very catchy and bustling background music on loop. Unlike some villages in other games from series, Skyloft appears to be detailed to quite some extent with; decorations flowing in the wind, graceful clear blue skies with fluffy clouds and a floating waterfall to top it off. There’s even a nifty bazaar that sells quite a variety useful items. Even the villager’s homes appear to more distinct and convenient at that. If you’re low on some hearts or want to explore around at night, you could simply take a nap in a friendly villager’s bed! Worried you might slip off the edge of the this floating in the sky? No worries, that’s what the Rescue Knights are for, even though you might already have a Loftwing of your own to save you. Joking aside, the Knight Academy can also be seen as an reinforcement of safety. As for a sense of unwinding, little sites such as a couple of pumpkin patches or the waterfall area are always fun to explore. Furthermore, being a floating island in the sky among many, there’s a handful of other areas to indulge in. Whether it be the Fun Fun Island, Bamboo Island or gliding on your Loftwing, there’s plenty do if you’re looking to unwind. 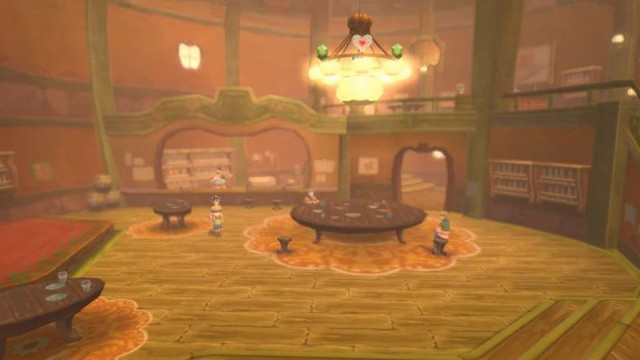 Surprise! While we are on the topic of areas in the skies of Skyward Sword, I thought the Lumpy Pumpkin deserved some appreciation. With not much to elaborate on, there are some genuinely cool aspects of the pub here. In the middle of nowhere (in the clouds anyway), there floats a giant pumpkin bar on the island called Pumpkin Landing. The inside clearly welcomes a cozy and unwinding feeling with its warm emitting glow of oranges lights. The interior matches the pumpkin theme, and bar offers pumpkin soup. You could hang around here for some time, unless you’d rather not participate in the lovely harp duet with Eagus, if you haven’t already. The duet may have stooped numerous players prior to earning a piece of heart, but not for all. Some might agree that playing the duet here as memorable and fun, while others not so much. Otherwise, the Lumpy Pumpkin a rather soothing place to hangout in. After all, it is completely optional and to some, a fine unwinding area. 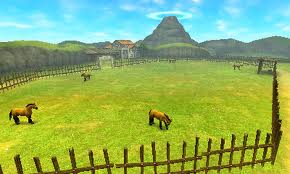 Reputable for its simple and realistic ranch structure, Lon Lon Ranch is commonly known to be fan favorite area in both Ocarina of Time. It’s has most everything one might expect to find at ranch (alright, aside from a few things): a cozy ranch home, some classic farm stables, a handful of cuccos, dairy cows, and their famous Lon Lon Milk. The music played here heavily contributes to the entire ranch theme. Undeniably, it just sounds country and very well suits this area like none other. In fact, I would literally spend at least a good hour loitering around the ranch with Epona as adult Link when I was a wee lad. Even though there might not be much to do, some might agree that Lon Lon Ranch is one of the most memorable and unwinding areas in the game. The only potential danger lurking there were some minor Guay, or cuccos if you annoyed them enough. Above all else, the ranch is entirely optional. Learning Epona’s Song, winning her from Ingo, and attaining either heart piece heart or a bottle are by no means necessary for completing the game. Despite Ingo taking over the ranch, at some point, there’s absolutely no pressure at all.

That wraps it up for this weeks unwinding areas. Brief I know, though next time I’ll add bit more. The list goes on for areas anyone might consider unwinding. Some more memorable than others, and some simply enjoyable no matter how negligible they may seem. Are there any places in the Zelda series you would consider unwinding? Favorite areas that kept you coming back? Let me know in the comments below and I’ll be glad to elaborate on some in the next part! By the way, sorry for lack of an odd thumbnail this time, software issues.