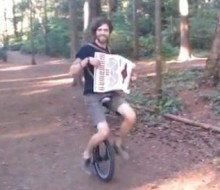 Anyone who has played Ocarina of Time can probably hum the iconic theme for the Lost Woods off the top of their head. But how many people out their have seen it performed in a real life forest? Even if you have, chances are it wasn’t being played on an accordion by a bearded man riding a unicycle. Well now you finally get to witness that sight, courtesy of the internet.

YouTube user Trichromaticist recently posted a video showing off his accordion rendition of the memorable Lost Woods melody. Although a certain galactic bounty hunter beat him to it by a few years, the unicycle aspect of this performance is a new twist.

As far as videos go, this one isn’t particularly long, coming in at less than half a minute. Yet most will probably agree that it’s a pretty awesome half minute. Although the tune itself is slightly distorted by a doppler effect (extra points to all you science buffs out there who know what that is) halfway through, the oddness of the spectacle more than compensates for such audio hiccups.

If you ask me, this guy couldn’t have picked a more fitting backdrop for his performance. The fact that he’s playing the Lost Woods theme in an actual woods certainly enhances the video’s enchanting surrealism. You can also just tell by the grin on his face that he’s having a blast while doing it.

Tell us what you think of this musical cyclist in the comments below. The same musician can also apparently be seen here, playing both the Lost Woods and Gerudo Valley themes for some passing Zelda fans. Even without the flair of his unicycle, I’d say he’s still more than worth a listen.