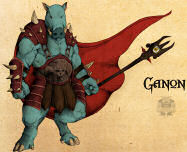 The folks over at 411mania have put together their list of the Top 10 Video Game Villains of all time, and what do you know, our resident villain Ganon, or Ganondorf, has been listed at #5. Of the 13 primarily single player Zelda titles, Ganon has been the main villain in five of the games, but has made countless other appearances. He was not exactly one of the main villains in the Adventure of Link, but his character did play a prime role in the storyline. Ganon was also one of the final nightmares that Link battled in Link’s Awakening. Considering the combined ending of Oracle of Seasons and Oracle of Ages, then yup, you got Ganon in that one as well. In the most recent Zelda adventure, we got a character known as Malladus, who for all common purposes is just Ganondorf with a different name. Here is part of what 411mania had to say about Ganon.

Ganon, or Ganondorf –depending on which game you’re playing – is by far the most memorable villain in the entire Legend of Zelda franchise. He follows the trend of being incredibly nasty in both plot and gameplay, offering one of the most satisfying fights in the entire series. His evolution from pig-faced pixel beast into the monstrous, powerful King of Darkness that we face in the more recent titles makes him a rather interesting character. I’d like to think that his ability to worm out of the Sage’s seal was due to more than a creativity drought on the part of Miyamoto. I’ll give him the benefit of the doubt.

The Zelda series has seen a few other villains, notably Vaati from the Four Swords titles and The Minish Cap, as well as some one off villains such as Majora and Bellum. However in my opinion none of them have captured the mystique that is Ganon. Ganon is just a legitimate bad guy who always has a certain level of fear whenever he’s on the screen. Perhaps in more recent times Ganon has grown a bit stale, with each more recent story becoming a bit more predictable than the last. Although, I still think there’s still time for Ganon in future titles to reinvent his character and perhaps bring back some of what has made him one of the top villains in gaming history.

So what are your thoughts on Ganon? Has he become such a regular villain that you actually like him and perhaps in a cynical way you want him to succeed? Has he grown stale to the point where you are sick in seeing him in so many Zelda titles? Let us know by posting in the comments below.