Posted on December 21 2015 by Brandon Schmitz 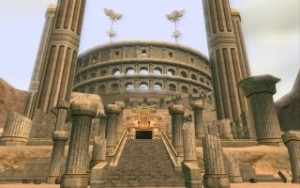 One of my favorite aspects of Twilight Princess is its appreciation for context. Just about every locale has a unique story to tell; the dungeons, especially, stand apart from those of most other Zelda games. Rather than serve as generic holy sites, each dungeon goes a long way toward giving Hyrule a lived-in feel. City in the Sky highlights an ancient civilization, while Snowpeak Ruins makes the player feel like a guest in someone’s home. That said, not having all of the answers can be fun. Much of the mythology surrounding the Arbiter’s Grounds has been shrouded in mystery, which, throughout the past nine years, has led to a ton of theory crafting. YouTuber Dr. Wily recently discussed his interpretation of the abandoned structure. Hit the jump to check it out!

There are myriad theories regarding this dungeon. Some believe the Arbiter’s Grounds to be a Gerudo hideout — perhaps even Ocarina of Time’s Spirit Temple — that the Hyrulean military repurposed. Others, meanwhile, subscribe to the idea that it’s a wholly original structure. Wily’s video definitely sheds a unique light on the conversation; although the exterior of the Grounds is reminiscent of a gladiatorial arena, I often viewed that as a purely aesthetic design choice. The interior, as well as in-game dialogue, presents it as a former prison. Admittedly, it never occurred to me that this place could be one and the same. I assumed that Stallord was just another form of execution, but the weapons protruding from his head do lend some credence to the notion that prisoners were pitted against the beast for entertainment purposes.

What are your thoughts? Do you think there’s enough evidence to support Wily’s theory? What’s your interpretation of the Arbiter’s Grounds? Let us know in the comments below.