The Truth About Tingle

Posted on March 29 2013 by Dathen Boccabella 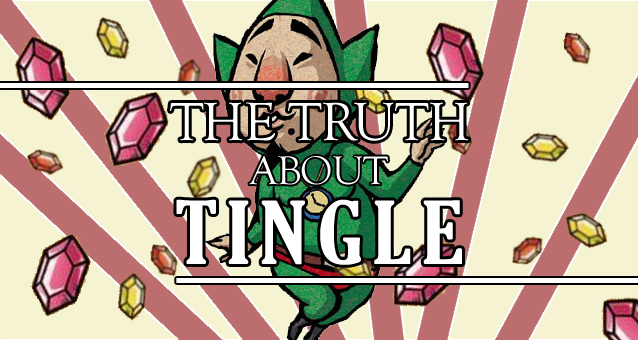 Tingle. He started as a simple bizarre character selling maps in Majora’s Mask. Now he has three games of his own and has appeared in numerous Zelda titles. Some people like him and some people don’t. No wait, let me try that again. Many people hate him with a deep fiery passion, most aren’t terribly fond of him, a few are indifferent, and a handful are hopelessly obsessed with him. Yeah, that’s more like it. For decades Zelda players have believed that they are Link – that’s why he’s such an empty shell. Sorry to burst your balloon (err. umm…bubble right?), but we are not Link. I am not Link. You are not Link. We are actually Tingle. That’s right folks; we are the inspiration for this superb specimen of a character. In the eyes of Nintendo we are all a bunch of Tingles!

But hey, it’s nothing to get your tight red undies in a knot over. I mean, let’s have a look at the successful life of Tingle (the original Majora’s Mask Tingle that is, the one that we inspired the creation of). He is a 35 year old male that is all alone. He spends his days dressed up like Link, claiming that he is a fairy boy and muttering his magic words – “Tingle, Tingle! Kooloo-Limpah!” Yeah, shut up. He thinks everyone will want to steal his awesome magic words (rightfully so) and talks about himself in third person like he’s mentally-challenged. He wants to be Link. In The Wind Waker Tingle wants Link to “Rescue poor Tingle from this place and take him to where you and your kind live in splendor!” Clearly, he has issues. And clearly Dathen thinks talking about yourself in third person makes it damn hard for Dathen to blend your quotes seamlessly into his paragraphs.

Anyway, back to our beloved Tingle from Majora’s Mask. His father, the Swamp Tourist Center Guide, is disappointed in him. Honestly, I can’t see any reason why. “That spoiled child is off playin’ hooky again! A child his age has no business searching for fairies…!” Tingle knows it too, as he tells Link, “My father tells me to grow up and act my age, but why? I tell you…Tingle is the very reincarnation of a fairy!” Moving along to Tingle’s occupation, he sells maps… to help his father. That’s right; he still lives at home at 35, working for his father. Utter legend.

So… err. That’s you, and that’s me-apparently. The stereotypical gamer. Tingle. Unattractive overweight males (sorry girls) that will/do live with their parents at age 35. They/you/I/we also have no friends and spend our time playing games while our parents think we should grow up. We are unemployed, but help our fathers with their work on occasion. Still not convinced that you’re Tingle yet? What about that dress up party that you went to as Link? Yeah, exactly. What about all of those doodles of Master Swords and Triforces on your school books? Yeah, you Tingle. Tingle sketches maps of Termina because he just can’t stop thinking and doodling about Zelda. (The game that is, not the Princess, and not that type of doodling you dirty minded Tingle you.)

If anyone had actually played that game called Freshly-Picked Tingle’s Rosy Rupeeland, then they would have picked up a valuable piece of information. The seal to this whole (or)deal. I will take this chance to shamelessly plug Zelda Wiki.org. They provide quality articles. Visit Zelda Wiki.org – a Legend of Zelda encyclopedia that anyone can edit – for all of your Zelda information requirements and more. One such quality article is on Tingle, believe it or not. This is what it says about Tingle’s Freshly Picked Rose… whatever it’s called. “Tingle is not a person, but a state of being; a curse that can befall every living being.” Oh my holy Din. Sweet Nayru mother of Farore. Tingle is a curse. It is the curse that befalls gamers. You’ve seen the South Park episode, and what World of Warcraft can do to innocent children. Tingleism is a curse. We are cursed. Link, if you can hear us please defeat the evil monster in the Rupee Temple and break the curse on us. Oh right, Link doesn’t actually exist.

Now Mr. Nintendo figurehead who was the character designer in Majora’s Mask, I’d like to have a word with you. What exactly are you implying. What the hell is a Tingle? Why are we Tingle? If knowing that we are Tingle explains one thing, it is this: everyone hates Tingle either because that’s what they are or that’s what they fear becoming. People that love Tingle – well, whatever floats your boat. Personally I’ll leave that all to the good ol’ King of Red Lions. In the end, there is some encouragement to take from all of this: the simple fact of knowing that we are not a stereotype. Well, some of you Tingles might be!

Comments
Sorted Under: Editorials, Zelda News
Tagged With: No tags were found for this entry.