The Entirely Valid, Completely Believable Theory of a Tetraforce

Posted on April 14 2013 by Dathen Boccabella

This article was written before the existence of Hyrule Historia and Skyward Sword, and as such may contain information that seems dated. It is part of classics month, and as such should just be viewed as an enjoyable and ‘outside the box’ type conversation.

For the infinite amount of theorizing that goes on in the Zelda community, it’s no shock that there are conspiracy theories hiding amongst them. There are people who still cling to the Triforce being obtainable in Ocarina of Time, just like others cling to the 1969 moon landing being fraudulent. Of all Zelda conspiracy theories, none have ever come quite as prominent as the theory of the Tetraforce.

Everything you know about the three Golden Godesses – Din, Farore and Nayru – and the Triforce – Power, Wisdom and Courage – just forget it. Because according to this theory, it’s all a big sham. There are actually four Triforce… err, Tetraforce pieces. It is quite a laughable concept, at least now it is. When the series was younger, in the days of Ocarina of Time, a Tetraforce may have had some bearing (not really), but these days it’s just absurd. With those cynical impressions of the theory laid down, let’s take a look at where the reasoning for this insane idea comes from.

The notion of a Tetraforce (or Quadraforce as it’s called by the more ignorant conspirators) first arose in Ocarina of Time, with the design of the Hylian Shield. Below the bird of the Hylian crest a fourth yellow triangle can be found (see below-right). Ignoring that it could simply be a matter of shield design, some people begun the “Tetraforce Cult”, insisting that there must be a fourth piece, and have never let go of the notion since. 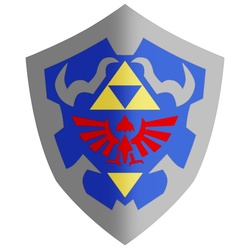 According to this theory, the term “triforce” refers to the triangular nature of each individual part. In other words, that they are tri-angular – with three (tri) sides. Yes, triangles. Complex stuff. This argument is generally made with the point that in the original Legend of Zelda only two pieces were known about, however they were still referred to as “tri”-forces. So, with that said, this means there could be three Triforce pieces, four pieces, 12 pieces or even 73. Four is chosen because it is somewhat more verifiable.

The number four plays a significant role in the series, so the conspirators say. There are four elements in The Minish Cap, four giants and landscapes in Majora’s Mask, not to mention – wait for it – Four Swords and Four Swords Adventures. Oh snap! There is also the four light spirits: Eldin, Lanayru, Faron and Ordona – corresponding with the golden goddesses respectively: Din, Nayru, Farore… and… wait…

Four Light Spirits corresponding to three gods? This is another piece of evidence commonly used for the theory, although “Ordona” also corresponds to the end of “Farore”, just as Faron corresponds to the beginning. There’s also the little tidbit that Ordona’s territory isn’t actually a part of Hyrule, but it stands – The Light Spirits somewhat add to the Tetraforce notion.

I find it amusing that the argument is made for four being a significant number in the series, all the while overlooking the significance of the number three. This is Zelda folks, known for the infamous three dungeons, plot twist, three dungeons and then final boss formula. Three Pendants of Virtue, three Spiritual Stones, three Goddesses Pearls, three pure metals, and it goes on. But what about there being four pieces of the Fused Shadow, but Link only has to collect three? Or four Mirror of Twilight pieces, but only three for Link to collect? Conflicting…

Jumping back to the mention of the Four Sword, there are also Four Links in those games. The theory now draws from the colors of Link’s tunics (shush, don’t laugh). The conspirators say that if Green is Farore, Red is Din and Blue is Nayru – then purple (or indigo for you pedantic people) must be the color of the fourth Goddess. Yes, of course, there must be a fourth Goddess if there is to be a fourth piece, right? Perhaps the only sound logic in the theory.

Now, we must search the whole series for usage of the color purple to discover who the Goddess is. It must be Majora… no wait Vaati…or what about Zelda being a Goddess herself? (cough) Conspirators tend to agree, though, that if two pieces are in the hands of righteousness – Link and Zelda – then two must be in the hands of evil – Ganondorf and someone else like Majora, or Vaati. 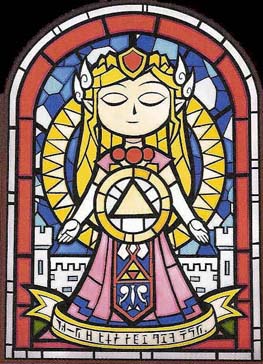 Due to the purple color, the fourth Goddess is referred to as the “reb-dog” of the bunch. Purple corresponds with the Shadow Temple, so the fourth piece is the evil Shadow Triforce… Ahh, so Bongo Bongo is the Goddess? Oh, no, right. But get this; there is a triangle on the design of the Shadow Medallion from Impa. Coincidence much? Conspirators think not!

If the fourth Goddess is a rebel then it could be Majora, who lives in the land of the Four Giants who let their people build giant-penises for the three golden-goddesses. I’m not sure if that’s extreme hate or extreme fondness though. Hey, Four Golden Goddesses for Four Male Giants, if you catch my drift. It’s all starting to check out isn’t it?

As was mentioned earlier, despite the Fourth Goddess apparently being “evil”, some think it is Zelda, firstly because of her possession of the Light Force in The Minish Cap – which some claim to be the fourth piece, and for this one very fact that kind of seals the deal. In The Wind Waker, Zelda is called Tetra. I bet you didn’t see that one coming!

There’s also Zelda’s appearance in the Oracles, where she claims to be the “Oracle of Hope” along with the other oracles: Din, Nayru and Farore. Oh, and let’s not forget the great fairies in Majora’s Mask, who correspond to the three Golden Goddesses, except for the fourth, who is the Great Fairy of Kindness. Maybe we’re after a Goddess of hope or kindness. Hold up a sec, conspiracy theory. I though the fourth goddess was a rebel? Shouldn’t it be despair and wickedness, not hope and kindness? Consistent much.

Then there are a whole other plethora of ideas for the Fourth Goddess. Some say the Goddess of Time – despite that role easily being fitted to existing goddesses (check out our debate on the matter). Some make up The Goddess of the Sand, you know, the Desert Colossus of the Gerudo. You see, rebel Goddess and apparently rebel Gerudo people. It fits……

It goes on. Some say Link. Others try to bring the Fierce Deity into this and make it really awesome. It isn’t. Others still say that the shadow Triforce is possessed by Shadow Link. Frankly, you could say that Tingle is the goddess of the fourth Triforce piece and this theory wouldn’t lose any validity, because it has got none to lose.

“Why write about it then?” Ahh, a just question my liege. Despite the obvious truth that it doesn’t work, the Tetraforce is quite an interesting study for those who get into it. To see all of the connections drawn (read as “straws clutched”) can be quite fascinating. Most normal people wouldn’t ever think of a whole genius theory from just one shield design, but some legends once did! Truly commendable.

Funnily though, that shield design was actually purposefully changed to remove the fourth piece in later games – to clear up the misconception. (You’re right, that wasn’t funny!) If that isn’t enough though, Miyamoto has actually denied the Tetraforce’s existence, as will Nintendo if you send them an e-mail, but there is no letting go for the conspirators. And why should they let go? Clearly Miyamoto has nothing on their genius theories!

Sarcasm finally aside, the notion of four Triforce pieces, instead of three, is against everything in the series. We know the backstory, and it never mentions a fourth Golden Goddess. We’ve completed the Triforce, and there has only ever been three pieces. Not to mention that there are only three characters – Zelda, Link and Ganondorf – bound to the Triforce’s existence. I will concede, however, that if there is a fourth piece, it is undoubtedly Ghirahim’s “Triforce of Fabulous”. Now that you know all about the Tetraforce, let us never speak of it again. Plz, ‘k, th’nks!

Comments
Sorted Under: Editorials, Zelda News
Tagged With: No tags were found for this entry.